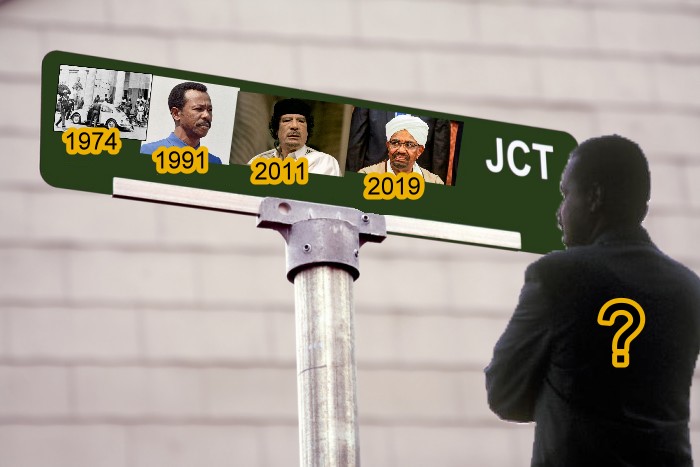 Blind following is suicidal. This fact is observed in the affairs of the People’s Front for Democracy and Justice (PFDJ), the government party, which has been accepting and propagating ‘facts’ outside the boundaries of truth and reason.

The PFDJ, whose members are told they are at the front for democracy and justice, two important universal concepts that are non-existent in the Eritrean milieu, is on a collision course with adversity.  The members pay no heed to the concept of democracy which they ridicule (as a western concept) and uphold the country’s justice system which totally ignores recognized standards of justice across the world.

The PFDJ, as recently made evident by the ‘peace accord’ with Ethiopia, is renowned for oscillating between one extreme and another in a monkey see, monkey do fashion – all done in positive response to government vagaries. “We are him and he is us” they sloganize by referring to Isaias Afwerki’s blunders …yes, they are him alright.

What the members seem to ignore is the fact that this illegal PFDJ rule, just like other dictatorships, will one day come to an end. The question is when and how will its way out of this conundrum play out?

Their members need to prepare themselves for the overwhelming realization of the institution’s closing stages - when the curtain falls on its operation. It will be stripped of the armaments which had given it power until now, and its members will face a reckoning not only with their consciences, but in a court of law.

People will certainly ask serious questions concerning the pain and injuries that the PFDJ inflicted upon Eritrea – terrorising the public, exploiting the young via endless policies, muzzling the public via unjustified incarcerations, causing rampant destitution, instigating bankruptcy of the majority of small businesses, exercising brazen control of the society, affecting undignified existence of its citizens, impelling chronic exodus of its youth, prompting the flight of the conscientious ex-fighters, carrying out unlawful government affairs, instituting systematic and haphazard corruption, eroding family values, committing various human rights abuses and so forth.

It is important to mention that we hope the public will not opt out for revenge because that will not resolve any wrongdoing; but making the perpetrators to face the full force of the law will perhaps be an option to pursue. Crimes have been committed and those crimes will be settled in stipulation of evidence and in accordance to the rule of law.

Echoes of the Jungle

Dogmas, chants and formulas, the mechanical tools designed to taunt and intimidate the ‘wayward’ are the manacles of this immature group of people who disregard the decree of what goes around comes around.

It is unfortunate to witness how the PFDJ proxies are made to garnish government’s ineptness in times of despair. They seem to be running out of options in sugar-coating the president’s erratic comportment.

Although the government is losing the battle of public opinion, its kingpins continue to ingratiate themselves to it as if, in the end, their loyalty will render them a promising prospect amid government circles.  Of course, these are reveries of the clowns.  There are plenty of examples to show the government uses them until threadbare. It suffices to catalogue the fates of the stranded government activists around us to date.

PFDJ members are indeed going through an intense experience in their lives as the president swings back and forth from branches that sway in pendulous movements. Actually, like Tarzan, the president is using swings from hanging vines to change directions at great speed, leaving his activists behind lost in the jungle.  Although the PFDJ activists are trying to mimic the sound echoed in the jungle, they are beginning to realize Tarzan's jungle call is disorientating them!

Country going to the Dogs

To make sense of the sub-culture that has been created by PFDJ agents and the shameful about-face they continue to stick to (their flip-flopping stances) are indeed perplexing.  Seeing their efforts coming to naught, seeing the ugly marks they have left in our world are further proofs that PFDJ has become the Frankenstein of our time, eating away at our core beliefs and morals.

Will there ever be a eureka moment for PFDJ members when they finally realize that the country is going to the dogs?  Will they ever see the light and do the right thing?  At the moment they are locked in a structure of scoring points with those who are campaigning to bring a government worthy of the Eritrean people. But they are dodging the reality on the ground without any signs of shrinking back.  No scruples, no ethics, and no reflection. They are indeed moving about with plenty of blind spots.  And that is why PFDJ’s activity is suicidal.

Eritreans have survived the effects of indigence, indignation, seclusion, disappearances, deprivation, mistreatment, manipulations, disparagement and repression.  Having withstood all these things can only lead to a recovery process which will, perhaps, bring all activists closer to one another.