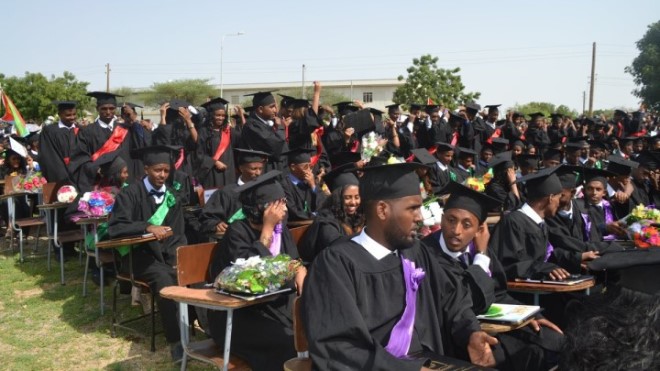 For instance, a story that was printed on 11 July 2019 regarding graduation stated that the Hamelmalo College of Agriculture that is based in Keren graduated 473 students this year including 283 females with post graduate, first degree and diploma in nine fields of study.

The story added that the college, in its 12 commencements, has graduated 4725 students in various fields of study to date. That can very well be true.  Eritrea’s true strength is its people. But much to our dismay, the country continues to suffer a major ‘youth drain’ of sorts where most of the graduates and vocationally skilled leave the country for greener pastures.

Where are these graduates heading?

Perhaps the above question can be answered by another set of questions: ‘where are last year’s graduates now’? Or ‘where are those who graduated the year before last’?

Eritrean graduates are victims of the chronic push-and-pull factor that has been beleaguering the country for over a decade.  Eritrea is training thousands of youngsters only to see the back of them after graduation.  That means the rosy picture the media paints is only smoke and mirrors.  Yes, the sad part of the story is the media does not disclose how many of these 4725 graduates are still in Eritrea.

Soon after graduation, the graduates take matters into their own hands.  They, like their predecessors, disperse and follow escape routes to Ethiopia, Sudan, Djibouti, the Sahara desert, Libya, Egypt, Israel and other parts of the world.  As we have been witnessing it for years, many of the new graduates will end up in refugee camps, and the shores of Europe.  That is the real story of the ‘graduation blues’ in Eritrea which is deliberately overlooked by the country’s media. Therefore, the accounts government media present are quite misleading.

Again, the truth of the matter is those graduates will turn up in our cities and towns in a year or two after graduation.  This has been the recurring exodus we have been witnessing for the last decade.

Fleeing graduates cannot only be financially costly for the regime, but can also have a negative impact on morale, corroborate the country's reputation, and prevent top graduates talent becoming an asset to the country. A country that cannot retain its graduates loses heavily on all fronts.  The whole mess is of the regime’s own making.  The system does not give the graduates the space, structure, tools and prospects they need to develop.

It is fascinating to witness how every graduation ceremony is enveloped in utter government hype. Irrespective of the hoopla, the facts on the ground is quite different.  Actually, the situation for the graduates has tragically remained the same - that is, with no end to years of servitude.

The graduates have grown up in a country that does not respect citizens’ rights, a country without a constitution.  They have grown up in a country that only offers a bleak future.  The system around them not only saps their energy away, but also kills their enthusiasm and goodwill. What is the use of continually churning out graduates by the thousands every year only to lose them afterwards?

One can say that Eritrean youth are stuck between a rock and a hard place - in a situation without any future prospect. They have been ‘forced’ to leave because of the stifling internal political environment and endless National Service which is comparable to bondage.  On the other hand, the attraction of a better life abroad and opportunities for building one’s own family is pulling them away.

They have grown accustomed to the dreary way of life that is filled with pitfalls on a political landscape devoid of nurturing qualities. Eritrea is now geared towards an artificially induced psychosis of 'nationalist' hysteria and an incessant propaganda of the 'greatness of its youth'. The sad part of the story is that it quickly dawns on the new graduates that they are merely stuck in the so called ‘Eritrean development project’ – a project that has become the main source of Eritrea’s chronic youth drain.