This article is based on the story of the late Professor Antonio Cesare Manetti which appeared on BBC Tigrnya on 3 Dec 2021.

The story demonstrates how profusely inspired Eritreans are clipped into debility. 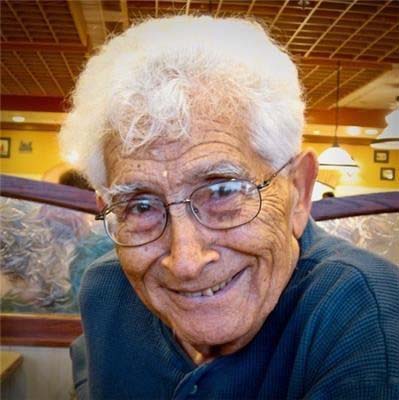 Prof Cesare Manetti was known as Cesarino among his friends in Eritrea.  He was born in Asmara on 4 Mar 1928.  In mid-40s he travelled from Asmara to Rome to pursue his education.  After a long way around the world, and a very productive life in the US, he returned to Eritrea after independence with boundless enthusiasm.

That boundless enthusiasm, unfortunately, slowly eroded because the Eritrean government denied him the necessary support to set up shop within his sphere of expertise.

“Many people were saddened when the indomitable professor who persistently tried to setup a medical centre in Eritrea died of COVID on 13 Jun 2021 in Asmara” said Rufael Fessehatsion, a friend who pursued Cesarino’s undertakings and health conditions till the end.

“The sad part of his story is that his dreams were not fulfilled as he imagined them to be”, added Rufael.

According to Rufael’s account, as soon as Cesarino retired in early 90s, he shifted his attention to Eritrea. He pledged he would do everything to abet the country of his birth.  Driven by his resolution he solicited mutual aid from the government of Eritrea; he needed a licence to operate in Eritrea.

He travelled to Eritrea at least 20-21 times to obtain authorisation from the government to set up a medical centre; but much to no avail.

Cesarino’s obituary described him as a “respected pathologist, mentor, philanthropist, and humanitarian who celebrated family and friends, knowledge and education, and social consciousness.” 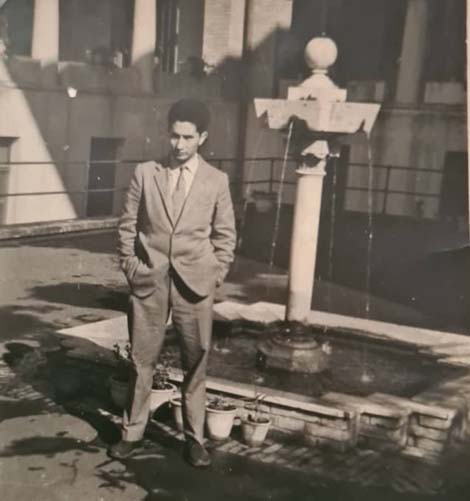 What was Cesarino’s plan and desire?

As mentioned above, Cesarino was a pathologist.  In other words, he was a medical healthcare provider who examined bodies and body tissues.  He was responsible for performing lab tests, helped other doctors reach diagnoses. Basically, Cesarino was an important member of the medical team.

Cesarino practised his profession in Rockford, Illinois, USA, until retirement – that is over three decades ago.

In keeping with Rufael’s description, his principal aim was to transfer his know-how to Eritrea. The end plan was to help the ailing at no cost to the government of Eritrea.  “Unfortunately, the government failed to lend a hand”, Rufael expounded.

Rufael’s father, ato Fessehatsion Solomon, and Cesarino knew each other when they were young boys in Kidane Mehret, the main Catholic quarter of the old Asmara.  Adey Sellas Ghebrezion, Cesarino’s mother, was also related to Rufael’s family.  Moreover, adey Sellas is the godmother of Rufael’s older sister – the renowned ex-combatant Aster Fessehatsion who has been held incommunicado without charge since 2001.

“I remember meeting Cesarino for the first time when he came to visit my family in Asmara in the early 1990s”, said Rufael.  “I also remember watching him with great interest and listening to his uniquely flavoured Tigrinya”, he recalled.  “I was drawn to the dialogue he was having with my mother at the time as he spoke fondly of my late father”, he said.

As soon as Cesarino learned of Eritrean independence he started thinking of ways to help Eritrea. In fact, he took it upon himself to acquire a master’s degree in public health administration before he travelled to Asmara.

What happened to Cesarino when he visited Asmara?

Cesarino, with all his credentials, had full confidence that he would be allowed to work in Eritrea. As he mentioned it in his ERI-TV interview, he was brazenly derided for his ‘audacious’ petition to help the Ministry of Health instead.

The official told Cesarino that the Ministry identifies its needs and explores potential candidates for its projects itself.

Cesarino, naturally, was dismayed for he only offered to share his expertise for free – expertise much needed in Eritrea.

Cesarino spent most of his life working at St Anthony’s Hospital in Rockford, Illinois, as head of Pathology Department, and taught at University College for many years. He also worked as a volunteer in India, Kenya, Nepal and Madagascar.

He and his wife (Theresa) raised their four daughters in Rockford.

Eritrea was colonised by Italy in 1890; and over the next five decades an estimated 20,000 children were fathered by Italian men, many of whom were military officials or soldiers living in the country for a short period of time. Many of them never acknowledged their children.

Cesarino’s father was Italian and his mother was Eritrean.  His father owned a large agricultural estate in Adi-Gombolo, Eritrea. Cesarino grew up around his father’s agricultural estate, Keren and Asmara (around Kidane Mehret).  He attended his early childhood education at Catholic boarding school.

It is astounding when one listens to Cesarino narrating his childhood stories in perfect Tigrinya. He uses phrases such as ‘Adna’ (our country), ‘deQi-Adna’ (our countrymen) as he refers to Eritrea. Unlike many mixed children of his generation, Cesarino managed to read and write Tigrinya very well.

Adey Sellas, his mother, was from a village called ‘Emni Tselim’.  She, being mindful of the importance of her own culture, she sent her son to attend Tigrinya lessons at ‘Enatye Fitghe’, a nun – a home tutor.

Cesarino spent a great deal of time with his mother after his father passed away in Keren in 1940. Cesarino was eleven then.  He left the boarding school to minimise cost and moved in with his mother in Kidane Mehret.

When poverty struck his mother began to brew Suwa (local beer) and bake Injera (staple food in Eritrea) for sale. And Cesarino, on his part, in order to help his mother cover expenses, went out to the streets of Asmara to sell any items he got hold of – such as cigarettes and chewing gums … etc.  to passers-by.

A couple of years after his father died, the Italians were defeated by the British; and a military administration was set up in Eritrea. Many Italian soldiers began to leave Eritrea; and many civilians stayed behind to man the civil service and to run the factories and institutions they owned.

Cesarino, as cheery, energetic and upbeat as he was, he managed to win a scholarship to the city of Rome.  There he finished his secondary school education and enrolled at the University to study medicine. He studied alongside the Silla brothers (Nando and Fiorello), renowned physicians in Eritrea.

As he studied medicine, Cesarino helped in translating documents from Italian to Tigrinya, and Tigrinya to Italian. He also translated for Eritrean elites who visited Italy for training – those with pro-Italy inclinations. He even worked temporarily at a radio station that was transmitting pro-Italian despatches to Eritrea in Tigrinya. Italy was campaigning for Eritrea to remain as its protectorate in early 50s.

Cesarino, as he studied in Rome, continued to communicate with his mother in Asmara by writing her letters in Tigrinya. In fact, he managed to invite her to visit him. 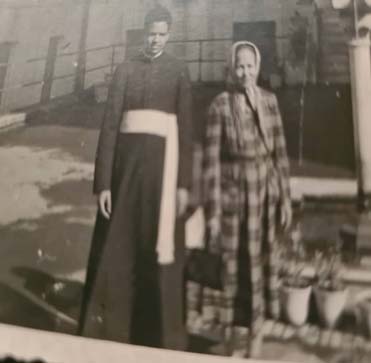 Adey Sellas in Rome (circa 1960): posing with Abba Gabriel – a student at the seminary in the Vatican.

After he finished his studies in Rome, he moved to the US for specialisation in his field.  He liked the American way of life and decided to stay there for good.  He stayed there until retirement.

“Cesarino did not only love his family dearly, he also conducted his familial duties very seriously”, his daughters proclaimed during his memorial service.

His colleagues testified that he had a lot of respect for knowledge and its various mechanisms in improving people’s lives.  “He cared about community life; and he was a highly conscientious individual” they asserted.

Federica, one of his daughters, remembered her father as a pleasant, gracious and entertaining man who loved long-distance running.

“I remember my father when he ran in Cleveland at the age of 88 for the last time.  My daughter Natalia and my husband joined him in that run”, she said.

Indeed, Cesarino was fond of marathon and half-marathon races. All the medals he accumulated over the years tell the story.  Many also remember him as he ran in the streets of Asmara during his early visits.

His obituary noted that Cesarino loved to travel. He travelled far and wide, and he had keen interest in people’s cultures and languages. He was fluent in reading and writing in Spanish, French and of course, Tigrinya, Italian and English.

Cesarino, the man who was admired by his peers and colleagues, loved by his family members for his lasting affection towards them, respected by his friends for his kindness and earnestness died in Asmara at the age of 93.

As Rufael stated, Cesarino always wanted his remains to be laid to rest in Keren next to his mother; but he was buried in Tsetserat (Asmara) instead.

“Cesarino really wanted to spend the rest of his life in Eritrea”, said Rufael. “He wanted to impart his expertise to Eritrean doctors; and that is why he travelled to Eritrea so frequently. Relentlessly, he discussed his project with the officials at Ministry of Health”, he added.

After he was frustrated by government officials he decided to work with a group of nuns within the Catholic Charity Organisation. He, after a lot of hard work – by providing resources and technical as well as educational support - he managed to setup centres in remote parts of Eritrea.

However, on 17 Jun 2019, the government of Eritrea ordered the 22 health centres run by the Catholic Church to be handed over to the state. Most of them were eventually shut, including the centres Cesarino setup.

“Cesarino became very depressed after the clinics over which he toiled were shut”, said Rufael.  “All his dreams and hard work dissipated just like that”, he added.

Before his death, Cesarino seldom left his home near Monopolio, which was located in Ruba Anseba Street, after the incident.