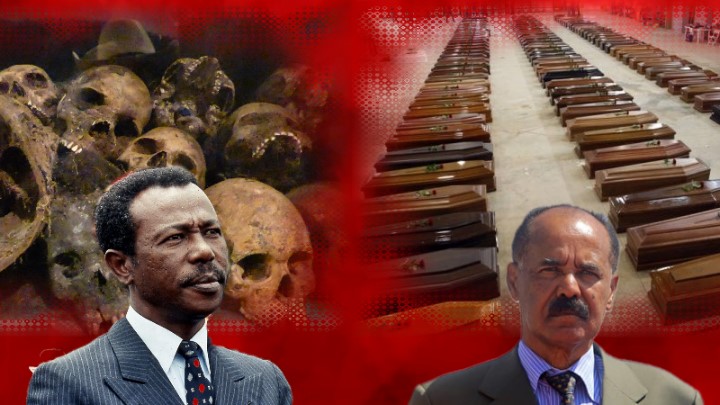 Who would have ever thought that Isaias Afwerki would be on the same list of historical archives as Menghistu Hailemariam!  Strange as it may sound, this is a case of how certain traits are passed from one person to anouther. Isaias fought Menghistu tooth and nail and then he ended up assuming his traits.

They say that history will always catch up with the deeds of heads of states. Indeed, history will judge societies and governments — and their institutions — not only by how repressive they are or how well they served themselves, but also by how ineffectively they responded to the needs of the poor and the helpless.

The first image that comes to mind every time Mengistu’s name is mentioned is bloodshed. Mengistu’s regime is estimated to be responsible for the deaths of over a million Ethiopians during his reign.

Menghistu purged rivals and made himself Ethiopia's ultimate ruthless dictator. Amnesty International estimated that up to 50,000 people were killed during the Ethiopian Red Terror Campaign alone.  The militia groups that were armed by Menghistu, and functioned by attaching themselves to the ‘Kebeles’, the neighborhood watch committees that served not only as the eyes and ears for the regime, but also as hit squads,  went on a killing spree as if there was no tomorrow.

The crimes Menghistu committed will never be erased in this life and the one after.  Future generations will remember him for his evil deeds. And there is nothing more damning than that.

Isaias Afwerki started his career as a freedom fighter; respected and feared by his fellow fighters.  It did not take him long to brandish his personal power in order to control others.  And then something went wrong after independence.

One can say that independence created an opportunity for Isaias to become the unelected president of Eritrea; with that he noticed there were a lot of privileges at his disposal.  Eritrean independence which was meant to be everything for Eritreans brought a hollow existence for the majority, and power and indulgence for him.

As his domineering side took over he went out of his way to dominate everyone and control everything around him.  In the process he ruined the country and the lives of the majority of Eritreans.

Eritrea, on Isaias’ watch, became a land of extremes.  Analysts are still trying to decipher what made him so dangerous, delusional and ruthless.

Here is a quickly compiled list of wrongdoings that shows how Eritrea has been teetering on the brink of bankruptcy:

The list goes on. It is sad to witness that the number one desire of Eritrean families in this day and age is to see their children flee to neighboring countries or beyond. Eritreans have already sassed it out that there is no future for them in their own country. This is the major source of the Eritrean tragedy!

Dictators are Prisoners of their own nature

Dictators are literally prisoners of their own nature. They are dangerous, delusional and they have no sense of history.

President Isaias Afwerki knows what Eritrea was like when he was a boy. He knows he has failed in salvaging whatever was there during the Italian, British, Haile Selassie, Dergue eras.  He knows Eritrea has plunged into misery on his watch.

He seems to be in a major fight for self-preservation.  People are not on his side; and of course, history is not on his side.  If he accidentally lets go of power, then the tide will turn against him.  He knows that.  So he is in a struggle to staying alive and saving himself – he cannot think of other things but how to escape the wrath and anger of the people when their time comes.

History will be extremely unkind to Isaias because he has ruined the lives of so many citizens, spoiled the future of a generation of youngsters and reversed the country’s overall development.

As time goes by, his credentials will certainly make him plunge into deeper controversy.  Controversy or not, unfortunately, Eritreans will continue to suffer as long as he is in power.