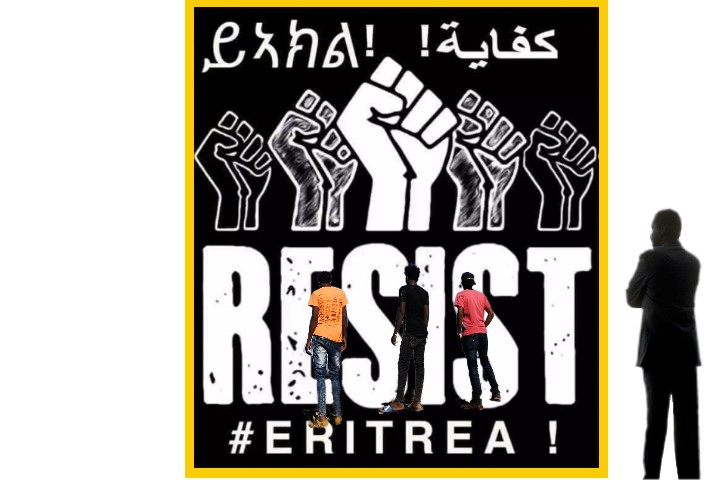 What Eritrean activists have demonstrated time and again is that in Eritrea exists a severe kind of dictatorship that is increasingly consuming the country.

The activists have shed light on what is really happening inside Eritrea from a political, social and economic perspective.  They have continually put the glare on government secrets, illegal acts, abusive conduct, vindictive stance and more.  That has created, rather deservedly, negative publicity for the government.  Therefore, the one source of criticism the PFDJ regime has not managed to silence is the voice of those out of reach citizens - that out of Eritrea world.

Again, the regime has not managed to break the ties between the inner and outer circles of Eritreans who are distressed by the ever escalating conditions in the country.  An average Eritrean has access, at least, to family members, close and distant relatives, old friends who continually feed him/her with crucial information.  That link cannot be broken.

Nowadays, the young people are beginning to find their voices more and more efficiently.   The suppressed people inside the country continue to expose Government ‘machismo’ and their counterparts abroad are challenging the regime by exposing its repressive ways to the outside world.

The ‘Enough is Enough’ campaign is a good example of that ‘unbroken link’ Eritreans enjoy in various communities.  And the campaign is gaining momentum.

At this juncture though one needs to ask what the young activists actually want to achieve.  Since they are at the forefront of the campaign, and they have managed to come this far, will they take us a bit further down the road?  Or perhaps all the way?

The older generation will need to support them now so the young can take us to the next phase – there is no other way.

Do our young activists wish simply to condemn the oppression and protest against the system like the previous generation of activists?  Or, do they wish to end the oppression, and replace it peacefully with a system of greater freedom, democracy, and justice?

Many old activists assumed that if they denounced the oppression strongly enough, and protested long enough, the desired change would somehow be realized. That assumption was not entirely correct.

They have managed to bring the problems Eritrea is experiencing to the attention of the international community, which was advantageous in many aspects of the struggle, but they failed short in achieving the desired outcome.

Now, how will the ‘Enough is Enough’ campaign jump to the next step?  How will the young activists deliver the campaign to the regime’s doorstep? By the same token, how will the old activists assist them in achieving their goal?

That means we the older generation did not see many things coming during the early days - the gradual build-up of dictatorship.  We were too trusting; we believed in the outcome of the armed struggle for liberation; we believed in the dispositions of the ‘Tegadelti’ (combatants) and we never thought things could go wrong in post-liberation Eritrea.

Our mistakes continue to haunt us until now.  We thought it was nothing as the EPLF waved us off; what made us certain that power was going to eventually be transferred to the people?

We believed in our dreams; we never thought the EPLF would morph into PFDJ, a deformed, corrupt and obnoxious institution.

Again, we did not see it coming when an ‘independent’ Eritrea sloped towards depriving citizens their basic rights – rights that were better served during previous colonial regimes.

One can say that we were too naïve in the beginning when the government was laying the groundwork to entrench itself. The EPLF fighters had other plans; we were simply the add-on.   By the time we realized what was happening we tried to re-adjust our frame of mind; but it was too late.

Now Eritrea, thanks to PFDJ, is one of the top refugee producing countries in the world.  That is stark evidence how the government turned against Eritreans.

Literally, we were intoxicated by our own dreams; and that is why we were caught sound asleep.

Second Step: Learning from the mistakes of old activists

When we turned into activists we made many regrettable mistakes. We hope the young activists are not going to commit the same mistakes.

Well, frustration ensued and we were consumed by the very fire we started; and that gave the regime a lifeline.

The young activists should watch out by not falling into cracks created by us. They should trust their own instincts; they should follow their heart.