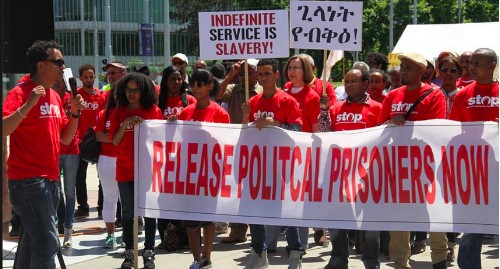 Hastily drawn up and poorly considered plans by several governments appear about to provide succour and support to one of Africa’s most notorious regimes.  The process is led by the European Union, which is planning to provide a substantial bilateral aid package worth € 312 million to Eritrea. This is almost a three-fold increase from 2009, and comes despite scathing assessments of the human rights of Eritrea by bodies including Amnesty International and Human Rights Watch.

A group of international scholars, who have worked on the Horn of Africa for many years, has united with Eritrean activists and former Eritrean diplomats to denounce the proposal. The plans are driven by a desire to cut the number of Eritrean refugees flowing out of the country and seeking asylum in Europe and beyond. These proposals will not halt this exodus. Nor will it do anything to prevent hundreds of Eritreans dying while crossing the Sahara and the Mediterranean.

A previous attempt by the EU to embrace the regime in 2007 ended in failure. Then it was tied to assurances that Dawit Isaak, a Swedish-Eritrean journalist, arrested in a widespread crackdown in 2001, would be released and allowed to leave the country.  Not only was the assurance reneged on, there was no discernable improvement in the country’s notorious human rights regime.

The current plans come after vague assurances that Eritrea’s policy of indefinite military conscription will be reduced to a period no longer than 18 months. But President Isaias Afeworki, who rules the country with a rod of iron, has made no official policy announcement to this effect.

Rather, an official UN Commission of Inquiry on Eritrea, has been repeatedly denied the opportunity to visit to country, to undertake a comprehensive and authoritative review of its human rights practices.

The appeal calls on the all government’s to:

In addition we call on the Eritrean government to provide unfettered access to the UN Commission of Inquiry, so that it can fulfill its mandate.

We observe with grave concern the stream of official assertions by governments and official representatives, which suggest that there is a real prospect of “change in Eritrea.” This is being used to justify changes in official policy towards Eritrean asylum seekers that affect their protection. We make the following observations:

1. A recent report by the UK Home Office suggests change in policy in Eritrea, referring to a controversial Danish Report that has fallen into disrepute in Denmark.

2. The Danish report has been the source of much controversy in Denmark, after the main source and named source of the report, Prof Dr Gaim Kibreab declared he had been misquoted and misled and he subsequently demanded that all citations should be removed from the report. Prof Kibreab has also criticized the content of the UK report in a commentary of 25 March 2015.

3. The Danish media has widely reported that officials were bribed to change the content of the report (with promises of pay-rises) – an allegation officially denied by the Danish Immigration Service. The officials concerned have subsequently resigned, after denouncing the methodology and the conclusions of the report. There were further accusations that the report was politically driven and that the Ministry of Justice “provided guidelines on the report’s content and conclusions in order to tighten the practice in Eritrean asylum cases”.

4. The report has not been officially withdrawn, but its conclusions are no longer used as a reference for policy in Denmark. The immigration service has announced that illegal exit and desertion from the national service in Eritrea remain grounds for granting asylum in Denmark. However this has not been communicated in English by the Danish authorities and the Report by the British Home Office does not highlight this crucial change in policy.

5. The Report by the UK Home Office on Guidelines for Eritrean Asylum-seekers makes 48 references to the Danish Report, advancing and building on the conclusions of the discredited Report. It conceals the serious flaws of the Danish Report and obscures the criticism the report has met. Its intent appears to be to mislead, rather than serve the truth.

6. The Danish Report, which underpins the report by the UK Home Office, has been widely critiqued for its content, by, among others, UNHCR, Human Rights Watch, Europe External Policy Advisors, Stop Slavery in Eritrea, Asmarino, and the Report by members of the Eritrean Diaspora “Listen to our Agony”.

7. The EU Commissioner Neven Mimica announced that a substantial bilateral aid package of € 312 million has been prepared to support the Eritrean regime – an almost threefold increase from 2009, despite the deteriorating human rights situation. News reports have suggested that the aid would be provided in exchange for promises that Eritrea would curb migration. This is despite the fact that the EU’s policy cites human rights as an essential element for development cooperation. Human rights groups have protested, pointing to the devastating human rights record in Eritrea – the central driver of refugee and asylum migration.

8. A Report from the Norwegian Immigration Service and a debate in the Canadian Subcommittee on Human Rights have followed similar lines, suggesting that the situation in Eritrea has changed. At the same time the Chairman of the UN Commission of Inquiry on Eritrea, Mike Smith, pointed out in the oral debate of the interim findings of the Commission regarding the conditions in Eritrea (such as the national service) that the Eritrea government has refused to given the UN Commission on Inquiry permission to visit Eritrea. Furthermore, a recent mission from Switzerland concluded that there was no evidence of change on the ground.

9. It is clear that there is no evidence that the government of Eritrea has implemented any change in its human rights regime, including its conscription practices. Instead it has given hearsay promises about what it may do so in the future—promises that are vigorously disputed in great depth and detail by the testimonies of refugees who have fled the country within the past twelve months.

In light of the above we urge that: