As a follow up to the June, 2009 “Enough is Enough” campaign, the Eritrean Global Solidarity (EGS) leadership team held extensive lobbying and networking activities in Washington DC between November 19 and 20, 2009.

The two day lobbying effort created EGS an opportunity to conduct intensive conversation about the deepening crisis in Eritrea and its immense implications with the leadership and representatives of following governmental and non-governmental intuitions and offices: 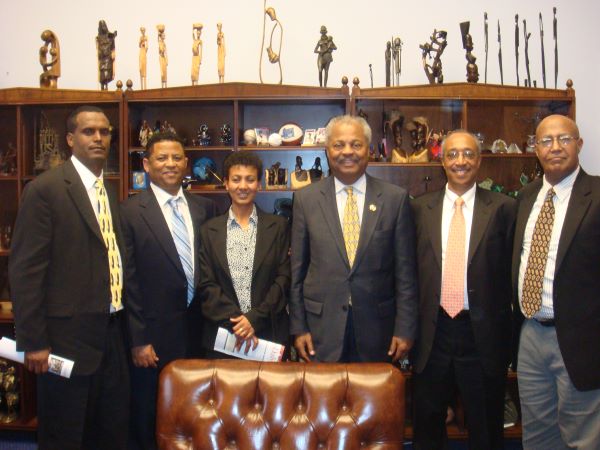 The EGS representatives were welcomed warmly and accorded ample time to present detail briefings on the mission of EGS, the need for a compressive effort to deal with the two critical issues: The devastating famine and the ever-growing refugee question. On the other hand the need to expand  contact with EGS, encourage and support for the growth and development of the independent Eritrean media –websites and radio broadcasting, help expedite the asylum process for Eritreans in the USA, find ways to assist EGS in its effort to upgrade its organizing and lobbying skills was discussed.

The highlight of the two days effort was the highly anticipated and long awaited meeting with his Excellency Congressman Donald Payne. A very extensive and highly informative exchange of ideas took place between the congressman and EGS representatives in a very conducive atmosphere. EGS was given the opportunity to present its perspective on the general and current crisis in Eritrea with an emphasis on the need to address the devastating famine and the expanding refugee issue urgently. The channel of communication has been opened with a possibility for further exchange of information and ideas on some of the critical issues raised at the first meeting.

The overall assessment of the EGS representatives about the current information dissemination, networking and advocacy effort was that there seems to be a clearer understanding by all parties we met and a much better appreciation about the gravity of the suffering of the Eritrean people and the Eritrean national crisis and the need to make an urgent effort by all institutions to positively help the Eritrean people achieve their desire for lasting peace, rule of law, justice and democracy as soon as possible.
The ground work for extensive working relationship and possible areas of future joint efforts were identifies and the need for an ongoing communication was strongly affirmed by the EGS as well as the officials of the institutions we met. As the crisis in Eritrean intensifies the Eritrean Civil societies must find ways to access international institutions and make a strong presentation on behalf of the people of Eritrea.  EGS plans to return to Washington DC in the near future to further expand its effort to engage with more institutions and   contacts made   in these highly productive meetings.