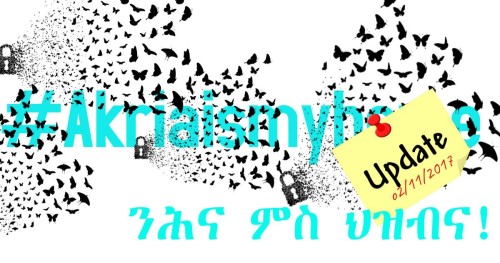 Eritrea: Asmara protestors including women and children were beaten and tortured during interrogation

(Akria 02-11-2017) following the protests in Asmara on Tuesday, and particularly the pandemonium of the shootings by government soldiers Akria was relatively calm today. This afternoon some of the students and few women who were taken to prison in conjunction with the uprising are being released. So far in Akria, we have counted 5 students and three mothers who have been released. The condition of their release was under strict order to not relate their experiences in prison or the interrogations they faced. However, people are not taking any notice of those orders and are talking about it. In the area customarily known as Taseda Tsrgia, a young student in the 10th grade told us that when he was detained they took him to the police station at Asmara Expo and was interrogated and asked to tell the names of the organizers of the march. He was doused in freezing water repeatedly and beaten up with belts.

Today the security officers quietly reopened the school and realizing that the matter has gotten the international attention they have removed the uniformed armed officers and have replaced them with two armed police officers outside the school, however residents have noticed that there is a huge presence of armed undercover security people swarming the area.

The intelligence unit has adopted a cover tactic of quietly approaching people they want for questioning and asking them to report to the local administration office as opposed to raiding houses and arresting people. Having said this those who are called are taken to undisclosed locations from the local administration offices. This afternoon alone from a single neighborhood known as Riga Somal two individuals, Mr. AbdelKader Ahmed and Mr. Negash Beyan were called in and have disappeared.

In a related news we have also been hearing that General Philipos has ordered the arrest of high ranking officers who were coordinating the government response on Tuesday for not shooting directly at protestors but allowing them to carry on by shooting in the air. Team Arbi Harnet in Asmara would like to take this opportunity to thank all those humane officers who chose not to shoot at us, their brothers and sisters.

Finally we are aware that as always the government is trying to make this into  a sectarian movement and we notice that some are buying into that propaganda, this is unfortunate, our movement is against the unjust moves of the government and against subjugation and although it started in the school the entire district of Akria have joined in . we are certain that our struggle for justice will succeed and so we call on all our people inside the country and in the diaspora to join us.