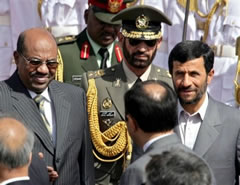 Israel, 05 April 2009: Last December Iran staged a six day of naval exercise in the Gulf and the Strait of Hormuz. Admiral Qasem Rostamabadi told state radio that the naval forces taking part in the wargame included 60 combat vessels covering over an area of 50,000 square miles, including the Sea of Oman off Iran's southern coast.

Iran has previously said it could close the Strait of Hormuz to shipping, through which about 40 percent of the worlds globally traded oil passes but the United States Navy has pledged to protect those vital shipping routes. However a message which should cause serious concern was issued last week by a senior Iranian navy commander, was quoted as saying that Iran's navy could strike an enemy well beyond its shores and as far away as the strategic Bab al-Mandab, the southern entrance to the Red Sea that leads to the Suez Canal. 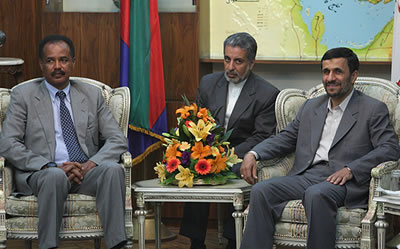 These are no empty threats: Iran is taking a growing interest in Africa generally and the Horn of Africa in particular. Iran’s goal is not clear yet, but there are concerns that it is primarily interested in propagating its fundamentalist beliefs in the region. If this is the only objective, it might be a tough sell for Shi’ite Iran as virtually all the Muslims in the Horn are Sunni with strong Sufi beliefs. The religious issue might be only a cover-up, hiding the real Iranian objective to establish its military power in this highly strategic environment. In fact Tehran has already established a long-standing and close relationship with Sudan and has made significant progress recently in improving ties with Eritrea and Djibouti. Eritrean President Isaias Afewerki visited Tehran in December 2008, and Iranian President Mahmoud Ahmadinejad went to Djibouti in February 2009, when he signed five cooperation agreements with his Djiboutian counterpart. Iranian contact with Ethiopia has been occurring at a lower level, however Iran has also engaged recently in high level contact with the leaders of Kenya, Uganda, Tanzania and the Comoro Islands.

US intelligence expert Reva Bhalla says the Sunni Arab-dominated Sudanese government and Iran's Shi'ite government have maintained close ties because they are focused on a shared anti-U.S. and anti-Israeli agenda, overshadowing their sectarian differences. She notes that Sudan is part of a wider pro-Iranian regional alliance, which includes Syria, Qatar, and militant Islamic groups such as Hezbollah in Lebanon, Islamic Jihad, and Hamas. "Iran loves to flaunt its ability to reach out to Sunni Arab powers in this region to show that it does not have to be limited to its centralistic Persian Shi'ite identity - that it has the Islamist leverage to reach out far beyond its border and exert its influence elsewhere," Bhalla said. "That is why we see, despite Iran being a Shi'ite power, it has very close ties to Hamas, a radical Sunni power. And that very much alarms the Sunni-Arab powers in the region, most notably the Egyptians and the Saudis, who all have an interest in keeping Hamas contained and the Iranians at bay."

Sofar, unfortunately, the so-called Sunni Alliance has done little to counter Tehran's Shiite strategy. According to newly elected US President Barack Obama's policy in the region, setting his priorities on diplomacy rather than military power- there is little hope for a more aggressive signal to curb Iran's regional ambitions, before they mature.

U.S. relations with Djibouti are good and generally problem free. Djibouti hosts the only U.S. military base in Africa, Combined Joint Task Force-Horn of Africa (CJTF- HOA). Although there is no indication that Djibouti desires to alter its close relationship with the U.S., its recent high-level contact with Iran bears careful watching.

Djibouti serves as the port for nearly all of landlocked Ethiopia’s exports and imports that depart and arrive by sea. Ethiopia has an even greater interest in cordial relations with Djibouti than does the United States. Because Djibouti hosts CJTF-HOA and Ethiopia is dependent on the port, Djibouti becomes an important part of a regional policy for the Horn of Africa. It is also in the interest of the United States to quietly support Djibouti in its dispute with Eritrea. But with Iran already active here, it might be too late and the US should act without delay to stop this strategic asset falling into Tehran's African network.

The United States essentially abandoned Somalia following the departure of U.S. troops from the country in 1994 after the scandalous operation 'Restore Hope' in 1993, better known as the notorious "Battle of Mogadishu", in which the US lost 18 troops in a single day.

In 2002, as part of its newly-declared "war on terror", the US was allowed to set up a military base in the strategic former French colony of Djibouti, which borders Somalia and also faces the southern entrance to the Red Sea. The base - the only military facility which Washington officially possesses on the African continent - is used both to keep an eye on events in Somalia and to patrol the strategic seaways in the Arabian Sea.

But it took a few more years to create a substantial military organization to try and stabilize the critical strategic environment. AFRICOM officially became operational as a sub-unified command of EUCOM with a separate headquarters. On October 1, 2008, the command separated from USEUCOM and began operating on its own as a full fledged Command; however, whether AFRICOM will be able to restore US domination in the Horn of Africa remains questionable. The focus of its operational domain indicates its mission as diplomatic, economic and humanitarian aid, aimed at prevention of conflict, rather than at military intervention. Without a clear strategic directive from highest quarters and deployment of impressive military power in that sensitive region, there is little doubt that Teheran's strategic ambitions in the Horn of Africa will go forth virtually undisturbed. 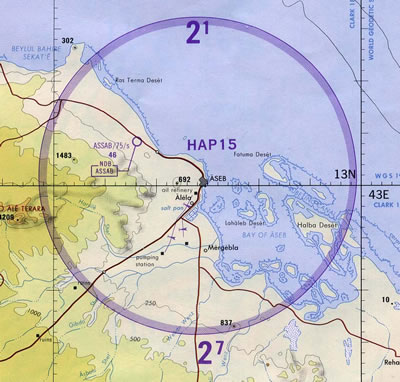 In April 2008 Iran and Sudan have already entered into a full military cooperation. This treaty is part of an ongoing, comprehensive effort by Iran to spread its influence into the strategic horn of Africa and Central Africa. Then in December 12, 2008 an Eritrean opposition site published a rumor about cooperation between Iran and Eritrea to revamp an old refinery in Assab, Eritrea. Furthermore, Iranian ships and submarines have deployed an undisclosed number of troops at Port Sudan recently. The Iranian troops are slated to be stationed in the city of Assab, reportedly under the pretext of protecting the Russian-built Eritrean Assab Oil Refinery. It seems that Eritrea has granted Iran total control of the Red Sea port of Assab, which overlooks the Bab Al-Mandeb straits. This seems to be a clear indication, as to the speed that Tehran is working to establish its military presence here.

Washington, Jerusalem and Egypt should be seriously concerned with Iranian ambitions in East Africa, especially regarding the strategic Red Sea passage. In fact, so must be Saudi Arabia. There is no doubt that an Iranian military presence in nations like Somaila, Eritrea and Sudan is virtually outflanking Saudi Arabia from the West, adding to the 800 mile long Iranian Gulf coastline facing the Arab Peninsula. This strategic move, even if it is only to gain access to vital oil refineries or other "commercial" assets, must be extremely disturbing to western strategists.

The fact is that all ships going through the Suez Canal sail through the Red Sea and pass through the Bab el-Mandeb, including oil tankers and military vessels. Shipping to Jordan's only seaport in Aqaba also goes through the straits. The Eilat-Ashkelon pipeline - pumping Azeri oil eastward to the Far East or westward from the Persian Gulf to Europe – also relies on oil tankers that sail past Assab. If that port is under Iranian control, or soon will be - officials in Washington, Cairo, Amman, Ryad and Tel Aviv should be on the alert, could this threat justify extending AFRICOM with sufficient military "teeth"?