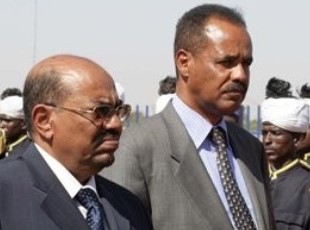 Sources from the Ministry of Information, Asmara, have informed us that none other than President Isaias Afwerki himself has ordered a total news blackout on the ongoing election in Sudan. This can easily be corroborated by the fact that all news outlets in Eritrea – radio, EriTv, newspapers and websites – be it in Tigrigna, English or Arabic, haven’t uttered even a single sentence in regard to this momentous event in Sudan, given that these presidential, parliamentary and local elections are taking place in 24 years time.

The Sudanese people have started heading to the polls on April 11, and the polls are supposed to stay open until April 13. They will not only elect the president but also vote for members of the 450-seat National Assembly, governors for the county's 25 states, and members of state assemblies. In addition, the semi-autonomous region of South Sudan will elect its own president and 171 members for its Assembly. It is hoped that this might end the civil strife in Sudan, be it in South Sudan which might eventually pave the way for its independence or Darfur and East Sudan for some kind of autonomy. Obviously, all this is not good news to the totalitarian regime in Asmara.

In Eritrea, on the other hand, there has never been an election since the young nation got its independence in 1991. All those who have been demanding democratic elections have either been exiled in foreign lands or are languishing in prisons. In fact, the latest tragic news has been that out of the 35 higher officials and journalists, who have been at the forefront in this struggle for democracy, 15 have died in detention. And as for what the future holds, in none other than the international media of Al Jezeera, the president of Eritrea has openly and adamantly stated that there will be no elections for decades to come.

The riddle now is why the regime in Asmara decided not to handle the Sudanese election the way it did with Ethiopian elections. It can claim that Sudanese elections are all sham, as it did in the case of Ethiopia. After all, the president is famous for ridiculing elections all over the world – Ethiopia, Iraq, South Africa, US, etc. Why didn’t he take that route now?

The Isaias regime is in a dilemma. Its friends are getting fewer and fewer. It doesn’t want to offend the only “friend” it has in the region, even though the relation between the two despots – Beshir and Isaias – has been tumultuous, at best. Now that both of them have been rendered pariahs by the world community, the former for his role in the genocide of Darfur and the latter for his sponsorship of terrorism in the region, they are looking for solace in each other’s arms. At this particular moment, Isaias Afwerki cannot afford to antagonize Sudan by ridiculing its elections. But neither can he extol it. Hence, his preference for complete silence and his order for a complete blackout on the elections in the Eritrean media.

The main reason why he cannot allow the Eritrean media to say anything positive about it, let alone extol it, is obvious: he doesn’t want his subjects to get “dangerous” ideas in their heads. He doesn’t want them to think that if Sudan, with its plethora of problems (civil war, religious and ethnic strife, fundamentalism, genocide, etc.) can conduct democratic elections, why not Eritrea. This being his worst nightmare, he will do anything to prevent that.

There are also other reasons why the Eritrean tyrant is worried to death by the Sudanse elections. His greatest angst is that if Sudan gets normalized, he will be denied the leverage he had all along by fighting off different segments of the Sudanese nation. At one time or another, Eritrea has helped all the armed groups in the nation – South Sudan (the SPLA), East Sudan (the Beja movement) and West Sudan (Darfur insurgents). If these different segments get empowered through elections, they won’t need Isaias to fight the central government in Khartoum. Since the only leverage the tyrant has over Beshir is through blackmailing him, democracy in Sudan would make his “friendship” unnecessary; the only leverage that he has over Beshir will be gone forever and remain irretrievable.

One of the reasons why Beshir is going along with the elections, albeit reluctantly, is the belief that it will rehabilitate him in the eyes of the international community. If so, another fear of Isaias is that if Sudan gets rehabilitated, his regime will be the only pariah left in the neighborhood. He relishes the pariah status that Sudan has attained and is willing to do anything for it to retain that status.

The last reason has to do with Eritrea’s recently attained status as one the few nations in the world to be sanctioned by the UN for its sponsorship of terrorism. One of the measures meant to be taken as a result of that resolution is an embargo on arms flow to the nation. Given the fact that Eritrea is on a war footing with Ethiopia for the last 12 years, the arms embargo section of the resolution is what the despot fears most. Isaias has been counting on Sudan to circumvent the UN inspection to get all the arms his army needs. But such clandestine acts are less likely to take place in open societies, and the tyrant fears that the democratization of Sudan will render all his illegal acts, be it money laundering, kidnapping and deporting of refugees or arms smuggling, outside of his reach.

No wonder then that the tyrant is doing everything in his power to prevent this good news that is taking place in Sudan from reaching the ears of his terrorized subjects inside Eritrea.