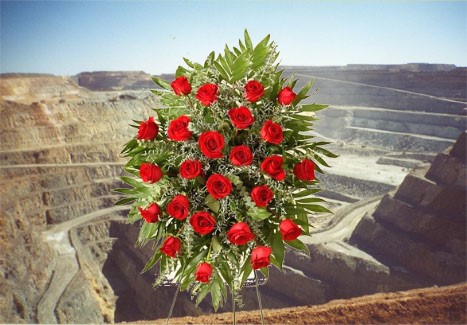 It is no surprise that the latest tragedy in Eritrea has to do with the mining projects that are sprouting all over the land – be it directly or indirectly. Selfi Democracy Eritrea has reported that on Thursday, April 08 and Friday, April 09, 2010, in the god mining areas of Hademdem and Fankon in the Gash-Barka region, in the altercation and scuffle caused by an unwarranted round up conducted by the Eritrean government to forcefully conscript workers into the army, one soldier was killed instantly. In retaliation, the Isaias regime unleashed a reign of terror for two days that killed 24 of those working in the mining area; and in its aftermath, there is a great tension building up in the surrounding area.

There are two vital pieces of information that are missing that we need to know to get the whole picture right, and both have to do with the nature of the mining project itself: Are any one of the number of Western mining companies involved in this mining project? Or is it one of those areas where locals are frequenting to extract gold on their own initiative? Either way it doesn’t bode well for the Western mining companies to be associated with such a brutal regime, especially since the tragedy has to do with the unscrupulous gold rush.

There are two things that the Isaias regime cannot tolerate in regard to the emerging mining industry in Eritrea: (a) it won’t tolerate any peasants or pastoralists or any other individuals to stray into any mining area to extract gold for their own private use; (b) and it won’t allow the mining companies to do much of the hiring.

In a news article, Poor Eritreans increasingly joining gold rush (Feb 03, 2010), reported by Jeremy Clarke it was reported that the poor of Eritrea are participating in the gold rush. Outwardly, this gives an impression of a magnanimous government and equally magnanimous companies willing to share their wealth with the poor of Eritrea. But anyone who knows this totalitarian regime knows that this wouldn’t last long. This is a regime that has been expropriating fertile farmlands from peasants and pastoralists at an alarming rate and confiscating food products from peasants at a time of famine. It was only biding its time. Given the presence of Western workers in these areas and the image problem that it has in the outside world at a time when the UN has imposed sanctions on it, it was searching for ways it could stop these small ventures without attracting much attention. There was no doubt that sooner or later it would resort to its brutal ways to terrorize these poor souls. One effective way of stopping that would be to apprehend anyone who strays into these areas and send them to the military service, irrespective of whether they have gone though that service or not.

This tragedy also raises a host of issues regarding mining and all the foreign companies – mostly Western – shamelessly lined up to do business with the brutal regime in Eritrea. We already know that Western mining companies like Nevsun Resources Ltd are letting subcontracted government-owned companies use extensive slave labor in their projects. Therefore the government is trying everything it can to prevent any workers from directly getting employed by the mining companies. And the best way it would do that is to use an old trick that it has perfected: to conduct unannounced raids in work places in search of “army deserters and conscription evaders”. Again, it doesn’t matter if the workers have already completed their national service and have been officially demobilized. Since the regime can always come up with an excuse to recall those who have already served in the military for years, no one of them has a guarantee that he/she wouldn’t be recalled to the army under any pretext.

The PFDJ (the ruling party) abhors competition, be it in politics or economy. It has bankrupted each and every private enterprise in the nation: through extensive use of slave labor, tax manipulations (for instance, exempting itself from any form of taxation), domain demarcation (it reserves certain competitive areas just for itself), etc. And when these types of manipulations don’t work, it is known to have resorted into its mafia ways of doing business: threats, extortions and killings. And that is exactly what has happened in Hademdem and Fanko.

The PFDJ can “talk” in violence only. In its latest killing spree, it is sending coded message both to its subjects (“Stay away from the gold! Stay way from the work!) and to foreign mining companies (“You deal only with me! I will get all the work that there is and all the share of the gold!). There is nothing that the Eritrean masses inside Eritrea can do. But shame to us, Eritreans in Diaspora, for letting this happen.  And shame to the Western mining companies that are doing the regime’s bidding.