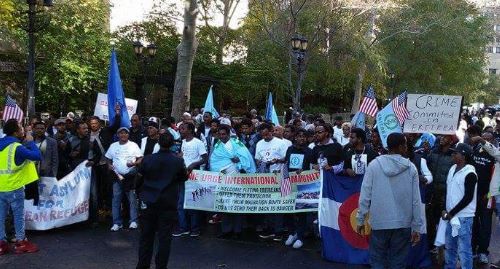 Under the heading “Massive Eritrean Resistance Rally in New York”, Awate.com wrote following the rally “This morning Eritreans held a major demonstration in New York in support of the UN Commission of Inquiry on Eritrea. The rally started with prayers by Christian and Muslim elders. The demonstrators flocked to New York in buses, airplanes, car pools and trains from cities as far as Seattle, Southern California, and Dallas.” The article captured the triumphant mood of the demonstrators quoting a member of the organisers who said “it is the first time I feel fulfilled”. Another, who came from Seattle, added “my long trip was worth it, I am inspired and rejuvenated”.

Radio Assenna.com also covered the rally extensively.  It said “More than 3000 people attended the event - Indeed it was one of the biggest Eritrean rallies yet that complimented the successful Geneva rally on June 26, 2015.  Their slogans were the voice of their conscience and a pledge to stand up against the gross human rights violations in Eritrea.

Yes, it is a sign of empowerment.  The participants have shown a fellowship that supersedes secondary differences among the Eritreans society. By adopting a common spirit of struggle and working together they have, in the most fundamental of ways, begun to rise up selflessly in the interest of their country and the oppressed Eritrean people.  The Eritrean diaspora with singleness of purpose want to end extreme repression that has given rise to the destruction of the fabric of our society and the huge number of refugees taking a dangerous journey to   exile. In many countries the refugees face kidnapping, imprisonment, torture and even worse a big numbers perishes in the Mediterranean Sea.

The big question now is whether these demonstrations, as impressive as they are, will translate into more meaningful and effective action that pave the way to end the brutal regime in Eritrea. This is the challenge the diaspora faces today and one that needs to be dealt with collectively in much the same way as our armed struggle for independence.

The political landscape Eritreans find themselves in and the phenomenon of Fortress-Europe: What can be done?

For Eritrean justice seekers this is a momentous time to raise their voice and say to Europe and the world at large that it is futile to expect the perpetrators of oppression to turn angels and solve the problem.   PFDJ bragged to stem the flow of refugees advocating that the exodus was an economic problem that has been brought about by traffickers. Furthermore it pledged to reduce the indefinite national service to 18 months. Of course that is not true. But the Europeans Union (EU) has bought the idea and announced to give 200 million Euros of aid to the Government in Eritrea.  The UK Home Office updated its country directives accordingly and in so doing is denying many would be refugee Eritreans of their legitimate rights to get protection.

In UK the Eritrean Embassy encouraged by the new Home Office country directive stepped up its campaign to repudiate human rights violations taking place in Eritrea.  They have organised conferences to that end and involved as a witness the mining company, Nevsun Resources of Canada, which itself is accused of slave labour in Eritrea with a lawsuit due to be heard in early 2016.

There were also other Eritrean Government propagandistic speaking out, including my former colleague and member of “Citizens For peace in Eritrea- CPE” Professor Asmarom  Legesse  and Ms Ruby Sandhu from Solicitors International Human Rights Group (SIHRG). The latter in particular published a 69-page grossly distorted report in December 2014 that was followed up by a number of promotional events essentially denying human right abuses are being perpetrated in Eritrea and that Isaias was apparently an overwhelming elected leader.  SIHRG’s flawed assertion was challenged by Eritrea Focus, The Eritrea Focus 39-page report provided a blow by blow to each and every inaccuracy put forward by SIHRG in May 2014 which SIHRG has been unable to counter. The report made it abundantly clear with empirical evidence that  the SIHRG report was grossly distorted, full of factual inaccuracies and  unworthy of a group that claims to champion human rights. The matter has now been referred to the UK Solicitors’ Regulatory Authority (their professional body) on the grounds that “SIHRG cannot purport to provide even-handed expertise and counsel on such issues, and represent your profession, by not speaking the truth. “Eritrea Focus” described their failure to provide a balanced report on matters that are extremely contentious as thoroughly unprofessional”.

The Eritrean Government and its proxy’s propaganda did not, in any event, go their way and indeed their efforts came to nothing – you can never hide the truth and justice eventually prevails over injustice. It was a humiliating defeat.  They met and continue to meet stiff resistance from “Eritrea Focus” amongst other lobby groups and  members of the House of Lords, particularly Baroness Glynis Kinnock, ensured  the Eritrean Government propaganda event organised in conjunction with Nevsun which was due to be held in the House of Lords was cancelled. The UK Government has also faced a flux of questions from MPs and the lobby Groups over the last year and this pressure will intensify over the coming months and until such it reverses its country directives.

At the moment, the Eritrean refugees in the “Jungle” Calais/France proved as the product of President Isaias’s Eritrea and its vivid expression of its brutality. Visitors, humanitarian and human rights activists, academicians, journalist and ordinary humane people carrying basic needs flocked to the Jungle to get real story from real people which some day will hopefully be used to bring   Isaias to the ICC.  It is those visits – because of its close proximity of Calais to the United Kingdom that enabled the media to dig the hidden repression in Eritrea.  The Guardian daily was exceptional. It covered   the burning issues of repression under “inside Eritrea” series. Below are the links of some of their articles.

Africa’s ‘Little Rome’, the Eritrean city frozen in time by war and secrecy (based on a visit in 2013)
http://www.theguardian.com/world/2015/aug/18/eritrea-asmara-frozen-in-time-africas-little-rome

From online trolling to death threats – the war to defend Eritrea's reputation
http://www.theguardian.com/world/2015/aug/18/eritrea-death-threats-tolls-united-nations-social-media

'I feel so very helpless' - letter from an Eritrean father whose son fled to Europe
http://www.theguardian.com/world/2015/aug/18/eritrea-father-letter-migrant-crisis

The country is ranked worst in the world for press freedom, its writers locked in secret jails. Here, PEN Eritrea profiles the men who fought for a free press, and paid the price.'' The Guardian
http://www.theguardian.com/world/2015/aug/19/eritrea-forgotten-journalists-jailed-pen-international-press-freedom

Online: A history of Eritrean music, from revolutionary funk to viral pop
http://www.theguardian.com/world/2015/aug/19/eritrea-music-history-eplf-youtube-viral-pop

Online: 'If we don’t give them a voice, no one will': Eritrea's forgotten journalists, still jailed after 14 years
http://www.theguardian.com/world/2015/aug/19/eritrea-forgotten-journalists-jailed-pen-international-press-freedom

An example of commentators in relations to the good work of the Guardian goes “I would like to congratulate the Guardian for trying to shed light on a country which does not often get a mention in the news, with its Inside Eritrea series.  “

It is time for Eritreans in Diaspora to seize the moment to appeal to UK and France Governments to house the refugees in safe place and open a legal passage to UK and other places. The women are particularly vulnerable they are unable to climb the fences in their dangerous journey to the UK.   Eritreans should work together to strengthen the hands of the British various humane groups such as “people to people solidarity, and “Refugee welcome” in their effort to lobby for sanctuary to refugees.  This represents a formidable challenge to the Justice seekers Diaspora in Europe and it is a litmus test to their practical activities.

Does singleness of purpose to end repression and build democratic and united   Eritrea persist in the opposition camp  in opposition to divisions along lines of religion, region and ethnicity, a legacy of “divide et Empera” by Europeans Colonialists to sustain their rule over the natives.   Are we failing to learn from history?

CPE: Is a committee formed for the purpose of studying and disseminating information about the Ethio-Eritrean conflict and its human consequences: Professor Asmarom Legesse as the   Director of Research was its main player:   CPE has the following credentials:

Therefore one may ask where professors   amazing value of humanity and justice gone.  What will his Oromo friends feel?  I still have big heart for him trying to know why this u turn

Eritrea Focus:  is an association of Eritrean professionals, business people, human rights activist, charities and NGOs with the aim of exposing the gross human rights abuse in Eritrea at the highest government authorities, influential people and think tank and other institutions in Europe. It is also researching the   role mining companies in Eritrea.