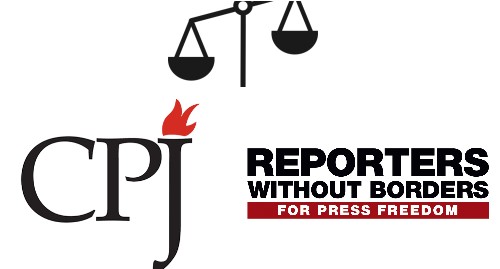 The Committee to Protect Journalists, CPJ, has put Eritrea on top of its list as the most censored country on the planet ahead of North Korea followed by Ethiopia ranking 4th. And Reporters without Borders, RSF, has for seven consecutive years named Eritrea the world’s worst violator of press freedom and Africa’s number one jailer of journalists.

Dozens of journalists have been imprisoned incommunicado without trial, some of them for over 13 years, where many are believed to have died in wretched conditions.

All Eritrean news media outlets are owned by the government and the people are forbidden from joining the digital age. Less than 1 percent of citizens are able to access the Internet, according to Mail & Guardian Africa. Mobile Internet is almost nonexistent, says CPJ, with only 6 percent of Eritreans permitted to possess mobile phones compared to about 80 percent in Kenya.

For the ruling People’s Front for Democracy and Justice, PFDJ, such revelations are out to tarnish its image. The government denounces CPJ, RSF and other rights groups as Western tools who are making a living by disparaging Eritrea.

President Isaias Afeweriki holds there is no such thing as private media. “The CIA would finance newspapers, hire journalists, open bank accounts for them outside the country and give them what they have to write in their papers,” he told a Swedish TV reporter in 2009 referring to the 2001 crackdown on independent journalists and publishers.

Asmara based American journalist Thomas Mountain is an ardent critic of western freedom and rights bodies. Mountain is supportive of the President’s measures against the rights of Eritrean journalists in 2001.  Responding to questions from this reporter, Mountain says “these characters” were paid by the US National Endowment for Democracy (NED) to “write all sorts of rubbish and lies” about the country.

Mountain claims RSF and CPJ are in the payroll of NED or the State Department, adding that “the US won’t fund an organization that doesn’t do what it wants.” He attacks CPJ, RSF and other rights entities as haters of Eritrea because the country “will never kneel down”. Human rights will be promoted in the country by first providing the people with such necessities as food, shelter, clean water, health care and education, says Mountain.

Who Funds RSF and CPJ?

Both agencies emphatically deny they receive funds from any western powers and that neutrality is their guiding principle.

CPJ Head for Africa Program, Susan Valentine, says her organization “takes no money from the US government or from any other government, and will not allow government sponsorship of any its work. CPJ raises its funds from private individuals and philanthropic organizations.”

Eritreans should have as much right as any other human being to express their ideas, share information and receive information about what is happening in their country, says Valentine.

Like CPJ, RSF is not allowed to enter Eritrea and assess the reality there by holding open discussions with journalists and government officials. Over the years, both CPJ and RSF have interviewed hundreds of exiled Eritrean journalists, refugees, diaspora activists, academics, UN agencies and many other stakeholders.

Based on its extensive interviews and research, RSF has, for seven consecutive years, ranked Eritrea last in its press freedom index. Clea Kahn-Sriber, Head of RSF Africa Desk, underscores the agency’s intolerance against any outside interference with the positions it takes whether the pressure comes from the US or Eritrea. “RSF does not receive any money from the US government to function,” stresses Sriber, adding that RSF has refused funding from donors that “we feel are not neutral or would try to control our positioning.”

RSF uses the same press freedom scale to measure each government’s actions. US grade has, for instance, gone down on the RSF scale between 2013 and 2014.

RSF has particularly been a target of Eritrean government attacks because of its sponsorship and collaboration with the influential Paris based Erena Radio which is widely listened to throughout Eritrea.

Sriber says defending the rights of people to be informed in no way amounts to hating Eritrea. “Radio Erena is accomplishing a mission of public interest, providing needed information to the Eritrean people”.

RSF and CPJ no doubt will want to see an end to Eritrea’s dispute with Ethiopia, which is seen as the government’s justification for its iron grip over every sector of society including the press. Both welcomed the government’s decision early this year to release 6 journalists who had been in jail without trial since 2009.

National security matters are every government’s concern. But Eritrea’s excessive and unhinged measures, especially the quelling of freedom of expression, the imposition of coercive, open-ended military service, have robbed the country of its future leading to the monthly exodus of thousands of its youth.

Media rights groups are committed to exposing and criticizing abuses against journalists everywhere. But whether the government in Asmara thinks these groups are biased against it or not, Eritrea urgently needs free, professional watchdog journalism in building a secure, prosperous and united country.