Ethiopian Prime Minister Hailemariam Desalegn said that Ethiopia is seeking a “win-win” relation with Egypt, saying that his country was seeking good relations with Cairo.

In an exclusive interview with Anadolu Agency, Desalegn said that Egypt’s President Abdel-Fattah al-Sisi is committed to relations between Egypt and Ethiopia. 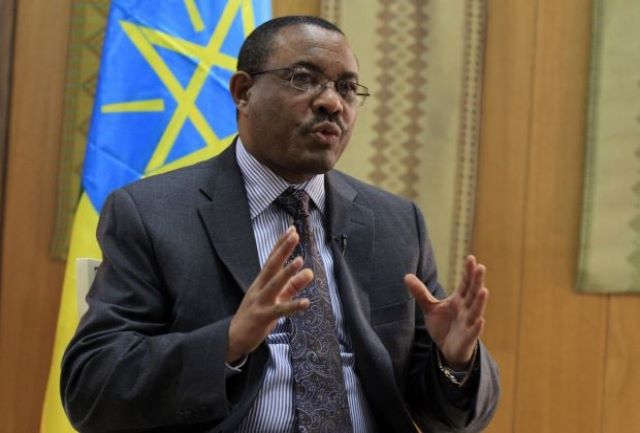 The Ethiopian Premier also addressed several issues during the interview, including the activities of the Somali militant group Al-Shabaab and South Sudan’s peace talks.

FOLLOWING A SUBSET OF THE INTERVIEW THAT DEALS WITH ERITREA:

AA: Ethiopia and Egypt are enjoying diplomatic rapprochement, which climaxed with the Malabo meeting in Equatorial Guinea between you and Egyptian President Abdel-Fattah al-Sisi. How are relations now?

PM: First of all, the relationship between Ethiopia and Egypt is a longstanding relation. We want to continue building on our good relations.

There has been, you know, misbehaving practices in previous regimes, like the Mubarak regime, the Morsi regime. They were, you know, trying to destabilize Ethiopia using rebel groups that are supported and nurtured by Eritrea.

And I think that was a failure. These leaders were wrong, because that harms the good relationship between Ethiopia and Egypt. But they failed. They could not succeed in their will to destabilize Ethiopia through various means.

Any government who tries to destabilize Ethiopia in a proxy, from a distance, they will fail – like Mubarak and Morsi failed.

Currently, in my discussion with al-Sisi, he is committed to relations between Ethiopia and Egypt. I myself am very much committed to having good relations. We have ….to have win win-win from the common resource, the Blue Nile River.

AA: You accuse Eritrea of being the regional black sheep, although Egypt maintains good relations with Eritrea; the Eritrean president recently visited Cairo. What do you say to this?

PM: As far as the relationship between Egypt and Eritrea is concerned, they are two independent countries and they can have a relationship. The only thing we would not allow and feel that should not happen is if Egypt nurtured rebel groups in Eritrea to destabilize the region.

That kind of approach would be futile. As far as countries' relations are concerned, it is up to countries to have relations. For instance… Sudan is a friend to Eritrea and also to Ethiopia. We do not panic when countries have relations with each other.

The thing we do not help useful is supporting to destabilize. This is our principle and we will stick to this principle. Any country that wants to destabilize another country will be by itself a process or an action which is unlawful. We do not support this kind of action and Ethiopia is always ready to have a strong Egypt, even a strong Eritrea, which lives with its neighbors in a peaceful manner…

Because people live, but regimes might go. So our focus is to have friendly, neighborly relations between Eritrea and Ethiopia. The thing is, now the regime led by President Isaias Afwerki is a regime which is destabilizing the region.

Look what is happening now with Djibouti. They are still continuing to destabilize Djibouti. And Djibouti has appealed to regional organizations, the Arab League and many other international bodies. You can see how destabilizing Eritrea has been to the region.

So they are continuing to wreak havoc. Egypt should understand that this [Eritrean] regime is a destabilizing regime.

AA: Eritrea says Ethiopia has been plotting a change of government in Asmara and that your government is collaborating with Djibouti and the U.S. to this end.

PM: This is baseless. As you know, Eritrea has always been supporting terrorist and extremist elements in the region with the aim of destabilizing the region. It is true that Djibouti is a strategic partner and ally of Ethiopia.

AA: Eritrea and Ethiopia are in a no-war, no-peace situation, while Eritrea is also engaged in destabilizing and harassing Djibouti, which is of course a strategic neighbor of Ethiopia.

PM: First of all, we in the region as IGAD [the Intergovernmental Authority for Development, an East African regional bloc] countries, we have appealed to the international community that Eritrea is destabilizing the region, destabilizing Ethiopia, destabilizing Djibouti, working with Al-Shabaab to destabilize Ethiopia through Somalia and destabilizing Somalia by supporting Al-Shabaab…

We have the right to go to the international community, the UNSC, and the UNSC has passed a strong resolution on sanctioning Eritrea.

I think the international community has to understand this regime has not changed its policy of destabilizing the region.

This is what we have done and we will push it forward. Similarly, we, as close friends to Djibouti, Ethiopia is ready to support Djibouti in any way that helps the stabilization of the region.

So I think we are very close to Djibouti, and our relations – economic, political and people-to-people – is strong… we see that we are supporting each other and continue to support. That is very clear.

Read the full interview at worldbulletin.net »