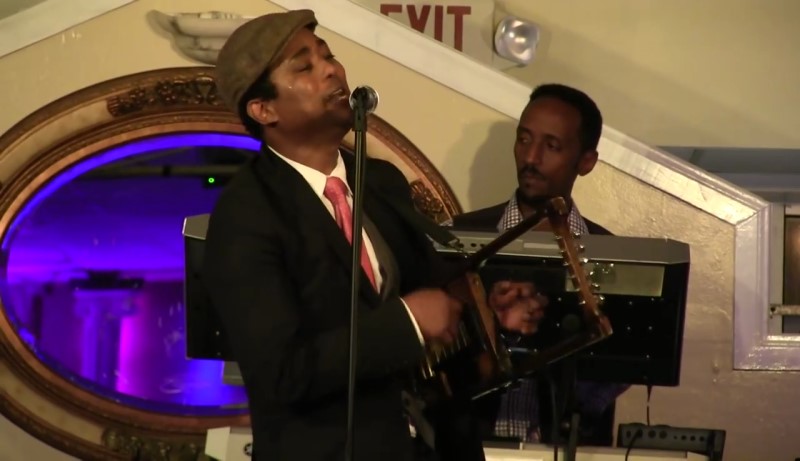 It is not an exaggeration to acknowledge the effects of Yohannes Tikuabo’s music on his listeners as moving and mystical.  Yohannes, aka wedi Tquabo , the celebrated Eritrean vocalist, establishes a special rapport with his listeners via the delivery of his arrangements, raw sound, traditional melodies and poignant lyrics. One can say that his soulful sound gives a sense of emotional wellbeing to the nostalgic and aching hearts of his listeners.

Wedi Tquabo’s music can be described as a reflection of what goes on in his mind as well as in today’s Eritrea. Not only does he juxtapose the two processes well, but he does it with poise, elegance, courage and confidence.  In 2014, at the height of his musical career, he abandoned everything to join the exile community in the US.  His decision was an audacious one; in fact, it is evident that the personal price he paid to accommodate his principled stand was very high. He probably knew he would have to start all over again with his musical career in exile, which is a tough act to pursue.

Wedi Tquabo’s skilful fingers can make his Kirar tell a story without adding lyrics to its sound.  On the other hand, when he adds lyrics to the melodious sound, the composition turns into a mixture of pure joy and ecstasy on one hand and commotion and serenity on the other.  He knows that Eritreans are highly patriotic, and he knows how to extract and express that very gene of their patriotism. Not only does he remind us of the heroic feats of our freedom fighters, how much the living owe to the martyrs, but also our personal and national losses.

His long drawn out wails are very haunting and at the same time pleasing to the soul. His deep guttural sound, roars and sculpted grunts make one’s heart wander in search of that elusive harmony Eritreans are desperately looking for in the depths of their souls. His noticeable immersion into his own music drags the listener deeper and deeper into his world.  His lyrics and composition, on the other hand, could take the absorbed listener into uncharted territory. Watching him on YouTube performing his passionate Hadinetna song is a case in point.

In Hadinetna, he shows that few singers could match his visceral intensity or the depth of his commitment to a song. With his rough-edged vocals, he manages to wring buried emotion out of his listeners. Basically, the emotional range he uses when singing Hadinetna gives his music something special that stands out in the crowd of singers.

Wedi Tquabo has a most unique singing voice that was spotted by members of a Western band that once visited Asmara. They noticed he is gifted with ‘polyphonic overtone singing’ - emitting more than one pitch while actually generating only a single fundamental frequency with his vocal folds. He is believed to be the only vocalist in Africa with such a gift.  He is without a doubt the greatest soulful voice ever to come out of Eritrea.  He is hugely talented, a true star, who loves to go on stage - a stage that we, his fans, failed to provide.  He has the propensity to break into the competitive international music industry. Certainly, he is well predisposed to popularize Eritrean music around the world like no other.  But does he know he is that talented?

We know he is a hugely established artist waiting to be re-discovered.  It is a question of hard work and having a few good friends around him to promote his music. If we do not help him with networking and finding a musical mentor/agent/producer now, then we will lose a great national treasure. Wedi Tquabo is more than a protest singer. He, with talent and that distinctive gravelly voice, can be the voice of today’s generation; not only Eritreans but also Africans.