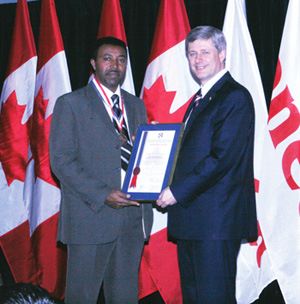 Aaron Berhane, editor-in-chief and publisher of the Eritrean Canadian newspaper - Meftih, is one of the 13 recipients for the award for ‘Best Editorial and Visual Presentation,’ given by the National Ethnic Press and Media Council of Canada (NEPMCC), to outstanding members of this organization of over 400 ethnic media practitioners from all over the country.

The award was formally conferred to Aaron Berhane by Prime Minister of Canada Mr. Stephen Harper during the gala dinner and award ceremony held on Nov. 21, 2009 at Seneca College, in Markham, Ontario. The event was attended by Minister of Immigration and Multicultural Jason Kenny and various government ministers, president, members of the Board of Senators, and faculty of Seneca College, and about 170 participants.
This is the second time in four years that Mr. Berhane has been accorded this prestigious award for “Best Editorial and Visual Presentation”. The first award was conferred to him in 2006.

The official plaque, reads: “Award to Aaron Berhane, ‘Best Editorial and Visual Presentation’ presented in appreciation for his outstanding achievements and distinguished contributions to cultural communities and his community service, and in recognition of his efforts in promoting understanding, the traditions and the interests of the Eritrean Canadian community, his leadership courage and dedication to the promotion of social justice, human rights, the respect of cultural values and equality among all Canadians.”

Of the thirteen recipients, Aaron Berhane is one of only three awardees from Ontario, the others being from British Columbia, Manitoba, Saskatchewan, and Quebec.

The award is especially meaningful to Aaron Berhane, as it caps a significant milestone year for the newspaper he had founded four years ago.

Before Mr. Berhane immigrated to Canada at the end of 2002, he was editor-in-chief and co-founder of Setit -  the first and largest independent newspaper in Eritrea. “Back home, I was punished for the extraordinary work I did with my colleagues to serve the public, but here I am awarded. It’s then you taste the flavour of democracy,” said Mr. Berhane. “This is the victory of all committed contributors of Meftih in particular, and the Eritrean Canadian in general.”

During the award ceremonies, Prime Minister Harper delivered his keynote address before the 170 ethnic journalists and their guests.

“We believe strongly that freedom for Canadians goes hand-in-hand with journalistic freedom,” said the Prime Minister. “Our liberty is strengthened when journalists are free to pursue truth, shine light into dark corners and assist the process of holding governments accountable.”

NEPMCC president Saras also gave a speech, emphasizing the need for government to support the ethnic media so that it could play its important role in Canada’s diverse society:

“Today the ethnic press is no more merely an information disseminating medium but rather a powerful vehicle operating at the grassroots level. In the past, it had taken serious and active interest in fostering Canadian Unity and territorial integrity, and as pro-Canadian, it will pursue this goal vigorously in the future.” Saras said.

“While ethnic media and ethnic communities continue to participate fully in the nation-building processes, it is important to recognize their aspirations, dreams and concerns…the members of the ethnic press of Canada do not look for special status or treatment by the mainstream media, they would feel hurt if they are treated as second class citizens and negligible entity.” He continued.

“Finally, it must be recognized that as long as immigration to this country continues, the importance and influence of the ethnic press will be more pronounced,” Saras said.

Among the guests at the gala event were: federal Ministers Jason Kenney and Peter Kent, Ministers Gerry Philips and Margaret Best of the Ontario Government, Mr. Tim Hudak, leader of the official opposition for Ontario, Mr. Dimitris Azemopoulos, Counsel General of Greece to Toronto, among other members of the diplomatic corps. Also present were the City of Toronto’s Rob Andrusevich, and officials and faculty of Seneca College.