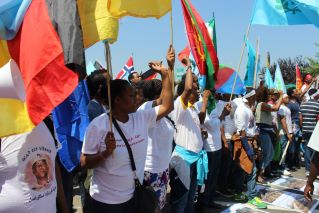 Bologna  - Game changer !
“The moment and the movements has arrived”

Without a doubt, an on going tragedy
Mogadishu, Baghdad, Damascus and Benghazi
factions fully backed by foreign powers
visionless and destructive movements
------

Serving the world’s wicked thugs
trickle down to the ranks,
ministers and high ranking officers
abandoning the regime from all corners

Stated facts, the army defectors
Over half of the exodus
to declare war on the Defense Force
knowing the rank & file has little to lose

The world will recognize your wisdom
when you resist and subdue the system
the moment and the movements has arrived
This regime is weak, desperate and divided

Demand reforms and submit proposals
and conditions to potential investors
don’t shut them off, and no sanctions
when they line up to do their projects