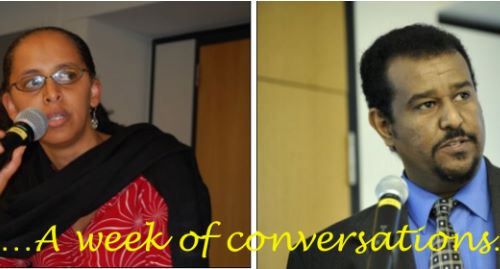 Earlier this week we started a conversation on FB in public about a meeting of Eritreans that took place in Frankfurt over the weekend. The conversation moved from Facebook to SMS and then moved back to Facebook, our inboxes this time… soon we realised it might be interesting to take the conversation back to a more public arena and invite others to join in. So here it is unfiltered….

SELAM: From where I sit the 'agreements' reached following the weekend's dialogues are too vague and mostly un-implementable in our context. What do you really think such gatherings should aspire for in order to realistically achieve?

BOHASHEM: Too vague i disagree. Unimplementable? Yes, simply because:

1.    The seminar communique failed to indicate any action plans,

What about you, what made you think they are "vague" and "Unimplementable"?

The agreement to strive for a peaceful solution, is unimplimentable as it is only a declaration of intentions… one could potentially aspire to do something and never attain it (e.g. pfdj aspires to be just and democratic)…

The agreement to elaborate on a legal framework for the transition process and reestablishment the rule of law is one very interesting agreement, and I hope they will implement this one and very much look forward to reading what is produced. However there is no mechanism built to facilitate the implementation of that agreement.

The next five are what I consider to be things that need to mostly be included in a constitution and hence can’t be implemented hence at best the groups were making a declaration of intent a sort of tentative suggestions for a future constitution… at worst an empty rhetoric that they have no way of implementing in the current context of diaspora movements.

I always laugh at agreements to include more women and youth because when you go to demonstrations… when you have refugee support and advocacy initiatives, you see mostly women and young people… it is not lack of participation in the struggle that should be of concern here… it is the opaque nature of these invitations and the invisible rules that somehow manage to exclude the groups mentioned in the declarations…

The call for the potentially reform-minded forces inside PFDJ and the military to participate in the dialogue on peaceful transition… is something that I am sceptical about… not because I don’t believe in it… because I probably have a different definition of pfdj… pfdj is a matured dictatorial system that has gotten to the current stage having executed, imprisoned and exiled much of its members… therefore I doubt if there is any ‘reform- minded forces’ left to hear the said call. In the army yes there might be people that can be engaged so this one is half implementable however as with the other agreements there is still no implementing body or a strategy for implementation.

As an expert in constitutions (atleast by my standards ) and constitutionalism, now you can tell me about what our role as a diaspora movement is regarding issues that should really be left for a constitution to resolve.

Are we within our role as a diaspora movement when we talk about: official languages, systems of governance, separation of state and religion etc?

BOHASHEM: BTW, thank you for your generous offer of a title that I do not really deserve nor qualify for.

Every matter can be considered a constitutional issue as constitutions are supreme laws of nations used to manage public affairs in a given country.

What we as activists and advocates of political and or human rights need to differentiate is advocacy from representation, promotion from implementation etc. For example, as advocates we can call for the release of political prisoners or the restoration of land or language rights for one group or the other etc. However, we can not claim to represent any segment of our society unless we are either democratically elected to do so or mandated by a traditional authority such as village/tribal councils and chiefs.

In terms of what we can “talk about”, I think the door should remain wide open and un-restrictive. We can and should discuss all matters of concern and even promote our views and vision as long as we understand that the final say on what languages or system of governance Eritrea adopts is left to the Eritrean people to decide on and implement through a legitimate constitution. In other words constitutional matters can be discussed, promoted and researched now and anytime without the need for activists and opposition groups to use them as an excuse for not working together. In fact, it is healthier for all groups to encourage and promote discussions on issues and ideas whether constitutional or non-constitutional. If this exercise is carried out with genuine commitment then it would help our people to make informed decision when the time for that comes up.

Back to you now. Over the last few years so much energy and momentum was wasted. Diaspora opposition spent most of their time and other resources on fighting and conspiring against one another, which left us disorganised and with no tangible influence on the ground. As a psychologist by training, do you have any psychological explanation to the situation of our diaspora opposition?

SELAM: I totally agree with everything being open for discussions… formally and/or informally. There should be nothing that is off limits. Similarly making considered assessments and suggestions, offering guidance and expertise is also something that a diaspora opposition in our position is well placed to offer (albeit tentatively as most of us have been faraway for far too long); however sometimes these discussions generate more questions than answers…. Partly because we don’t have anywhere to take them i.e. we can’t hold referendums or other forms of voting to bring them to a democratic conclusion and so they take up so much space and energy and cause far too many splits and often only ever get used as conversation stoppers rather than facilitators thereof.

As to your question about the insight psychology can offer, I think it is one of the many facets to our context analysis… we ought to understand the impact of our experiences as a nation on our collective psyche and the implications for sub groups within. Let me give you a quick example: one of the biggest challenges we have as opposition is gaining the confidence of eachother, our people at large and then the international community…. We therefore need to understand the psyche of each of these systems, the cultures and sub cultures within each and also the perceptions towards us… we need to use this insight to develop our actions and we need to also use it to implement the plans. Our people feel betrayed by the politics of yesteryears and hence if we are the change to be anticipated our politics should look, sound and feel very different from that of the past.

If you don’t mind I still want to go back to the issue of discussing some matters that could only ever be resolved constitutionally and making them central to our struggle now…. Aren’t political organisations that make such matters central really limiting themselves and doing a great disservice to their constituents as well as to Eritrean politics generally?

BOHASHEM: If we agree that we can all freely advocate for any issue of concern or promote any ideas that we may think best fits Eritrea etc. then the issues we can defer for implementation via a constitutional order can include the following:

Personally I advocate that all the 9 Eritrean languages must be considered of equal constitutional, political and cultural value. I also suggest that English language should be recognized as one of the working languages in the country. This is because since 1941 English has been part of Eritrea’s medium of education in post primary school. It also fits the long term economic and other interest in an increasingly globalized and inter-connected world. While on the language issue, I must also state that pfdj do claim to recognize the equality of all Eritrean languages. However, while their recognition is good, their practices on the ground are the opposite, which tend to promote Tigrigna and Tigrigna only while pushing the rest of our languages to the narrow corners of folklore dance floors. This is not an exaggeration, a simple visit to any Eritrean ministry or public institution can be presented as evidence where no Eritrean languages are used except Tigirigna. Many Eritrean travellers who do not speak or read and write in Tigrigna are made to wait for hours at Asmara airport until someone volunteers to assist them fill in entry forms in Tigrigna.

Articles 69 and 83 of the 1952 constitution (I will double check later) encourage shared governance at the national level and self-rule at the local level. My reference to this beautiful product of Eritrea’s first democracy – the 1952 constitution – should not be understood as suggesting the closure of doors on the need for improvement on issues even if they were once agreed upon. It is just good to start from where our elders stopped and draw lessons from their experience so we can build on the positive side. It would also save us time and resources to do so.

I remember during a seminar in London to commemorate the first anniversary of Jan.21/Forto pro-democracy rebellion, you delivered a highly admired lecture where you drew prompting questions as to why people were losing their social and cultural values of standing up and rejecting wrong and praising right etc. Can you elaborate more on this. This would be the closing part of our dialogue until we meet up again on another encounter.

SELAM: Thanks for the wonderful input including the agreements already reached in 1952... it seems that we are still fighting that same battle.... the ensuing years that followed ie. Annexation of the federation, independence struggle, war of attrition and now pfdj's political violence have simply devastated the social fabric of our society... fragmenting families, breaking up societal structures and values too. The type of evil system that is pfdj can only thrive in such atmospheres where no one can stand up and pay the price for what is good and just. We have a lot of repairing to do and it begins by looking deep with in us evaluating our personal motives and aspirations... the damage to our identity and self perception etc.... only a person that is at peace and secure can form alliances with others that are healthy. The polorisation is our communities may be a result of the continuous damage inflicted on us for decades, but right now they are being exploited by those controlling the 'political system', I am afraid traces of that exploitation is also present in the Resistance movement.... I promise I will say more on that on our next lot of exchanges.

Thank you for this really thought-provoking and honest dialogue Bohashem.