Letter to the International Criminal Court

Esteemed members of the ICC,

The undersigned human and women rights organisations and individual women activists write this letter in order to bring to your attention and raise concerns about the human right situation in Eritrea.

Since its independence in 1991, Eritrea has been governed by notorious dictatorship of damning record of human-rights violation that is playing a major role in the biggest global migration crisis since World War II and unimaginable in scale compared to the size of Eritrea`s population.

For many Eritreans the goal and aspiration for the struggle for independence has been to establish a democratic and rule of law governed state of Eritrea. Therefore, with that purpose 30.000 Eritrean women fought side by side with their male counterpart in mixed unites not only to liberate Eritrea from Ethiopian occupation but also to bring social transformation, including gender equality. In the aftermath of independence, however even the little rights they thought they achieved through blood and sweat was denied. The progress made to advance gender equality during struggle has retarded and even reversed.

The ruling party, People’s Front for Democracy and Justice (PFDJ) is the only party in power since independence; ruling the country without any constitution. The political and social situation is extremely hostile to women. Today, women in Eritrea remain marginalized in social, economic and political life of the nation. A number of legislations have been adopted to formalize gender equality; they are however not enforced in practice. In fact, women are the most affected from the vulnerable groups, with no access to justice.

Customary and religious based laws are applied particularly in family disputes and other vital issues in life in ways that are not in favor of women. Economic hardship and repression, the social and cultural hierarchy deprives Eritrean women from equally accessing land and other resources, and more importantly women have limited control of their lives as human being. In their persuasion for higher education many women and girls face negative attitudes from their families and communities.

Sexual and Gender Based Violence and harmful practices are prevalent and take many forms in Eritrea. Domestic violence is not systematically reported. According to a 2011 State Department human rights report, authorities often respond to rape reports by encouraging the rapist to marry the victim.

Since 1994 where teachers of public Islamic schools in Keren have been unlawfully arrested and made to disappear, group of veterans of the national struggle and in 2001 eleven former high-level officials and leading journalists have been arrested and detained. Some of the senior former female fighters for independence are also languishing in prisons without a due legal process.  They have not been allowed to exercise their right to defend themselves and no family visitation has been allowed. Former guards have reported that many of the political prisoners have died in detention.

In 1994 the dictatorial government of Eritrea, introduced a mandatory national service for all Eritreans, male and female, aged 18 to 40. Initially, this service was intended to last a period of 18 months, six months of military training and 12 months of work on reconstruction and development projects, which in practice is extended arbitrarily and indefinitely. Training conditions are reportedly harsh without inadequate food and water, forced manual labour, which is compared to slavery, arbitrary and severe punishment and sexual assault of women are common as every day practice. The sexual abuse of women and the harsh conditions of life within the national service causes many young women to opt for early marriage resulting in unwanted pregnancy and interruption of their educations.

Victims of rape often face many obstacles in trying to bring the perpetrators to justice. Many women who have suffered rape or other forms of abuse are too intimidated and frustrated by cultural attitudes and state inaction to seek redress. To do so can earn them hostility of from family and the community, with little hope of success. Those who do seek justice are confronted by a system that ignores, denies and even condones violence against women, and protects perpetrators, whether they are state officials or private individuals.

According to the UN Commission of inquiry rape crimes are committed in military training centers, in the army, and in detention by military officials, trainers, as well as detention officials and guards with impunity.

The climate of repression, violence and paranoia that prevails and the indefinite national service, a servitude that never pays more than $2 a day force many Eritreans leave their country in flocks of hundreds every day. According to UNHCR 2000-3000 Eritreans leave the country every month, making Eritrea one of the world’s top producers of refugees. Eritrea also has the highest number of unaccompanied asylum-seeking children with many young girls among them.

¾ Eritreans undertake the world’s deadliest migrant routes, cruising across the Sahara and the Mediterranean to Europe. En route (during their journey) Eritreans face torture, extortion, and rape at the hands of human traffickers and trading criminal rackets.

Refugee camps in Ethiopia, the Sudan, Yemen and Libya offer no physical or legal protection for refugees in general and specifically for vulnerable groups, including ‘women at risk’, unaccompanied minors, victims of sexual and gender-based violence, survivors of torture and people with serious chronic diseases. Many die during the journey across the desert and pregnant women risk suffering complications and giving birth prematurely in the desert.

Since 2016, there have been increasing reports from refugees and migrants of kidnappings that took place in the Sudan, including the kidnapping of girls and women for trafficking and forced prostitution purposes.

Eritrean male refugees interviewed by MSF described how their sisters, friends and mothers were raped in front of their eyes. Eventually they were taken to the border with Libya, where they were sold on to another group of human smugglers or traffickers.

Eritrean women have told MSF in 2016 that they were aware of the high risks, including of sexual violence, prior to undertaking the journey. Many of them stated that, before leaving Khartoum to cross the desert towards Libya, they received injectable contraceptives to prevent unwanted pregnancy in case of rape. They are aware that either they or their friends are likely to be raped or sexually harassed, often multiple times and by multiple perpetrators. Despite all risks expected, they have no choice but to take the risk, rather than staying in Eritrea, Ethiopia or Sudan where they live under extreme harsh living conditions.

The cooperation agreement between EU and the Eritrean government from 2016 assumes that the main driving cause behind Eritrea’s current exodus is economic. Poverty may be a factor, yet the evidence overwhelmingly indicates that Eritreans primarily flee their country to escape mandatory military conscription, forced labour, arbitrary detention, torture, killings, and a general lack of freedom and rights, as has been documented by the UN Commission of Inquiry on Eritrea.

In order to reduce the flow of people, mainly the youth, from Eritrea, the international community and Europe can use their political, diplomatic and financial leverage to bring about change in Asmara. Unless the root cause is dealt with, people will keep taking risks. The necessary pressure should bear on the dictatorial government of Eritrea to stop the indefinite national service, to make life bearable for people and to allow them lead their lives. They have to release all the prisoners of conscience from prison and allow people particularly the youth to exercise their economic right to manage their lives without the need to take huge risks just to lead a life in freedom. Moreover, the international community has yet to realize the ramifications, particularly of the continuing exodus of the youth, on the stability of livelihoods, peace and stability in the medium and longer term in Eritrea.

Unless “tough action” is taken against the regime, the government will continue to act with impunity, and Eritreans will continue making the long trek north, and fishermen and coastguards will continue fishing bodies from European waters.

The UN Commission of Inquiry Report on Eritrea from 2016 suggests that the Eritrean government has committed crimes that amounted to the level of crimes against humanity.

On the occasion of March 8, International Women's Day, we the undersigned Eritrean women call upon the members of ICC to: 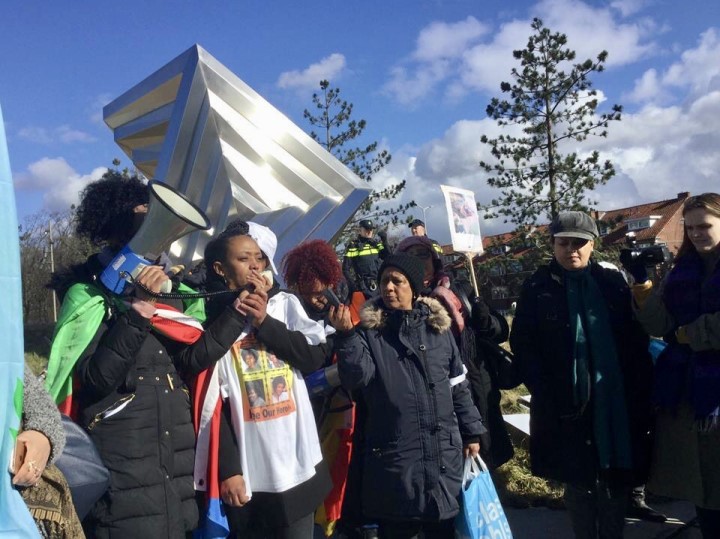