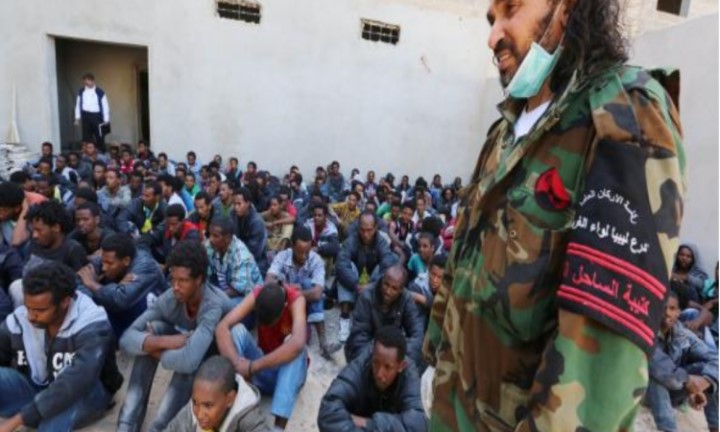 Since the time of Gaddafi in Libya, migrants who make their way to Europe crossing that country have been informing governments and NGOs about the abuses they suffered in desert camps before making their way across the Mediterranean. Since the time of Gaddafi, Europe (primarily Italy) has been making deals with whichever authority was running the country in trying to stop refugees from arriving at its borders. In Egypt, in the Sinai Peninsula, the torture and trade of African migrants (including human organ trade) reached new levels of brutality during that time. With the fall of Gaddafi, and with the new militia groups jostling for power in Libya, it seems the torture and sale of African migrants has found a new place to continue its heinous business.

Things have got worse in the last couple of years as the Libyan authorities and militia found new armaments and funds from Europe thanks to deals being struck in a so-called attempt to stop migration via the Mediterranean.

On 20th November 2017, the UN Secretary-General Mr Antonio Guterres urged for an investigation to bring the perpetrators of the slave trade to justice. The Secretary-General had been shocked, along with the rest of the world, by new footage that the CNN managed to capture within Libya in which it shows a sale of African refugees taking place. Mr Guterres added that it may amount to crimes against humanity, one of the few charges the International Criminal Court prosecutes on.

Human Rights Concern Eritrea (HRCE) supports the call for an investigation into the matter to put a stop to the atrocities happening in Libya, of which slavery is just one. With due approval, HRCE remains wary that the conditions which led to human beings being sold and tortured were created thanks in part to the deals, predominantly under the Khartoum Process, which European governments have made with the authorities in Libya and other African governments. Given the reports and testimonies migrants who arrive in Europe have provided throughout the last few years, European governments had enough information to be in a position where they could reasonably foresee how arming and training Libyan militia would aggravate the abuses that befall migrants going through that North African country.

It is imperative, therefore, that European governments act immediately to stop funding and arming the perpetrators of slave trade, rape and torture in Libya and remove themselves from the position of being accessory to such crimes. Furthermore, whilst the highest possible courts should bring those who commit crimes against humanity to justice, it is also crucial for Europe to rethink its strategy of making deals with governments who show no respect to human rights at all. By helping such governments cause deaths and mass migration out of their countries and thereby funding those who enslave migrants on the other end, Europe is itself showing no regard for human rights or life.

Condemning migrants to stay where they are sadistically tortured and portrayed online for the whole world to see as they are being raped, cut, beaten or stabbed is inhumane. Asking them to return to where they may face further imprisonment and torture is not a real option either. International investigations into crimes such as slavery have notoriously been slow, and bringing the perpetrators to justice takes even longer. European governments, the Libyan authorities, the United Nations and the African Union need to act without delay to remove the conditions which favour the existence and continuation of the atrocities happening in Libya, and provide safe passage to refugees.