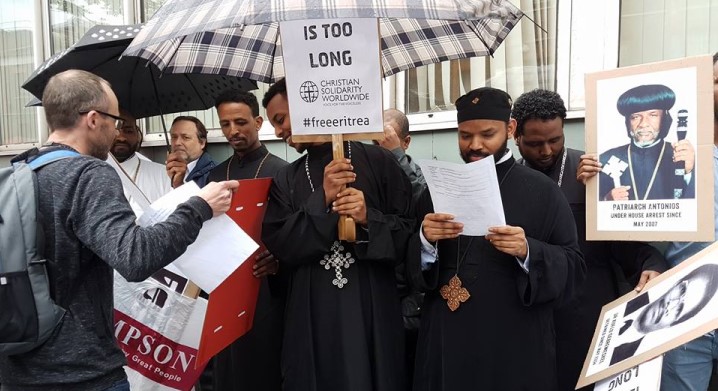 (Asmara 18/07/2017) Release- Eritrea has today renewed its call for prayers and advocacy for His Holiness Abune Antonios Patriarch of the Orthodox Church of Eritrea who was illegally deposed and placed under house arrest over a decade ago.

Sources close to Release Eritrea have today disclosed that they are very skeptical about the events leading up to the appearance of Abune Antonios, Patriarch of the Eritrean Orthodox Church during a mass celebrated at St Mary’s Church in Asmara last Sunday. Although announcements were made stating that the event was a celebration of the successful conclusion of a ‘reconciliation effort’ from within the Orthodox Church, observers were quick to note that following Sunday’s flurry of activities and several visits from many people throughout the day, things are actually back to how they had been, for many years, with the elderly Patriarch still in the same house he had been incarcerated at for over 10 years and under the same conditions.

Over the last couple of months his health has been failing and hence his movements and activities are said to be restricted, however he is alert and continues to pray for the nation and the few people he is in contact with, and has to date totally refuted all the accusations levied against him by the government orchestrated effort to discredit his authority and bring the church under the control of the government.

Making a call for continued prayer and advocacy for his Holiness, Dr Berhane Asmelash director of Release Eritrea stated: ‘it would not be the first time that the government of Eritrea made a great show of ‘releasing’ a prisoner to stave off pressure, without really taking any legal steps to actually free the particular prisoner, the Swedish-Eritrean journalist Dawit Isaac is a case in example here. I, therefore, call for ongoing prayers and advocacy for Abune Antonios, whose solidarity with fellow clergy who have been in prison for over a decade is the cause for his deposition and arrest. His leadership of the Orthodox church and his commitment to his faith and the people of Eritrea has been nothing but exemplary and it is time for all of us to strengthen the call for his release and reinstatement as the head of his church that has suffered as a result of unwarranted interference from the government that is renowned for a totally appalling record on freedom of religious worship’

Release – Eritrea is a UK based human rights charity that focuses on respect for freedom of religion in Eritrea and has advocated, stood in solidarity and supported victims of religious worship since 2004.