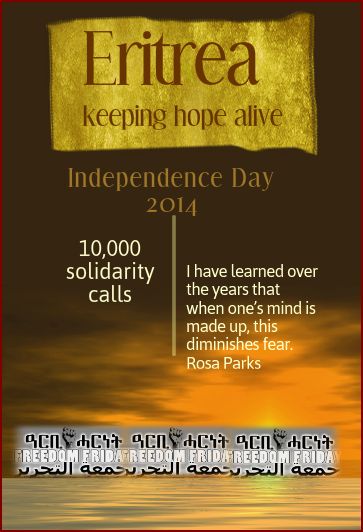 (London 25-05-2014) Automated call service providers used by Freedom Friday Movement stated that the 10,000 calls scheduled to reach Eritrea on the eve of Independence Day Celebrations were blocked after the 2,000 calls went through.

In an unprecedented move the regime blocked  robo-calls calls designed to reach 10,000 homes and businesses with messages of support and solidarity as well as encouraging people to challenge the regime by supporting the calls for change in Eritrea.

Freedom Friday, known locally as Arbi Harnet, is an Eritrean movement aimed at reaching Eritreans inside the country through phone calls, newsletters and messages on posters & stickers.

Inspired by the Arab Spring Revolutions, Eritreans seeking change have been making phone calls to random numbers inside the country asking them to resist the dictatorial regime through various means including emptying the streets on Friday evenings as a sign of outrage against injustice in the country. Since April 2012 the movement has been making tens of thousands of calls on Fridays using automated call services (robo-calls), with messages that made the movement a point of discussion on the streets of towns and cities across the country.

There are various indications of how seriously the regime took these calls, but the most recent one comes from a meeting conducted in Washington DC by Leul Ghebreab, one of the regimes most trusted proponents and head of the National Union of Eritrean Women. During the meeting Mrs Ghebreab listed Arbi Harnet as one of the methods of psychological warfare against Eritrea and specifically mentioned the ‘stay at home Friday’ messages.

Freedom Friday Coordinators stated ‘The robo call service providers have opened an investigation into the blocking and we will be working with them to identify solutions, however this is only a problem in terms of practicalities, calls will carry on, we may need to go back to making one-one-calls to supplement robocalls in the interim, but we are going to carry on reaching out to our people’.

Coordinators of the movement also stated that all their other projects aimed at reaching out to Eritreans inside the country are carrying on as normal; a new edition of their newsletter ‘meqaleh forto’ is nearing completion and activists inside the country post stickers and posters encouraging resistance at every opportunity.