While over 950,000 people are on the move in the northern province of Tigray, a huge humanitarian disaster is already hitting Tigrayans hard. One of the aggravating factors is that the Ethiopian army currently occupying Tigray is trying to prevent people from crossing over to Sudan. Large numbers of people are displaced and end up in make-shift camps without UN support or protection. Moreover, the UN reports several attacks that have caused havoc and destruction in these camps.

Adding to that disaster, the United Nations fears massive community transmission of COVID in Tigray, increased by displacement and the collapse of health services. The UN Office for Coordination of Humanitarian Affairs (OCHA) says that only a small fraction of the needy population (2.3 million out of the total population of 6 million) have accessed emergency support (food, medication, shelter). According to Paulos Tesfagiorgis, “the strategy seems to be to transform the war into mass starvation so that the people of Tigray will either die or become beggars unable to have a meaningful say in their own present and future fate.”

The UN reports that hospitals (outside Tigray’s capital Mekelle) have been looted and destroyed. Humanitarian convoys set up by the UN sit idle and cannot go into the most-affected regions. 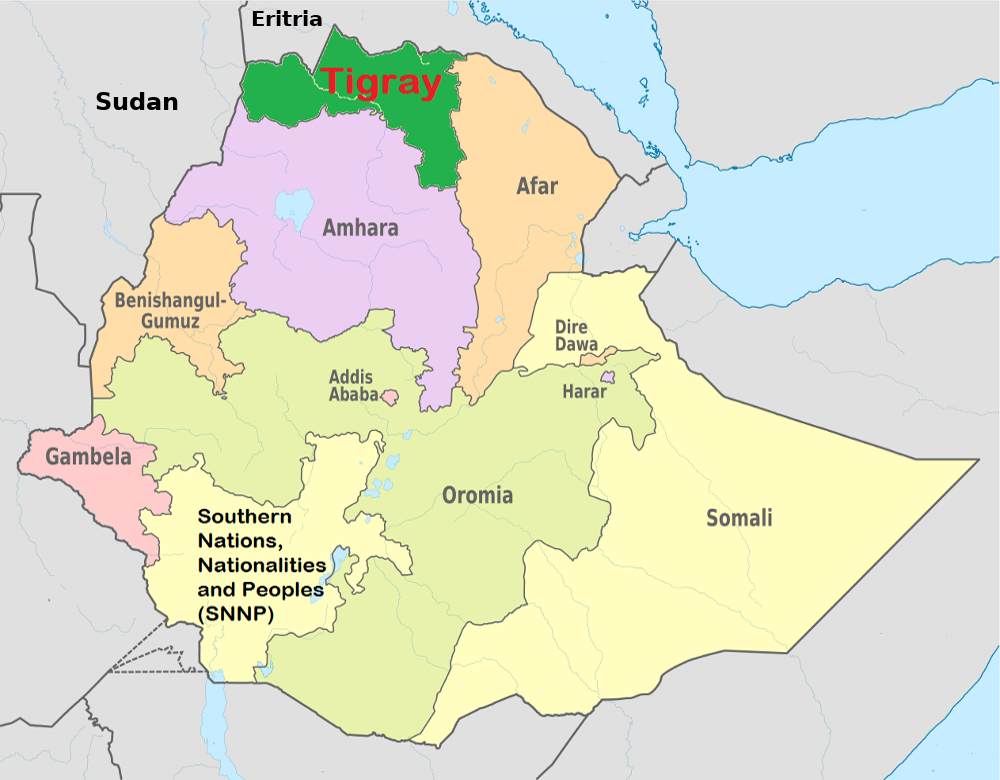 “During the revolutionary war of the 1970s and 80s when Eritrean People’s Liberation Front (EPLF) and the Tigray People’s Liberation Front (TPLF) were fighting Ethiopia, the military regime of the Derg (Provisional Military Government of Ethiopia) was applying the tactic of ‘draining the pond to kill the fish’, which led to hundreds of thousands of civilian casualties.” The Derg napalmed crops, slaughtered domestic animals, bombed villages, even put civilians in churches and killed them. Priests were not spared. This is all recorded. How very painful this is when Eritrean soldiers are participating in inflicting such and repeating the history that had befallen their own people for a long time. But they are young, not connected to the history of glorious sacrifice for truth and ascertaining of the right of self-determination. “Everywhere,” says Tesfagiorgis, “civilians and prisoners are killed randomly.”

The Ethiopian National Defense Force, the Eritrean military, Amhara security forces and militia, and more recently, 2500 Somali fighters brought in from Eritrea, are on the attack against main cities. Several reports indicate widespread Eritrean and Amhara pillaging and looting, including prized cultural and religious artifacts as well as ancient churches and mosques with major historical significance not only for Tigray and Ethiopia but also humankind.

A Reuters report1 explains that the TPLF is battle-hardened with forces of over 250,000 men with significant hardware, human resources. “Fragmented data indicate heavy fighting in several parts of Tigray involving artillery, warplanes and missiles, with a lot of hits-and-run from TPLF whose experience in guerilla warfare is undeniable. In the meantime, conflicts are raging in other parts of Ethiopia. This is the case in the western Benishangul-Gumuz region of Ethiopia, where clashes between Amhara militias and local armed peasants have caused over 200 deaths. Large areas of the vast Oromo province (more than 30% of the population) are unsecured, as armed militias claiming to be part of the Oromo Liberation Front (OLF) are opposing the Ethiopian army.”

“The ruling party (Prosperity Party) created by the Ethiopian PM, Abiy Ahmed, originally based on Oromo nationality, is split between those who prefer to remain with Ethiopia in a more centralized arrangement, despite the heavy costs of the war and those who are sticking to the idea for a decentralized federal republic, promoted by TPLF when they were in power,” says Tesfagiorgis. In Addis and around the ruling group, the new slogan is MEGA “Make Ethiopia Great Again!” According to Ahmed Hassen of International Crisis Group, “the Amhara elites are determined to avenge the humiliation they suffered at the hands of the TPLF and its cronies for the last three decades and take their ‘rightful’ position in Ethiopia’s politics.”2 “At what cost?” asks Paulos.

Another flash point is along the Sudan border area of al-Fashqa, part of Sudan but inhabited by many Ethiopian farmers. Sudan has reacted when Amhara militias came over and conducted armed operations against the local army. This tension probably reflects larger issues of contention between Ethiopia and Sudan (including the construction of the Grand Renaissance Dam on the river Nile in the Benishangul Gumuz Region), which makes Sudan and Egypt nervous about the use of the great river’s water. “An internal power struggle coupled with external pressures from Sudan and Egypt may develop into a wider regional war that urges the country to proclaim another national State of Emergency, leading to the incumbent’s continuation for an unspecified time,” says Ahmed Hassen.

The large presence of the Eritrean army in Tigray was denied until recently by the Ethiopian army, but last week, a top-ranking Ethiopian officer, Major General Belay Seyoum, acknowledged the presence of foreign forces on Ethiopian soil, saying it was ‘painful’ and humiliating to see foreign forces involved in the war. He also referred to the looting by stating that the looted property that is still in Ethiopia can be returned, but not that which left Ethiopia, alluding to Eritrea.

Back in Tigray, the war is causing huge destructions. Civilian former leaders of the Tigray Peoples’ Liberation Front (TPLF) are picked up and coldly assassinated. Such is the case of Seyoum Mesfin, who was arrested by the security unit of the Eritrean army and later killed. Mesfin, 71 years-old, used to head the Ethiopian foreign policy when the TPLF was part of the government in Addis Ababa. One of his colleagues, Asmelash Weldeselassie, a one-handed blind man, was also assassinated. “The claim by the Ethiopian army that he was killed in a shoot-out is ridiculous,” according to Tesfagiorgis. In Mekelle and other towns, the hunt is on to arrest other TPLF leaders who were unable to relocate to the hills when their army moved out to avoid the destruction of the city. These leaders are in their 70s and 80s. The former speaker of the House of Federation, Keria Ibrahim, one of the few female leaders of TPLF, was arrested along with many other civilian officials and administrators who had been managing Ethiopia for over three decades.

At this point, it is impossible to predict anything other than a prolonged and bloody conflict. The TPLF is certainly under stress, with very limited access to the outside world and still without a secure supply line. “There is real danger of escalation.” says Tesfagiorgis. And no indication on the side of the Ethiopian PM of a will to negotiate and find political solutions. As we said earlier, there is no wisdom, no statesmanship. The TPLF is unlikely to engage in negotiation. It is solidly established in Tigray, having won hands-down in a recent well managed and democratic election: “The people are solidly behind them, even more so in front of the destruction and killings inflicted by Ethiopian and Eritrean soldiers.”

The Ethiopian PM is unlikely to lean toward negotiating. “His project resembles the old dream of Haile Selassie and the Derg – to create the grand Ethiopia scheme.” Both sides lacked real statesmanship, and in the case of Ethiopia, “there is the negative influence of the Eritrean President which for its own reasons, want to nourish hate, war and destruction.” Long before the war, “Abiy and Afworki had made detailed military plans to invade Tigray.” The incidents that triggered the war in November were basically an excuse and an opportunity to execute their plan of destruction,” says Tesfagiorgis. In the long run, says Tesfagiorgis, Abiy will have to choose how he will be remembered: as the person who wanted to reform Ethiopia or the one that is the cause of disunity, destruction and destitution of his country and a major cause of instability of the region.

Although external powers are unlikely to intervene in the short run, the USA and the European Union are applying pressure. The new US administration is expected to pay more attention to Ethiopia, freezing some of the aid packages, although they will be called to shoulder the huge humanitarian cost. Tesfagiorgis says, “At first the big powers preferred to sit out and wait to see who the winner will be, which is certainly not going to be the people of Tigray or Ethiopia.” •

Pierre Beaudet is active in international solidarity and social movements in Québec. He teaches international development at the University of Quebec Outaouais campus in Gatineau. He is founder of the Québec NGO Alternatives, and editor of Nouveaux cahiers du socialisme.

Paulos Tesfagiorgis is the former head of the Eritrean Relief Association. He bas been in exile as a dissident from Eritrea.