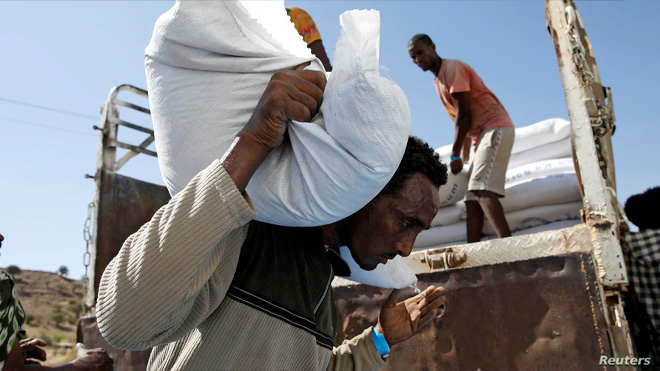 GENEVA - The U.N. refugee agency reports thousands of Eritrean refugees trapped by fighting in Ethiopia’s northern Tigray province are in desperate need of food and other essential supplies and services.

The Ethiopian government has denied humanitarian agencies access to Eritrean refugee camps since it began its military offensive in early November.  After repeated requests, the U.N. refugee agency reports the authorities finally granted the agency a one-time access to two refugee camps, Mai Aini and Adi Harush in northern Tigray.

UNHCR spokesman Babar Balloch says aid workers have found conditions in the camps dire and the Eritreans in desperate need of humanitarian aid.

“Refugees were cut off from any supplies and services for more than two months," Balloch said. "Wells were not functional without fuel for the pumps—leaving refugees to use water from a nearby creek for washing, cooking and drinking, resulting in diarrhea like illnesses.”

Balloch says a one-time food distribution by the World Food Program one month ago is the only assistance the refugees have received for more than two months.  He says plans for a second distribution are underway.

In the meantime, U.N. staff who accessed the camps have distributed food to 25,000 refugees. Balloch says the number of beneficiaries is of concern because there were 50,000 Eritreans in the two camps before the conflict erupted.  So, it is likely many fled in fear of their safety.

“Refugees told our staff that while they were not impacted directly from the fighting, they were threatened and harassed by various armed groups," Balloch said. "The refugees told us they continue to have safety concerns, reporting armed gangs roam the camps at night stealing and looting.”

He says the UNHCR continues to receive reports of significant damage to those camps and of refugees fleeing in search of safety and food.  Of even greater concern, he says, are worrying reports of refugees being abducted and forcibly returned to Eritrea where their lives could be at risk.