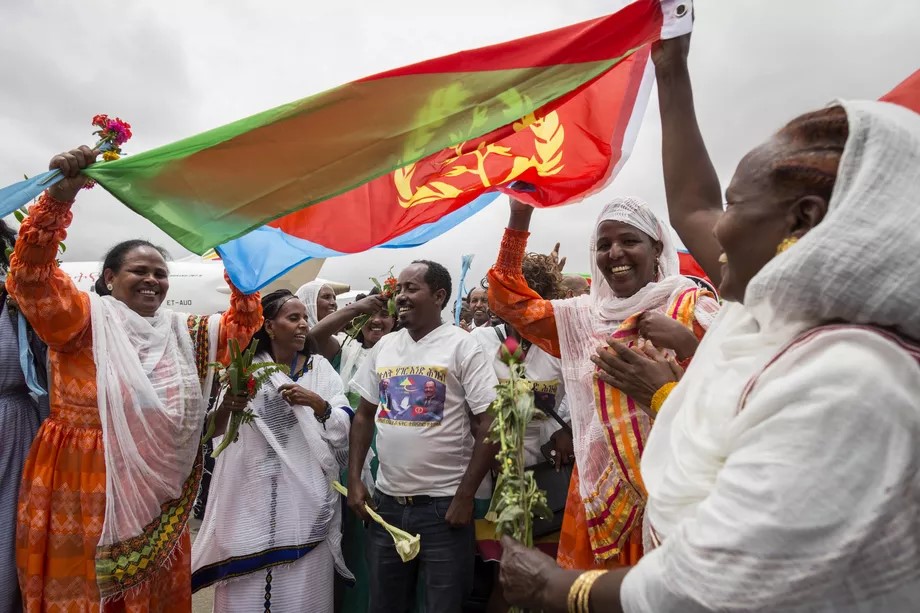 On July 21, Eritrea appointed an ambassador to Ethiopia — the first one in 20 years.

It’s the latest positive step in a series of shocking moves that signal a new peace between the two countries, which have spent the past two decades mired in conflict.

And it’s all happening at a breakneck speed.

Ethiopia’s young new prime minister, Abiy Ahmed, has played the starring role in healing the rift between the neighboring countries. In June, he said Ethiopia would accept a disputed border decision at the root of the current conflict. Then in early July, he traveled to Eritrea’s capital, Asmara, to meet with Eritrean President Isaias Afwerki. The two embraced on the airport tarmac, and later released a joint statement declaring that the war had ended and “a new era of peace and friendship has been opened.”

Ethiopians and Eritreans responded with joy to the news that one of the continent’s longest ongoing conflicts had come to an end. The United Nations hailed the move as a “new wind of hope” in Africa.

The peace agreement is also good news for the region. Omar S. Mahmood, a researcher at the Institute for Security Studies in Addis Ababa, told me that the resolution of the dispute between the two countries “goes a long way to resolving one of the major conflict fault lines within the Horn of Africa.”

What follows is a brief guide to understanding the conflict, the new peace, and what to expect going forward.

Ethiopia and Eritrea were mired in a 20-year conflict. It just ended.

The current conflict between the two Horn of Africa countries has its roots in an earlier war. Ethiopia annexed Eritrea in the 1960s, spurring a protracted 30-year conflict. Eritrea held a referendum in 1993 in which voters overwhelmingly chose independence, and the two countries officially split. It was a friendly separation, by most accounts.

But then things went south.

In May 1998, both countries claimed ownership of a border town called Badme. The town wasn’t particularly important or strategically useful — it had no important resources to speak of — which led some to describe the conflict as “two bald men fighting over a comb.”

Yet the border dispute bred a violent conflict. Between 80,000 and 100,000 people died, and thousands more were displaced. Ethiopia and Eritrea signed a peace agreement in 2000 and established a border commission to resolve the issue.

But in 2002, when the commission awarded the town to Eritrea, Ethiopia balked and demanded further negotiations. Eritrea refused to negotiate unless it was first given Badme. So the two countries remained locked in a stalemate, marked by occasional flare-ups of violence at the border, for two decades.

During this time, Eritrea’s president used the simmering conflict to institute mandatory and indefinite military conscription. He also presided over a government so closed and repressive that the country has been compared to rogue states like North Korea.

“In September 2001, the government closed all independent newspapers and arrested their editors and leading journalists. None were brought to trial,” Human Rights Watch reported. As of 2017, “They remain in solitary detention. There are reliable reports that about half of them had died.”

Individuals suspected of trying to avoid military service are frequently arrested, tortured, and held indefinitely. For years, armed forces stationed at the border had a “shoot to kill” policy, executing people trying to flee the country on the spot.

Despite several attempts to contact Eritrean officials in Washington, no one had responded by publication time. One Eritrean expat I spoke to told me that reason could be fear: Even 6,900 miles away, the threat of punishment by the Eritrean intelligence services for saying the wrong thing looms large.

Over the years, hundreds of thousands of Eritreans have fled to Ethiopia, Europe, and elsewhere, adding to the growing migrant crisis. At the same time, tensions between Ethiopia and Eritrea showed no signs of abating.

Until this June, when everything changed.

While many citizens of Eritrea are afraid to challenge their government, over the border in Ethiopia there has been a groundswell of popular unrest in recent years.

Hundreds of thousands of people have staged mass protests, calling for more political freedom, economic reforms, and a more democratic distribution of power.

The country was ostensibly ruled by a coalition, the Ethio¬pian People’s Revolutionary Democratic Front (EPRDF), but most of the power was concentrated in the hands of a cabal of former liberation fighters, the Tigrayan People’s Liberation Front (TPLF), which controlled the state security forces and represented the interests of a small ethnic minority.

This cabal ruled the country for almost three decades, and many ordinary Ethiopians were unhappy with the high levels of government corruption and repressive laws.

In response to the mass protests and unrest, Prime Minister Hailemariam Desalegn stepped down in February. Abiy, a newcomer from another ethnic group, the Oromo, took the helm in April. At 41, he’s one of the youngest leaders in Africa and has been compared to Nelson Mandela and Barack Obama.

In just a few short months, “Abiy has released thousands of political prisoners, restored access to websites that had been previously blocked, lifted the terrorism listing for several opposition groups, committed to reform of repressive laws and admitted that torture has occurred in the country,” Human Rights Watch’s associate director for Africa, Maria Burnett, told me in an email.

He’s also pushed for peace with neighboring Eritrea. In June, Abiy announced that Ethiopia would honor the border commission’s 2000 decision, and things moved quickly from there. The two countries are in the process of establishing economic ties and developing ports. Ethiopians and Eritreans can now call each other directly, and direct passenger flights have resumed between the two countries.

Eritrea has also announced that it’s withdrawing troops from the border for the first time in decades, though Ethiopia has yet to do the same.

The rhetoric has also massively shifted from words of war to words of affection. “There is no longer a border between Eritrea and Ethiopia because a bridge of love has destroyed it,” Abiy told the New York Times earlier this month.

But not all of this can be chalked up to Abiy, or Eritrea’s President Afwerki, who sent a peace delegation to Ethiopia at the end of June. Other countries like the United Arab Emirates (UAE) and Saudi Arabia have been quietly pushing for a peace deal for some time. The UAE has leased a key port in Eritrea and has clear business interests in seeing trade renewed between the two countries, Bruton said.

The US may have played a role as well; Donald Yamamoto, the Trump administration’s most senior diplomat in Africa, visited both Eritrea and Ethiopia in April, stirring speculation that a peace deal was in the works.

At the end of the day, though, Bruton told me, “this is an African-led peace.” And it’s sure to have an effect on nearby countries in the region.

So what happens now?

In addition to the clear impact on Ethiopians and Eritreans, this fragile peace may also help resolve other conflicts in nearby countries.

When they were at war, both Ethiopia and Eritrea sponsored armed groups to fight each other in proxy wars, some of which took place as far away as Somalia, according to Mahmood, the researcher in Addis Ababa.

Eritrea has border disputes with Sudan and Djibouti as well, but since Ethiopia has good relations with them, there’s now a better chance of smoothing over these grievances. And now that Ethiopia and Eritrea aren’t in direct competition, the overall stability of the Horn of Africa, Mahmood thinks, “should improve.”

It’s unclear how the two countries’ relationships with the US will change now that Abiy is in power and making nice with former adversaries.

The US has long seen Ethiopia as an important partner in the war on terror and supported the country with aid and military assistance. Eritrea, for its part, has often been vilified by the US and isolated by the international community, Bruton told me.

But now that the countries have reconciled, Abiy won’t want to be seen as an American puppet. “We’re going to be in this situation where Eritrea and Ethiopia are now working together, and I think what you’ll see is that American influence is going to be greatly diminished,” Bruton said.

Regardless of all the signs that indicate that the two countries are headed toward a new era, Ethiopia has yet to make good on a key part of the deal: withdrawing its troops from the heavily militarized border.

That’s the next step in the process, and if both countries want to keep up the momentum, analysts say, it has to happen soon.