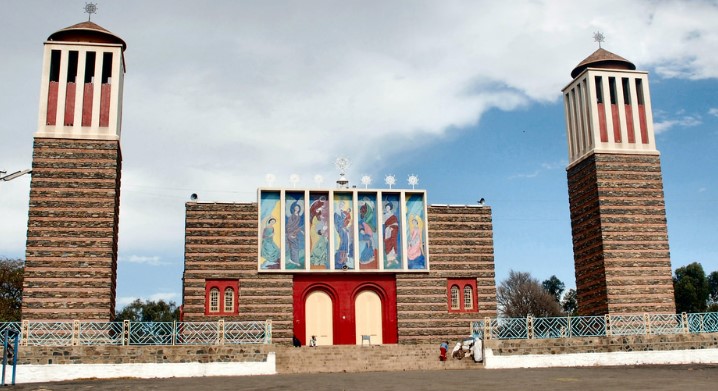 The ‘reconciliation process’ that was said to have culminated last Sunday had been going on for the last six months. During this period members of the Patriarchate and clergy from various parishes and some monks  (including  a certain Father Bereket from the parish of Adi keyih) have been engaged in a reconciliation effort and had infact gotten so far as producing a statement that was distributed widely, including on the internet.

However, according to people close to the process, the effort had also been tainted by the ongoing conspiracy to install a Patriarch who will avail himself to the needs and wishes of PFDJ and the dictator at its helm.

The Patriarch had, during his deposition in 2007, excommunicated Abune Lucas, the priest who has been unofficially leading the Church in recent years, and several other senior clergy.  And this effectively means if the Abune Antonios dies without lifting the excommunication, Abune Lucas can never officially take his position in accordance to canonical law. The ‘reconciliation’ effort is thus believed, by many, to be orchestrated to put pressure on Abune Antonios to lift the excommunication and prepare the grounds for the inauguration of Abune Lucas.

When the excommunication was pronounced Abune Antonios had officiated the pronouncement in accordance to church law and had communicated this to Alexandria and asked for all of this to be  communicated to the public too, this plea was rejected and the Patriarch was deposed and put under arrest. Many years of various attempts later, it is said that the Patriarch was told that the event of Sunday will include public apology as a culmination of the reconciliation effort, however contrary to this the same letter that had been in circulation for many months was read out (by Father Bereket) with no additional provisions and the Patriarch’s request to address the congregation was rejected, as was his request to pray for the gathered.

Following this the priests strongly ordered people to leave the compound and when people were reluctant to leave plain clothed security officers, who had been in the crowd throughout, started pushing people out of the compound and the Patriarch was returned to his place of incarceration.

We believe this is not the end of the matter and the situation is ongoing, we therefore ask every Eritrean to be well informed and actively engaged in this matter