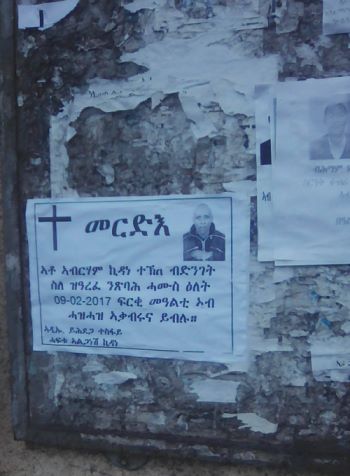 (Asmara 16-02-2016) The irresponsible government policy of arming civilians results in a family disaster in the Aba-Sahawel district in the heart of Asmara.

A former national service recruit, who was demobilised due to illness and then recalled to serve in the militia army murders his brother using the Kalashnikov he was issued recently.

According to Arbi Harnet (Freedom Friday sources) sources in Asmara, Fitsum Kidane is said to be in his early forties and was among the first round national service recruits in 1994. As with all his peers he served his mandatory 18 months but was never demobilised and ended up serving 20 years until he was discharged due to illness in 2014. However he was recently forced to return to military training as part of the militia army.

According to Fitsum’s acquaintances the constant calls for retraining and meaningless patrol duties had a severe detrimental impact on Fitsum’s behaviour of late and many had been noticing that his usual amenable nature was changing and he was becoming stern, argumentative and was often seen in great distress.

On Wednesday 8th of Feb Fitsum returned home from his military training and immediately got into a heated argument with his brother Abraham who was visiting Asmara from Italy. No one knows what the argument was about, but it soon developed into a physical fight and then Fitsum fired the Kalashnikov at his side and fatally injured his brother who later died in hospital. Distraught Fitsum has since reported himself to his local police station.

The family are said to be in great distress and many are reflecting on this incidence that occurred because of the unnecessary and  irresponsible policy of the government, that has led to the proliferation of light arms into the hands of civilians. Observers also say this is but one incidence among many that are said to be occurring across the country.