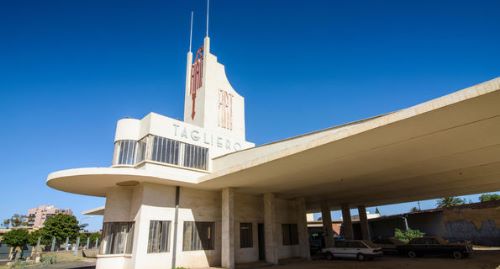 ON A dusty road leading travellers out of the southern outskirts of Asmara stands a small service station. Once owned by AGIP, an Italian petrol company, it was for decades the last place to fill up with fuel between the Eritrean capital and the southern towns of Decemhare and Mendefera, some 40km away. The largest of several similarly designed buildings all over Asmara, it is a modest construction, its mundane commercial purpose only partially belied by the unexpected elegance of the design.

But its design is important. With its rounded form and porthole windows the AGIP service station looks like a submarine—an unambiguously nautical take on the influential Modernist architecture of the interwar years, the period in which it was built. Other service stations across the city are similarly striking. The most famous, a former Fiat station (pictured) on Sematat Avenue built in 1938, is one of Asmara’s most extraordinary buildings, in a city not short of these. Designed by the Italian Futurist Guiseppe Pettazzi in 1938, it too takes inspiration from transport and high-speed motion: the structure in this case clearly mimics the form of an aeroplane. According to Dr Edward Denison, an architectural historian, the Fiat station should be regarded as “one of Africa’s finest examples of futurist architecture.” Its vertical and horizontal lines evoke speed and urgency like few other buildings of the period, anywhere.

This week UNESCO held its annual World Heritage convention in Istanbul. Asmara has been on the organisation’s Tentative List for World Heritage status since 2005 but its official application was submitted this year. The Eritrean delegation, the Asmara Heritage Project (AHP), hopes that Asmara’s application will be approved in 2017, drawing in money, technical assistance and tourism. The problem, however, is that UNESCO bids are lengthy and costly—and Eritrea is one of the smallest, poorest, and most closed countries on the planet. It speaks volumes that sub-Saharan Africa—a place of some 48 countries—has only two more cultural sites than Italy on the World Heritage list.

Nonetheless, the delegation and its cheerleaders are confident. And no wonder, perhaps: for admirers of architectural modernism, Asmara is sirenic. Dreamt into being in just six years—between 1936 and 1941 a sleepy highland colonial outpost was transformed into Africa’s most modern metropolis—it is home to what is perhaps the most concentrated collection of Modernist architecture anywhere in the world. Service stations are only a small part of this picture. The startling coherence of style—a beguiling combination of three principal Italian Modernist offshoots, futurism, rationalism and Novecento—can be found across the city in its cinemas, government offices, suburban streets, hotels and bars. Hundreds of structures share the understated formal simplicity of the AGIP service station; several boast the flamboyance of the Fiat one. Frozen in time through decades of conflict, isolation and under-development, almost all have been perfectly preserved.

There is an ethical ambiguity, though. Unlike elsewhere in urban Africa, where architectural modernism was largely a post-independence phenomenon, modernism in Asmara was an aggressively colonial endeavour. The city was transformed not only for a practical purpose—to be used as a launchpad for the Italian invasion of Ethiopia—but for a propagandistic one, too. Benito Mussolini, Italy’s Fascist dictator, sought an African empire to give his “will to power and domination” material expression. This Nietzschean creed was to be built into Asmara’s streets, and written into its architecture. The Italians constructed a utopian city undergirded by harsh racial segregation laws, erected on the back of forced Eritrean labour.

But while modernism and colonialism sometimes shared a worldview, they tended to come unstuck on reality’s rocks. Colonialism in Africa was largely a shoestring affair, its ambitions hemmed in by the restraining orders of European treasuries and the sensitivities of local populations. What makes Asmara unique is that it is the one place where, briefly, modernism was granted untrammelled licence.

The result, in the end, is an architectural marvel baked in a moral vacuum. Some might wish the city’s authorities demolish this compromised legacy and replace it with something new and untainted. Thankfully, the Eritrean government, for all its brutal authoritarianism, is not so short-sighted. If Asmara’s UNESCO bid is successful, it will be a victory for Eritreans who want to make use of their painful history, rather than erase it.