(Asmara 25-10-2013) Members of  Project Arbi Harnet (Freedom Friday) inside Eritrea have,  this afternoon disclosed that fearing public discontent the Eritrean regime has ordered all Obituary notices of Lampedusa victims be taken off street notice boards in Asmara. 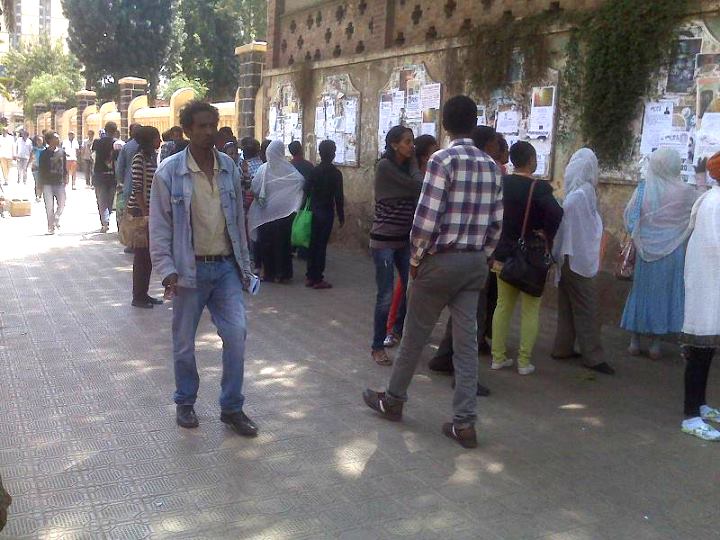 Following the accident on the 3rd of October, off the cost of Lampdusa that claimed the lives of over 350 Eritreans, Asmara residents had put up customary notices with pictures of victims and many people  were gathering to read those notices and expressing their anger at the political and economic predicament that is pushing young Eritreans to take extreme measures to leave their country.

Members of the Project, who sent their report accompanied by a picture taken earlier this week, have disclosed that they had also been busy distributing the underground news paper they launched last September, as well as putting up their posters with urgent messages for people to challenge the political repression in Eritrea.

Alarmed by the number of people flooding the streets to read this notices, the government has also ordered the mass detention of young people found without the necessary permits, however this order has caused real difficulties for the military officials who refusing to implement such orders at a time when people are in mourning and this is said to be causing a rift between government officials. A yet to be confirmed report claims that a high ranking military official, may have been detained or banished for refusing to implement that said order , while another one has been transferred from his duties in Asmara.

Security in Asmara is now said to be, being overseen by soldiers from Ethiopian Opposition Groups based in Eritrea mainly from the Tigray People’s Democratic Front known as Demhit locally.

In line with its objectives to link the Resistance inside Eritrea to the rest of the world, Freedom Friday will monitor the situation closely and announce developments in due course

Please contact This email address is being protected from spambots. You need JavaScript enabled to view it.