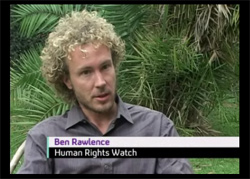 Eritrea has avoided international attention in recent years in ways that may have protected the Red Sea country's rulers from proper scrutiny but benefit no one else. Even those who recall that the continent's youngest state gained its unlikely independence from Ethiopia in 1993 after a bloody thirty-year struggle may be shocked to hear that the optimistic nationalism of the 1990s has been dissolved under President Isaias Afewerki into a despairing void, causing thousands of Eritreans to flee the country that they fought so hard to establish.

Much of the inattention to what is going on in Eritrea is owed to the fact that all independent media were shut down in 2001, at the start of a wave of political repression that continues to this day. Many journalists arrested at the start of the decade remain in prison. Foreign journalists of whom the government disapproves are deported. State-run media broadcast a near-continuous diet of praise of the president and vitriol against Eritrea's nemesis, Ethiopia.

There is no independent civil society, and human-rights organisations are not allowed to operate. Freedom of worship is limited, and movement is restricted. Citizens travelling inside Eritrea need travel permits while those trying to leave the country need visas, which are rarely granted. Mistrust of Ethiopia frames the government of Eritrea's relations with its citizens and its neighbours. In May 1998, a border dispute with Ethiopia gave Isaias Afewerki a justification to shelve plans for elections. The fighting killed tens of thousands on both sides before it ended in December 2000 (see Edward Denison, "Eritrea vs Ethiopia: the shadow of war", 18 January 2006).

A United Nations commission was appointed to demarcate the border between the two countries, but Ethiopia refused to carry out its decision that awarded disputed territory to Eritrea. The government in Asmara, frustrated by the lack of international pressure on Ethiopia, stopped cooperating with a UN border force. The situation remains volatile, even if neither government seems eager to resume direct clashes. The respective governments support the other's opposition movements; Eritrea has also supported extreme Islamist factions in Somalia, Ethiopia's rival to the east.

President Isaias uses the border standoff and paranoid claims of "western interference" to justify his increasingly totalitarian rule. The country's eighteen-month national-service obligation has been indefinitely extended. This means that much of the adult population (in a nation of about 4.4 million people) works at the direction of the state for years for only a token wage. The majority of national-service conscripts serve in the 300,000-member military.

The continuing "emergency" is also used to legitimise sweeping restrictions on political dissent and religion. National-service conscripts who question government policy soon find themselves in Eritrea's massive and mysterious national network of jails. Among those languishing in appalling conditions in Eritrea's prisons - underground, in shipping containers and in the notorious Dahlak Kebir island prison in the Red Sea - are students who were caught reading the bible in school, soldiers who tried to flee the army, and political opponents who in 2001 questioned the president and called for the return of democracy in 2001 (the last category includes the former foreign minister and vice-president).

Human Rights Watch interviewed dozens of refugees in Djibouti, Sicily and London in preparing a new report, Service for Life: State Repression and Indefinite Conscription in Eritrea. Many had been forced to work for the state indefinitely for a pittance, either in the military or in back-breaking jobs in farming, building or mining. All had been jailed at some point for their religious beliefs or for trying to flee, in some cases four or five times.

Indeed, it is no surprise that the repression is causing increasing numbers of Eritreans to flee. Every month, hundreds pour into refugee camps in Sudan and Ethiopia; many of them try to reach Europe, despite the risky journey across Darfur, Libya and the Mediterranean. But leaving Eritrea is not easy. The border is sometimes mined, and patrolled by soldiers with "shoot-to-kill" orders.

Even if they do manage to escape, their nightmare is not over. In recent years Malta, Libya, Sudan, Egypt and even Britain have returned asylum- seekers to Eritrea, where they are viewed as traitors to the nation-building cause and treated as such. They face almost certain incarceration, torture and possibly death. The Human Rights Watch report calls for an absolute prohibition on all forcible return of Eritrean asylum-seekers.

Many of the refugees we interviewed in Italy and Djibouti feared for their safety even outside the country. The Eritrean government has an active network of informants in the region, in Europe and the United States. Overseas embassies are also responsible for fundraising for the government; collecting a 2% tax from expatriates; and intimidating and repressing the family members in Eritrea of those who don't pay.

The threat from this repressive government extends beyond the suffering of Eritrea's people. Eritrea is also a major impediment to security in the Horn of Africa as a whole.

What should be done? Any serious efforts to stabilise the Horn and prevent Eritrea's human-rights crisis from getting any worse should start with the poisonous relationship between Asmara and Addis Ababa. The United Nations, the African Union and key governments should make a serious effort to bring Ethiopia and Eritrea to terms, normalise relations and begin to reduce the network of repression that is choking democracy and human rights in both countries and fuelling instability in Somalia.

Ben Rawlence is a researcher for Human Rights Watch