NAIROBI (Reuters) - Eritrea said on Monday it was tired of accusations that it sends weapons to al Qaeda-linked Islamist militants fighting Somalia's government. 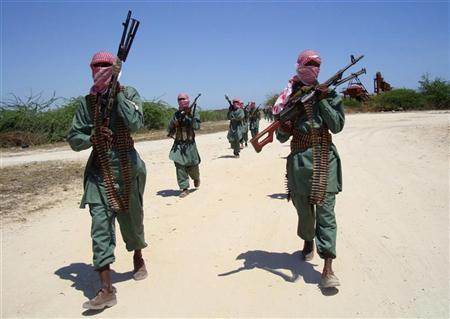 In an accusation backed by some security experts and diplomats, Somalia's government said again this week that Asmara continues to support al Shabaab rebels through planeloads of AK-47s, rocket-propelled grenades and other weapons.

"These accusations are advanced for ulterior motives."

Eritrea accuses western powers of meddling in Somalia and fuelling strife that has killed thousands of people and forced more than 1 million from their homes in the last two years.

Analysts say a long-running regional power struggle between Eritrea and Ethiopia -- who fought a 1998-2000 border war -- has also complicated peace prospects for Somalia.

Somalia's security minister on Sunday called on the international community to help stop Asmara sending arms to al Shabaab, whom Washington put on its list of terrorist groups.

A U.N. panel of experts monitoring an arms embargo on Somalia and other regional observers have consistently labelLed the Red Sea state as a weapons supplier for insurgents.

"Over the last several years it's been continuous support," one regional security expert reiterated on Monday.

The tranquil Eritrean capital has been home to many Somali dissidents since Asmara's arch-foe Ethiopia sent war planes and thousands of soldiers to crush the Islamic Courts Union that controlled the Somali capital and much of the south in 2006.

The United States, which is Addis Ababa's main ally in the Horn of Africa, had threatened under then President George Bush to place Eritrea on its state sponsors of terrorism list.

That infuriated Asmara, who had battled al Qaeda-linked Islamist insurgents in its western, gold-rich area bordering Sudan during the mid-1990s.

Eritrea’s information Ali Abdow, said on Sunday that Eritrea did recognize the existence of the Somali government on Sunday.

Mr. Jangali said it was not good thing to ask “Eritrea’s regime” something about the Somali affairs and called for it to stop its intervention to Somali affairs.

The minister said Somalia has a full support from the International Community and it did not need any recognition from what he called isolated regime.

Eritrea supports the Asmara based wing of the Alliance for the Re-liberation of Somalia which Sheik Hassan Dahir Aweys leads it.

Eritrea and Ethiopia were accused of being playing proxy war in Somalia, but both governments denied the accusations.