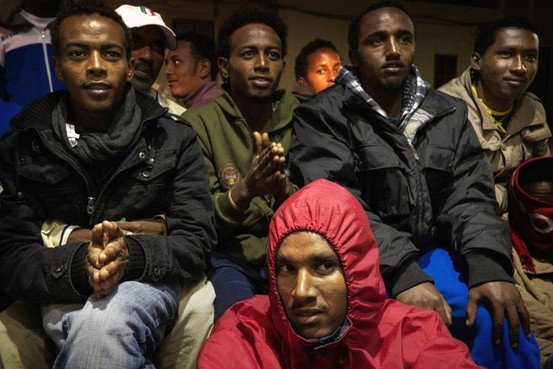 Migrants on the island watch Eritrean movies provided by a local shopkeeper. Massimo Berruti/AgenceVU for the for The Wall Street Journal

LAMPEDUSA, Italy— Mussie Yohannes had been treading water for four hours among the floating corpses of fellow migrants when a fisherman pulled him from the sea on the morning of Oct. 3.

The 26-year-old Eritrean had just become the last person rescued from a shipwreck that claimed 367 lives, some of them children, off this tiny Italian island.

Mr. Yohannes's harrowing journey began months before. He fled his native land and put himself in the hands of a well-oiled smuggling machine that the European Union estimates has ferried more than 37,000 people this year from the Horn of Africa and Syria, through the Sahara, and finally across the Mediterranean in rickety boats—often to Lampedusa.

Along the way, he said he witnessed brutal beatings, torture and rapes of migrants at the hands of their smugglers aiming to squeeze ransom payments from families back home. Such trauma drew him close to fellow travelers.

"I had friends, close friends, people I'd traveled with from Eritrea, who drowned when I survived," he said.

Mr. Yohannes's journey and the Lampedusa shipwreck are emblematic of the perils and profits of a people-smuggling operation stretching across Africa and beyond to Europe. It is an expanding route in the global, $6 billion migrant-smuggling business that is becoming better organized by black marketers, and more lucrative, experts say. The low risks and high profits have left smugglers undeterred by crackdown attempts. 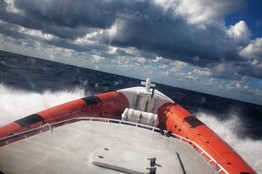 A coast guard vessel patrols the Mediterranean.Massimo Berruti/AgenceVU for the for The Wall Street Journal

On Friday, EU leaders are expected to sign off on a number of new proposals—including beefing up patrols of the Mediterranean and revisiting the idea of allowing refugees to apply for asylum from abroad—in a fresh bid to tackle the problem.

The tale behind the Lampedusa tragedy reflects the enormous difficulty in stopping migrant-smuggling.

Before the Arab Spring, North African leaders such as Moammar Gadhafi kept a lid on the smuggling in exchange for billions in aid from Italy and other European countries. He famously demanded €5 billion ($6.88 billion) in EU aid in 2010 to stop a tide of African migrants who "threaten to turn Europe black." Brussels gave him some of it, and the Libyan dictator duly sealed off his country's ports to migrant-smuggling boats leaving for Europe.

Mr. Gadhafi's fall and the emergence of lawless militias in Libya reopened the passage and laid fertile ground for the criminal bands running the smuggling rings. Meanwhile, brutal army-drafting practices in Eritrea, the rise of al Qaeda-linked terrorist group al-Shabaab in Somalia, and Syria's relentless war are pushing ever more refugees to Europe.

Three times as many migrants have made the dangerous journey as in 2012, says EU border agency Frontex. At least 190,000 migrants arrived in Lampedusa alone between 2001 and 2011, according to the Office of the United Nations High Commissioner for Refugees.Human-rights groups estimate as many as 10% of all boats departing from Libya are lost at sea.

The demand for migrant-smuggling services is so high that at key transit points, such as Agadez in Niger, scores of travel agents provide information about smugglers, while smugglers openly advertise their services in some African refugee camps, according to a new report that Altai Consulting, a firm specializing in migration and security research, conducted for the U.N.

Tribesmen in the Sahara sometimes kidnap migrants, claim ransom from their families abroad, and release them back onto the illegal-migration route once they have received payment, according to the U.N. report and other surveys by migrants-rights groups and judicial authorities.

"The smugglers see the migrants as commodities," says Christopher Horwood, the Nairobi-based coordinator for the Danish Refugee Council's Horn of Africa unit. "They are traded at each stage of the chain."

The experience of Mr. Yohannes, who fled Eritrea to avoid a forced military draft, is typical. His first stop was the Sudanese capital, Khartoum, a hub for migrants looking to get to Europe. At $20,000, a fake European Union visa was out of reach. So he scraped together $5,000 to buy a riskier overland journey and passage to Lampedusa from migrant-smugglers advertising their services on the streets.

The fee got him a ride on a smuggler's pickup truck through the Sahara and to the Libyan capital, Tripoli, where he hid for weeks with hundreds of others at a camp, waiting for the day of his sea crossing to Lampedusa.

There, the smugglers used cattle prods to administer electric shocks to migrants, forcing them to contact relatives at home to pay ransom. All 20 women in Mr. Yohannes's group were repeatedly raped, according to testimonies given to the Italian authorities. He said he wasn't beaten because he kept quiet, staying away from the camp's Libyan guards

The smugglers then put Mr. Yohannes and about 500 others on a rickety boat in Misrata bound for Lampedusa. The group paid, in total, at least $1.6 million for its voyage from the Horn of Africa to get to Europe, according to to statements released to Italian authorities.

The plight of the migrants doesn't end with their journey. Italian authorities are investigating an incident in which migrants in the Lampedusa reception center were stripped naked and sprayed with solution to prevent scabies, sparking a public outcry and criticism from the EU about the conditions migrants face at the Lampedusa camp.

In early November, Italian magistrates arrested a Somali man believed to have helped organize the Oct. 3 passage. But they say they have little hope of going after bigger fish because they lack cooperation in Libya, Sudan or Eritrea. Despite copious information gathered on the smuggling rings in recent years, Italian authorities have managed to arrest just a handful of ringleaders.

"We try to move up the food chain and go to these countries for help based on the information we get here," said Francesco Messineo, the Palermo-based magistrate leading the investigation into the Lampedusa shipwreck. "But we don't expect much."

In an effort to slow the traffic, the EU is training border guards in Libya and signing agreements with Tunisia and Morocco to cooperate in controlling migration. On Friday, EU member-state leaders are expected to sign off on plans to deploy more military vessels to patrol the Mediterranean.For the first time in more than a decade, they will revisit the idea of allowing refugees to apply for asylum from abroad.Officials hope this will dissuade migrants from undertaking perilous journeys to Europe and will sap demand for migrant smugglers.

Some officials say the lack of a stable Libyan government will blunt any efforts to bolster security. And human-rights organizations argue such moves will simply militarize the bloc's borders, keeping desperate people in need of international protection out. Instead, some advocate creating legal channels for migrants to come to Europe to work, even temporarily.

"It would transform the whole trade if it were legalized," says Mr. Horwood. "Taking out some of the smugglers will be absolutely useless. You have so many young and unemployed people who will step into their shoes." The risks of the journey have done little to deter migrants. At least 1,000 more migrants have landed in Lampedusa since the October shipwreck, local authorities say.

Mr. Yohannes says that after the boat capsized, he kept alive by treading water and waiting for help, rather than attempting to swim to shore. After being transferred from Lampedusa to an open refugee camp in Rome, he left Italy in early December for Germany, where he is seeking asylum.

More migrants, he says, will certainly follow him. "People will keep coming, no matter what happens," he says.

—Giada Zampano and Ellen Jervell contributed to this article.