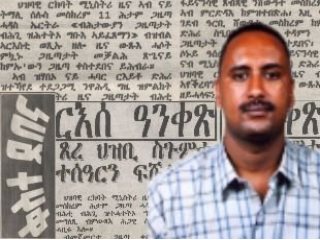 Al-Jazeera’s Jane Dutton on Friday confronted Eritrea’s besieged President Isayas Afwerki with questions which every journalist would love to put to a dictator. Isayas tried in vain to show that he was in control although his poor, hostile performance merely reinforced the notion that the UN sanctions are already having the desired effect.

EXPERTS SAY THAT ERITREAN LEADERS ARE DEEPLY WORRIED BECAUSE UN ALLEGATIONS OF FUELING BLOODSHED IN SOMALIA MAY LEAD TO CHARGES OF WAR CRIMES AND CRIMES AGAINST HUMANITY BEFORE THE INTERNATIONAL CRIMINAL COURT.

In this interview (the last one in our sanctions series), controversial Eritrean journalist Milkias Yohannes vehemently denounces blind support of tyranny in Eritrea. Today (Monday) anti-sanction demonstrations are being held in some western cities in which government supporters are calling on the international community not to punish the Eritrean regime. Milkias’s statements and claims are for mature readers only.

MILKIAS YOHANNES: The insane Eritrean regime has sadly, many nutty followers and worshipers. Some are really crazy and beyond repair. Others are with low intelligence and low political consciousness. Still others are opportunists – and may even include PhD’s - some of whom are even pedophiles who lust for young under age and undernourished girls during their “patriotic visit” to Asmara. I will name some of them in coming days. So the Eritrean political arena is full of such devilish people and is crowded with shameless cowards. As long as their pedophilic covetousness is fulfilled, these cowards don’t care even if the whole nation is going to abyss. They are ready to accept anything. It has been quite a while since they have sold their soul and agree to lick the boots of tyranny. Even a prostitute has more dignity than these cursed creatures.

On why anti-sanction protests are not allowed inside Eritrea

Milkias: The ruling PFDJ rulers are more interested in the dollar and euro earning Eritreans than the poor peasant in the homeland. The PFDJ and its cadres are addicted to robbing Eritreans, and sadly but truly many Eritreans are willing to be robbed, raped and pillaged by this wicked cartel. After they are done duping and stripping foolish Eritreans in the Diaspora, they will arrange some mock style demonstrations in Eritrea. A thief is more interested with someone with money, not with a poor fellow. In the same token, the Mafia cabal of Enda HIGDEF [PFDJ], gives more attention and time to the willing-to-be-robbed group of Eritreans than the masses in the motherland. But, eventually they might allow some kind of protest, but it doesn’t matter to them much, for reasons I explained.

On whether the sanctions ban PFDJ fundraising activities outside Eritrea and who should own the money collected by the regime in the West.

Milkias: Good question. The Eritrean opposition and peace-loving Eritreans all over the world should act on this fast. Eritreans all over the world should start a naming and shaming campaign. There are Eritreans all over the world, who despite getting asylum in western countries, work openly with this condemned terrorist regime. We should start reporting all illegal activities by HIGDEF worshipping Eritreans. We should report to concerned western authorities about these despicable traitors. All illegal and terror activities by different individuals and groups affiliated with PFDJ should be reported to police, intelligence agencies and homeland security or internal security offices. Courageous Eritreans in Holland, Germany and Europe are campaigning and doing commendable work in this regard. There are a lot of Eritreans who live in the west, but are actively supporting the terrorist and barbaric regime in Asmara. There are even some who participated in crimes against humanity. It is time we all report to concerned authorities about any illegal activities by individuals or the Shaebia crowd in the US, Europe or anywhere else.

Almost everyone is working for its interest in this world. There is nothing wrong or bad working for your interest. The international community or the west in particular imposed this sanction on the Asmara regime, not because of gross human rights violations or abuse of rights by the regime. In this time and age terrorism is a more important issue than human rights to many nations, and the Isaias regime fell in to this trap. The international community is doing its job. The question then should be are we Eritreans doing likewise in confronting and tackling this worst tyrannical regime in our history? Are Eritreans of all walks of life and ethnicity doing all they can to get rid of this virus from the motherland and liberate our people from slavery? That is the ardent and timely issue facing this generation of Eritreans. As to the terrorism charges and its validity, the greatest terrorist for me is, one who terrorizes his own people, and in this regard the PFDJ regime is a paramount terrorist organization, way ahead of many fanatic groups.

On the question of whether the regime has conspired to have the sanctions imposed in order to divert public attention away from crimes and brutalities committed at home.

Milkias: It is very difficult to read the mind of this mentally unstable regime. Even seasoned politicians and Eritrean affair observers had a hard time following and explaining the reasons behind many actions and reactions of this bizarre and weird regime. It has full diplomatic relations with Israel, it has signed a pact with Iran and had supported the US invasion of Iraq, and it is an enemy of the US!…….These shows you how odd and creepy the Asmara regime is, so it is almost impossible to correctly guess and reach conclusion behind its actions on this regard. It is a classic example of a system gone insane and out of control. Personally, I believe the president is happy all this is happening, because he gets publicity and those of us who have been following his actions know well how he craves for attention even if it means the total annihilation of the Eritrean people and their aspirations.

On how the opposition should take advantage of the UN sanctions

Milkias: The opposition should take advantage of this once in a life time situation. They should stop acting like first graders in an elementary school and unite their actions. Although there are a lot of encouraging signs lately, they have a long way to go on this regard. They should stop their shameful squabbling and fighting and focus their energy on the big monster in Eritrea and mobilize the masses. As I said, there are more encouraging signs than the usual disappointment, so I, like countless Eritreans, am hopeful to see a vibrant, united and strong opposition bloc both in Eritrea and outside.

On the long list of the regime’s alleged enemies and its beliefs that Ethiopia may be planning to seize the Red Sea port of Assab.

Milkias: The Eritrean regime is stricken by conspiracy theory and wants the Eritrean masses to be like wise. There is a Chinese proverb that says, a mad man likes every one to be mad like him…. The crazy regime has a lot of crazy followers, stricken with conspiracy and fear theory. Almost every one has a secret agenda against Eritrea, according to PFDJ’ political philosophy. The list of enemies of Eritrea, who are plotting to destroy it, is quite long according to Issias. The Ugandans, the British, the Scandinavians, The Saudis, the French, the OAU, the UN, the EU the Ethiopians, the Americans, the Djiboutans, the South Africans……the list is long. So we shouldn’t be amazed of any conspiracy theory by the Issias group.

Despite the PFDJ regime’s panic filled accusations and defamation campaigns against the EPRDF government in Addis, the truth is far different. Unlike the unstable and insane HIGDEF regime, the EPRDF is a regime of laws and constitutions, way more reasonable and honorable than our bestial administration in Eritrea. I have never heard any EPRDF or Ethiopian official talking of taking over the port of Assab. Prime Minster Meles, a very honorable person, has said time and again the positions of his party and government with regard to Assab and its environs. Oddly enough, it is the Issias/Ali Abdu clique that is entertaining Ethiopian groups who openly talk of reclaiming Assab and any Eritrean with sound mind knows what the reality is. Very few Eritreans are duped by Issias nowadays.

On the effectiveness of the targeted UN sanctions which apparently may not affect the millions of US dollars the regime will be amassing from foreign mining investments.

Milkias: It has to be remembered that this sanction is the beginning of the end and not the final act by it self. We have to expect more brazen actions by the desperate regime in coming days. And the international community will not sit idle as the ruling Shaebia mad dogs try to destabilize the region and the world at large. Mark my word; they might even try to send terrorists to Western capitals just to get notice and more out of the ordinary measures by Shabia are on the pipelines. This will hasten the demise of this most hated Issias regime.

On Why the UN has not made public the evidence used to justify the sanctions?

Milkias: There are tons of evidences of subversive actions by the Eritrean government. Ask any Somali official about this and you will get more concrete answer. You may have heard the Somali ambassador to Kenya’s accusation against Eritrea, last week. I myself knew of captured PFDJ propagandists, who were sent to Mogadishu imbedded with the Al Shebab militants. And you have to remember the UN will never pass such crippling sanctions, without evidence or writings on the wall. Even many ruling PFDJ cadres admit their involvement in Somalia. Several terror organizations, including the Somali ones have offices in Asmara and trained openly by Eritrean Captains and colonels. You don’t need the UN’s archive or statement, to know the subversive and terrorist actions by the Asmara regime both in Somalia and the entire Horn of Africa region. Today, the terrorist acts of PFDJ’ Eritrea are known and condemned by countries as far as Gambia, Zambia or Burkina. The PFDJ and its leader are well known and recognized trouble makers in Africa. You have to remember also that the current Somali interim leader and his ministers are the biggest witnesses about the terrorist acts committed by Issias and his generals in Somalia.