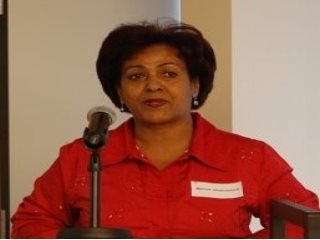 A report out of Russia claims Eritrea is in violation of UN arms embargo on war-torn Sudan where over 200-thousand innocent Darfurians have lost their lives. In the meantime, last minute fundraising projects are underway in the West as such activities may soon be banned under new UN sanctions against Eritrean leaders. Mehret Ghebreyesus is Executive Committee Member of the exiled Eritrean People’s Democratic Party. She has been assessing the scope and the impact the sanctions will have on the Eritrean regime which is being punished by the UN mainly for its alleged support of Al-Qaeda-linked terrorists in Somalia.

MEHRET GHEBREYESUS: To be honest, as much as I care about peace in the region and I do oppose the Eritrean government’s support to self-declared terrorist groups, the atrocities and oppression the government is inflicting on the Eritrean people are of much more concern to me. I wish the basis for the sanctions were the government’s dismal human rights record, denial of freedoms of any form to its own people not to mention its 19 years of absolute dictatorship with no national constitution! Still, I do believe that, over time, the sanctions will have a negative impact on the regime. We live in a global village where all governments have to move from one place to another to conduct their business, exchange ideas and resources. The travel ban of certain individuals and the freezing of their assets abroad will no doubt weaken them. These restrictions will not have any impact on the Eritrean people any more than their own government’s sanctions from which they are already suffering – no trade, restricted travel, no higher education, no decent medical treatment, no freedom of worship, no freedom of expression, no rule of law, etc, etc.

Q: There are some pockets of anti-sanction protests by Diaspora government supporters in some western cities. The regime seems to be behind them. Who are those protesters and isn’t it to too late now for a plea not to implement the sanctions.

MG: It is no secret that Eritreans are deeply patriotic and wish to be actively engaged in its economic, political and social development. Unfortunately, many are having a hard time separating the nation from the government. The government’s propaganda machinery in and outside the country have managed to diminish the difference between nationalism and loyalty to the ruling Party, PFDJ. Some of the people you will see in the demonstrations are those who are stuck in the belief that the whole world especially the American government is against Eritrea. Some self-appointed historians are preaching and brain-washing Eritreans into believing that because the US government is Eritrea’s enemy number one, it wants to rescind its independence. The truth is Eritrea is here to stay and no one can do anything about it without the cooperation of the Eritrean government itself. Some people don’t seem to be asking WHY would all African countries vote unanimously for a fellow member state to be punished unless there was a strong reason for doing so. No one is telling them that the United Stations cannot impose such sanctions unless it was fully convinced of the wrong-doing.

By the way, most don’t know that the punishment is targeted at the few individuals who, against all appeals and warnings would not engage in a dialogue to discuss the issues and instead continued to brag that they will support any one they wish to support. I wish the government had the capacity to sit down and defend its actions in a diplomatic way, but peaceful resolution of conflict whether it is internal or external is not its style. So, I beg: Shouldn’t we be asking for a more responsible and less reckless government first before playing victims of international conspiracy? Eritreans deserve and should demand better governance.

In any case, today the international community, thanks to the numerous independent reports and the hard work of many human-rights activists, political organizations and pro-active website based campaigns is fully aware that most Eritreans are fed-up with the government because almost every household is negatively impacted by its policies and actions. The world knows that most of those who chose to appear like they support the government by attending fund-raising meetings and demonstrations are doing so only due to peer pressure or fear of retribution.

Q: Some allege that the regime indeed needed the sanctions in order to divert public attention away from injustices and atrocities committed at home. Do you agree with such view?

MG: Unfortunately, we are dealing with a regime whose priority is to stay in power for as long as possible. It is also the President’s character to go against the norm and especially against whatever the Western nations stand for. Indeed, Isaias will pursue any external conflict that will pre-occupy the Eritrean people’s mind to the extent that it forces them to put their misery and suffering in the back-burner. Isaias knows that the people’s love for their country has no boundary so all campaigns in and outside the country are carefully designed to instill fear of losing their hard-earned independence.

Q: Are the opposition forces taking advantage of the UN sanctions?

MG: If the question is whether the opposition forces should wage an armed struggle to overthrow the government once it is weakened by the sanctions, the answer is NO. But, I do believe that the peaceful and democratic struggle should be intensified in order to save the people from perpetual poverty and terror. I believe that it is only a matter of time before the government collapses because of its own failed policies and the people’s outrage and demand for justice!!

Q: The Eritrean regime says it is in Somalia in order to weaken Ethiopia which it says might be mulling to take over the Port City of Assab by force. Is that a good enough reason to side with terrorists?

MG: The short answer is NO. In any case, as we all know, the current Ethiopian government, its unlawful deportation of Eritreans from Ethiopia and refusal to demarcate the border notwithstanding, has publicly declared that Assab is Eritrean and Ethiopia has no illusion of wanting to take it over. Even the Ethiopian opposition groups that are being nurtured and supported by the Eritrean government, who in the past had a dream of taking over Assab as part of their sovereign land, seem to have reversed their stand on this issue.

Q: The sanctions are not directed at foreign investors such as Western gold mining companies operating in the country. The regime will probably soon end up making hundreds of millions of US dollars from its mining fields and the money is likely to be used for the purchase of weapons instead of uplifting the lives of Eritreans. What should be done?

MG: Indeed, unless the government changes its destructive behavior, it is only a matter of time before members of the United Nations Security Council take the extra measure to stop any loop-holes the Sanctions may have left. I also don’t expect Nevsun, a Canadian company and the others, to disregard the fact that they are dealing with a rogue government for too long. They have to answer to their shareholders who will ask about the risk associated with partnering with a government that is at odds with its own people and the rest of the world! But the fact also remains that gold will not convert an oppressive government into one that is peaceful and democratic. There needs to be a deliberate will and ideology for a government to be one that is by the people and for the people. Gold that serves the interest of a rogue government will not stop an uprising of the people for their basic rights.