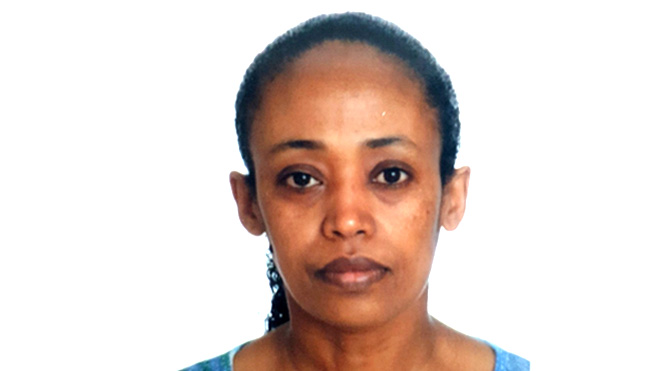 There is an immediate connection one makes with Tsedal Yohannes, the unflinching London-based campaigner, as soon as he/she hears her story.  Tsedal, more often than not, is a quiet, genuine, observant individual who does not shy away from any confrontation if she does not agree with the subject matter. She can be described as a serious activist who is fully committed to her beliefs.

Tsedal has a sister who has been languishing in jail for the last 16 years in Asmara.  ‘In her mind’ says a friend of Tsedal, ‘she literally lives in the same cell where her sister is locked up’.

Tsedal has been campaigning non-stop for the release of her older sister and other prisoners of conscience for a long time.  She is regularly seen in the streets of London, Geneva, Brussels and other parts of the world campaigning for the rights of Eritrean prisoners.

“I do not know how I managed to raise my own three children” she says.  “I have been such a scatterbrain since they took my sister in” she let drop one of her innermost perplexities.

One can sense her bitterness from the few words she utters. “What is the sense in living when a beloved family member is suffering day-in and day-out in a secluded prison cell?” she muses.

“I know I am hung up in this life which is not truly life as we know it”, she adds dejectedly. 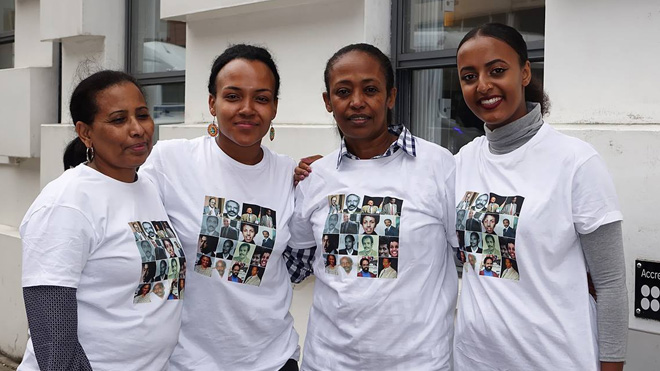 Her words are cold and steadfast. “There is no turning back for me now.  I will finish this life campaigning if I have to before it finishes me off!”  she retorts. 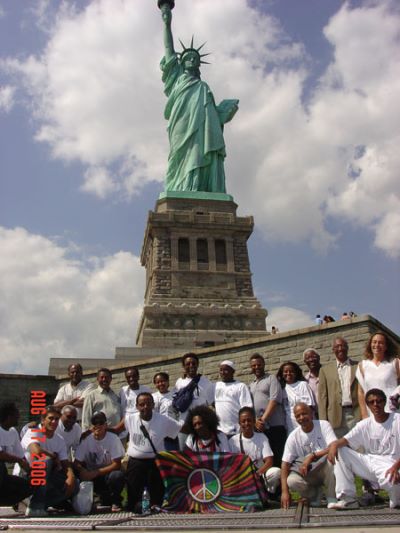 Fellow Eritreans remember Tsedal when she and her friends first embarked on a two-week hike in the US in Aug 2006 - from UN Headquarters in NY to Washington DC - to protest against human rights abuses in Eritrea.

Moreover, Tsedal was one of the first demonstrators to oppose the unfair treatment of Abune Antonios by visiting the Orthodox Churches in London.  Abune Antonios was the third Patriarch of the Eritrean Orthodox Tewahedo Church who was illegally and forcefully deposed by the Eritrean government in 2007. He has been under house arrest ever since.

Here is a brief chat AIM held with Tsedal …

AIM:  Any news of your sister Aster?

Tsedal:  News? What news? Ask me if I can hear Aster singing from her cell! I do; and I sing along with her.

There was anger and acrimony in her scathing answer at the outset.

After she calmed down she switched to a softer language. “At times I would search for info in the internet to learn of experiences of life in prison, you know” she said.

“Serving an indefinite sentence in prison is dreadful … it affects the whole family”, she ponders aloud.  She is right.  Being deprived for years of family, children and friends is no life.  Especially, for prisoners like Aster who never had a day in court and whose ‘wrongdoing’ is not publicly proclaimed is a travesty of justice. 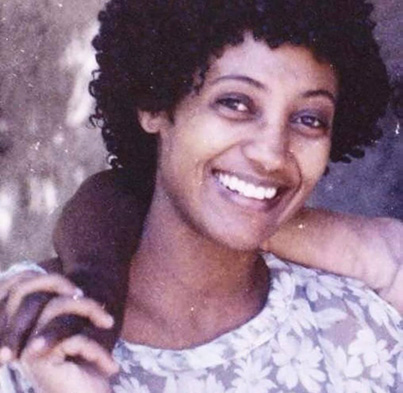 Aster Yohannes, circa 1987 in the battlefields of Eritrea

Aster Yohannes, Tsedal's older sister, is a prisoner of conscience. She has been detained incognito since December 2003.

Aster joined the liberation front in 1979 while she was a 2nd year Electrical Engineering student at Addis Ababa University (AAU).  After independence, she won a scholarship to continue her studies in the US (University of Phoenix). While she was in the US her husband, Petros Solomon, a high level government official and renowned freedom fighter, fell in the hands of the security on trumped-up charges. 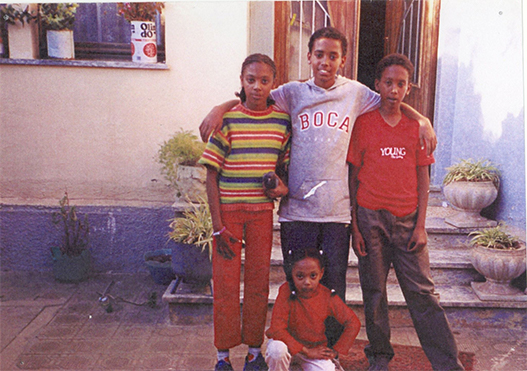 Aster flew back to Asmara to rescue her four children who were left fatherless while she was in Phoenix, Arizona.   Mysteriously, she disappeared upon arrival at Asmara International Airport.

Reverting back to her acrimonious state of mind, “one day she will be exonerated. And those who perpetrated the heinous cruelty on this innocent mother of four will stand before a court of law to face their crimes. That is inevitable!  It is only a question of time. I pray I will live to see the day” she says followed by a long pause.

“I have a deeply held desire to see those responsible for the unjust incarceration of my sister face justice, and be categorised as criminals by a court of law” she said, sounding out of breath.

Tsedal:  I would like to see the future government of Eritrea ensure that criminal acts such as Aster's imprisonment are brought to light and placed on the official record, with evidence, so that such crimes will never be repeated.

Tsedal:  I will not rest until the pfdj-criminals who deliberately contributed to my family's suffering are prosecuted one day.

AIM: Are you talking about revenge?

Tsedal:  Revenge or no revenge, I would like to see the unelected president is made to face his crimes in a court of law.

Eritreans paid a heavy price for nothing. They have been neglected, harassed, persecuted, impoverished, imprisoned, exiled, dispersed …

We had to stop the chat so Tsedal could get a small break.  After a glass of water, we resumed the chat.

Tsedal:  I am fine.  There are good days and bad days; but the good thing is I am still alive. I hope and pray that one day I will walk into the prison cell of my beloved sister and ....

Tsedal: You are tormenting me.  Let’s change the subject.

Tsedal:  Life is tough.  I spend a great deal of time looking at the clock on the wall. I am waiting for that crucial time to arrive … a reunion with my sister. I never knew waiting could be that painful.

I cry very easily, you know. I cry out in my thoughts.  I wonder if people think that I am just crying for the moon.

AIM: Why do you say that? You have stood by your sister for a long time. What you are doing is based on a brave and holy principle. Don’t you agree?

AIM:  Can we talk about the De-PFDJ'isation of Eritrea.

Tsedal:  What do you mean?

AIM: Will the collaborators, PFDJ members, be allowed to live out their lives basically with anonymity and no scrutiny when justice reigns in Eritrea?

Tsedal:  My view is straight forward.  A democratically elected government should handle the 'de-pfdj'isation' of Eritrea.  However, knowing full well how the PFDJ scarred my life, my personal opinion is to create teams of lawyers and investigators and historians at our future Justice Department who will look at the roles thousands of PFDJ ring-leaders and their collaborators played in destroying the country and the spirit of our people.

AIM:  Don't you believe in reconciliation?

Tsedal:  I believe in non-alienation among Eritreans. But I do not believe in cleansing PFDJ's record for reconciliation sake. Our people should learn from the damages Eritrea sustained from the collaboration and complicity of PFDJ members.

AIM: Please describe the nature of the PFDJ once again. Sorry, we should have asked you this question earlier.

Tsedal: To me the PFDJ is like a brutal occupation force that is bleeding the country dry. As this nightmare continues, the PFDJ is depending on the money and resources it is looting through the organs it has created around it. The organs are simple facades … ‘self-reliance’ it claims misleadingly.  The self-reliance ‘policy’ is nothing but a political gimmick.

Tsedal:  I do not want to sound too dramatic; but I am a dreamer.  The dream of our martyrs has not been fulfilled yet.  I still believe in that dream. The dream was supposed to encompass democracy, multiparty elections and basic human rights for all Eritreans; but PFDJ has made the 'dream' a laughing stock of our enemies. I am looking forward to the day when we will all celebrate together a PFDJ'less Eritrea.

AIM: Final question.  Can you please share your thoughts with us regarding our current campaigns?

Campaigns have to do with organising, talking to people who do not agree with us, taking a lot of punches from fellow campaigners, acknowledging our mistakes and moving on.  Campaigners should not dwell on squabbles because squabbling is part of the process.  I am grateful that we all love our Eritrea and we all want to see change.

Allow me to say one thing I feel strongly about before I hang up.  Nowadays I hear campaigners talking about our struggle in conjunction with what is happening in ‘Tigray’, ’Oromo’, ‘Amhara’ … these entities do not mean much to me at this point in time.

Those who are bringing in the ‘Tigray v. Ethiopia’ arguments into our discussion are deliberately throwing a wrench into the works.  So they should stop it. We are Eritreans and our campaigns should remain Eritrean. The rest will come later because democracy is designed to accommodate choices.

Abiy Ahmed consistently DENIED that troops from neighboring Eritrea have not been in the Tigray...

The stories that are coming out of Tigrai are consistently reporting that Eritrean troops,...