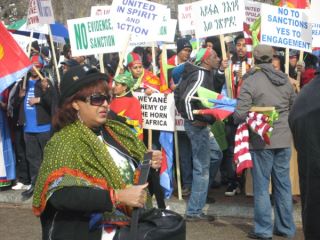 Unconfirmed sources say that Sophia Tesfamariam now has her own office at the embassy located on New Hampshire Avenue, plus a smaller one at ECCC (Eritrean Community Center) on 601 L Street, NW, Washington, DC. This is the same place that the FBI raided a few years ago.

Sophia’s main activity as a media writer has been against Eritrean dissenters and the Ethiopian Regime of Prime Minister Meles Zenawi.

Sophia and the G15

Sophia emerged as a proponent of the Isaias regime in 2001after an open letter by a group now known as G15 the President of Eritrea went public after a disastrous border war with Ethiopia claimed high casualties.

All except three who had at the time were abroad, Ambassador Haile Menkerios, Ambassador Adhanom Gebremariam and Mesfin Hagos, were rounded up on September 26th and have never been heard of since. The 13th signatory, Mohammed Berhan Blata, recanted, stayed with the government and later was allowed to go abroad and settle in Sweden where every now and then contributes articles.

In a pall talk event regarding the “disappeared” 11 Eritreans, she defended the regime’s actions .

On January 4, 2008 in an article which shocked the Eritrean – American Diaspora, she wrote an article targeting Awate’s controversial  webmaster Saleh Gadi (since changed last name to Johar) 19th paragraph, which begins with “In 1977, my source…”

When he sued for defamation, she hired a legal firm and went to a California court where the judge decided that they had no jurisdiction as the plaintiff was residing in Virginia.

She declared victory in the pro Eritrean government website dehai  while the plaintiff’s status on the case became an issue as he did not update his supporters on the cause that was regarded as an offense on free speech and a continuing effort by the Eritrean regime trying to silence dissenters in the Diaspora.

While Sophia ‘celebrated” her victory, she attended a “horn of Africa” meeting in Stockholm where the attendees donated 100.000 Korons for her “legal defense”.

In an interview with a Swedish media, “She was scathing in her criticism against the Swedish involvement. “What is wrong with you Swedish media? Leave us alone, we want to manage our own country by ourselves. Why would you care about Dawit Isaak, one single individual? This campaign will come to nothing", she said to Dagens Nyheter’s journalist Sanna Björling.   She continued by questioning what democracy really was.“Who decides what democracy is? We have our own type of democracy! There is no real opposition anyway, they are all runaway thugs, “Sophia Tesfamariam said to DN. For details visit http://mobil.sr.se/site/index.aspx?artikel=3020115

A few years ago, her sister Helen Tesfamariam in one of the Eritrean regimes various publicly open humanitarian and social events in the Washington DC area, donated more than $10,000 planned for her wedding to an Eritrean “cause”. When this was reported on websites, Awate's co-founder wrote a satirical article whereby she was given “Platinum” award for her service to the ruling party of Eritrea. It was no surprise then to Metro residents when the divorce was processed quietly.

Sophia invariably has inconsistent articles in which she sometimes has formal flows and then slides into insults and brazen name calling. For some observers, these brazen outbursts are deemed to be her own while the formal ones are the Eritrean Regime’s advisors giving her legal and detailed sources from inside the country. Recently she has progressed into interviews and meetings with Ethiopian opposition groups. http://www.ethiopianreview.com/forum/viewtopic.php?f=2&t=14551&p=99189

In the process of her service to the now sanctioned regime, she is given credit for “silencing” writers and commentators whose “demise” in the Internet battles with the Diaspora is seen as propaganda value to Isaias’s abhorrence for free media.

Sophia Tesfamariam, whose father was an employee of the Ethiopian Airlines, is believed to have been born in Ethiopia, grew up in several African countries, before the family settled in the Reston Virginia area. She is married with three children and has a bachelor’s degree. There is also speculation she has been given an upgraded version of Tsehai Habtemariam’s position at the Eritrean Embassy. Tsehai left the office to accompany her husband, Howard University’s Surgeon Dr. Haile Mezghebe to Eritrea. Tsehai Habtemariam’s previous official title was “Political Officer” which callers used to hear upon calling her line.

Eritrea has been under a UN imposed Sanction since December 23, 2009. This Sanction has a travel ban on high ranking officials, arms embargo and condition to freeze assets belonging to individuals or firms related thereof.

Observers in the Diaspora see this “hiring” as preemption to the diplomatic void that could be created if Presidential advisors who speak English such as Yemane Ghebreab and Yemane Gebremeskel are prohibited from traveling abroad. While Sophia is at the forefront of the media blitz by the regime, it is claimed the main enforcers of the regime’s campaign of intimidation and blackmail remain behind. 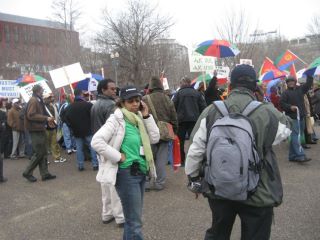 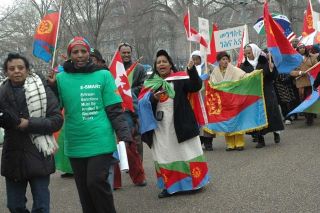