It has been more than a month since Isaias Afwerki, the President of Eritrea, hasn’t been seen in public for more than a month. This is unusual for a man who has made his public appearance on the nation’s mass media almost a daily occurrence.

The last time the President was seen in Eritrean media was in Oct 11, 2013, when he received and held talks with the Council of Ministers of the Desert Locust Control Organization for East Africa (DLCO-EA), when the organization met in Asmara for its 58th regular meeting. 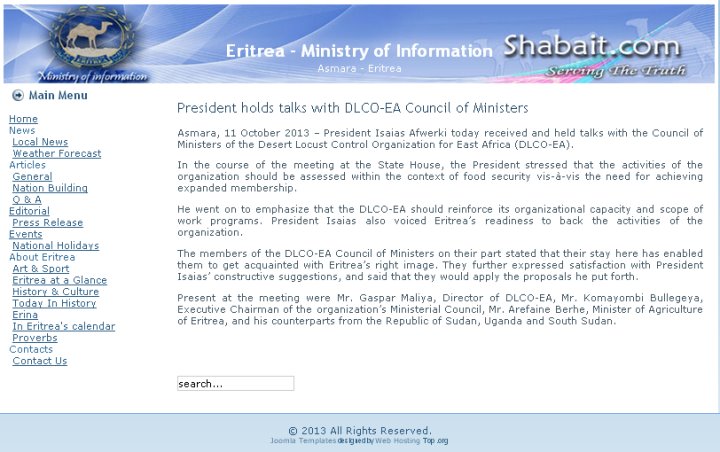 There are rumors that soon thereafter he was flown either to Saudi Arabia or Qatar, where he has been getting further medical attention. And if so, nobody knows whether he has made it back by now to Asmara or he is still there in hospital.

His disappearance from the screen for so long has fueled a lot of speculation in Asmara. The public are openly wondering whether he would be capable of recovering from this latest attack; and if so, whether he would be able to run the nation bed-ridden. Some are even openly talking that, given the severity of his recurrent illness, his death may not be that far. Some officials are also worried about his deteriorating mental instability. All this has further raised the concern over the transition of power, and whether there is a succession plan privy to the military men at the top that the public is not aware of.

It is to be remembered that the President disappeared on Apri 18l 2012 for more than a month, raising the speculation that he was dead. Soon after, he reappeared in EriTv, but with clear tell-tale signs that he was convalescing from his liver illness that had caused his disappearance.