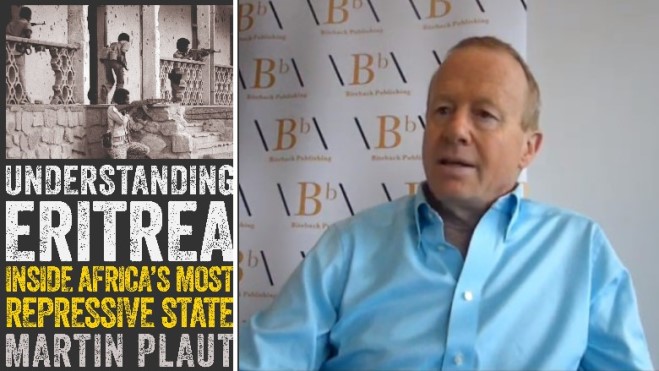 Inside Africa’s most Repressive State

The blurb on the book jacket by Times Literary Supplement reads as follows:

‘[Plaut] is well placed to tell Eritrea’s modern story and does so masterfully … Throughout he condenses disparate material into tight and accessible prose … Plaut’s valuable book has at least ensured that, despite the regime’s best efforts, this country is not fully hidden from view’.

Eritrea is not only the most repressive country in Africa but also one of the most secretive states in the world; dissent is not tolerated and suspicion reigns. What Martin Plaut’s book has done is to lift the veil on the regime’s deceptive handling of its indefensible activities.

Martin Plaut's book, 'Understanding Eritrea', is a timely and crucial read for members of the international community, the young generation of Eritreans and students of African history. The book is divided into eleven chapters that cover the colonial, armed struggle, and post-independence eras that are well intertwined.

The chapters describe how Eritrea came into existence,  how the successfully fought but costly war for independence turned into dictatorship, the thorny relationship it had with its neigbour from the south,  how its proclivity for military adventurism and national service policy led to its isolation and finally, how its domestic politics continue to prompt the flight of its citizens from this supposedly ‘independent’ country.

Plaut uses vivid anecdotes throughout the book to show how the prevalent political culture in the country has brought it to its knees and caused a severe haemorrhaging of its youth. Focusing on the historical transformation of Eritrea, which Plaut has actively followed since the mid-seventies, the book delves into the discussion of how Eritrea betrayed its own citizens.

The book shows how Isaias Afwerki assumed power and how he set about fashioning and modelling government bodies and institutions as he saw fit.  At first, the mood in Eritrea was jubilant after three decades of war and people joined together in heralding the birth of a new nation.  It did not take long for genuine feeling of optimism to simply be a passing phase.  All the effort in seeing Eritreans actively engaged in constitution writing process was all in vain.

The “From Freedom to Dictatorship” chapter clearly depicts the PFDJ’s mentality was never fully divorced from that of its predecessor, the EPLF.  At the core, the regime is still the same organisation, with the same controlling tendencies and figures and consequently of the same mentality.

The chapter on the economy of Eritrea contains revealing accounts the reader would find most interesting.  Plaut explains how Eritrea’s party-controlled economy sways between the overt and covert economies – a feature the international community is not privy to.

Plaut knows about the 1998-2000 war between Eritrea and Ethiopia to a considerable extent.  His account shows the Eritrea-Ethiopian war created an increasingly authoritarian system where opposition and civil liberties were repressed, stunted economic growth at a time when the economy was just picking up and contributed to the militarisation of society.

The last chapters are gruesome.  Plaut delves into the plight of Eritrean conscripts who are subjected to ‘National Service’ which enslaves them for years.  “The Flight from Eritrea” chapter is the saddest commentary on the current situation of the youth.  He does a good job in explaining why so many young people are risking their lives to flee from Eritrea.

Chapter 9 is about life in exile.  It explains how much, during the early days, members of the diaspora sacrificed to support the armed struggle. It then proceeds to give details on how and why Eritreans opted to remain in exile after the liberation of the country.  In fact, it goes on to explain why Eritreans are still opting to go into exile in this day and age.  Unfortunately, Eritrea has turned out to be one of the top refugee producing countries.

Plaut did not only give an account on life in exile, but he also dealt with the various constellations of opposition groups both inside and outside the country.  The book presents evidence collected from former government officials on how the layered internal security apparatus around the president functions.  Moreover, he explains how the Operation Forto played out in 2013 to show how porous the security system is in the country.

Lastly, the account addresses how the opposition groups in diaspora are structured.  He mentions their strengths as well as their weaknesses, the uncoordinated operations they conduct in their communities, and the internal squabbles that paralyse their movements, and ‘how old rifts stand in the way of wider unity’.

‘The Outlook for Eritrea’ chapter highlights what is standing in the way of the country achieving the democracy it deserves.  And as far as the opposition is concerned, Plautwrites: ‘all the opposition groups can do is to maintain their attempts to forge a more effective unity, minimize differences and provide an alternative to the current regime’. The book is an important addition to the body of work on Eritrea and a great resource tool to those unfamiliar with the country’s history. Undoubtedly, the EPLF's legacy, which is intertwined with the President's misrule in post-independence Eritrea, will be the subject of future books. What Plaut has done is to supplement the core set of works that will be heavily referenced by researchers focusing on the predatory nature of the government.  More books like ‘Understanding Eritrea’ are sorely needed to complete the understanding of the fascinating but tragic history of Eritrea.

Martin Plaut, the BBC World Service’s former Africa Editor, has published extensively on African affairs. An advisor to the Foreign Office and the US State Department, he is Senior Researcher at the Institute of Commonwealth Studies.