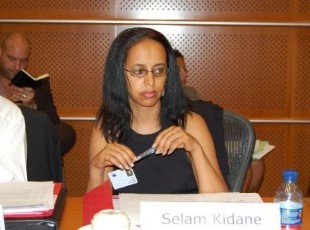 Q:   Violations of human rights and shortages of food often come up in Diaspora and some international debates as the main characteristics that define the state of affairs in Eritrea...Don’t they?

A: They do, don´t they? Well I think they are two separate sets of challenges faced by Eritreans. While they inevitably feed into each other, they do not necessarily share the same root cause, not all the time anyway. Failure of rain and the global economic meltdown have inevitably had a lot to do with the shortage of food being experienced in Eritrea today. However, the tragedy is this is compounded by much mismanagement and bad governance including lack of human rights. I say the people of Eritrea have become victims of both food shortages and human rights abuses. It is now becoming difficult to envisage a way out of this poverty when the human rights abuse means that Eritreans resort to fleeing the country rather than develop it, hence inextricably linking the two.

Q: Assuming there is to begin an open dialogue between the Eritrean people and the government, say, next week. What, in your view, should be the main topic for debate?

A: That is a big IF, but if it did happen, I think the only item on the agenda should be a long hard assessment of where Eritrea is today, when one has to buy extra bread for their children in the black market and when fifteen year olds are killed across fields where they should be playing football. It is time for Eritreans to assess our position and allot responsibility where we should lie.

Q:  But for the government there seems to be no ifs or buts and the issues you mention are muted. The government says it is interested in protecting the country’s independence and sovereignty and in building the economy. There can be no disagreement over that. But do you think these government goals are achievable in a system devoid of participatory democracy... where respect for human rights and justice is lacking?

A: Well, it has been possible in Eritrea thus far; the question should be is it sustainable? The refugee camps of Sudan and Ethiopia, the Sahara desert and the Mediterranean bare tragic testimonies to what desperate young Eritreans resort to when they are denied their rights. People need hope. I believe the best way to make people defend their country and build its economy is by making them stakeholders, and that requires meaningful participation based on respect for the person as human and their rights as such.

Q:  What should be the priorities of the civic and political opposition?

A:  Being the voice for the voiceless, assessing, reassessing and rereassessing where we have gone wrong as a nation and working to restore the stakeholdership of Eritreans in all matters Eritrean - and in that strict order if I may add.

Q: And how should the opposition forces campaign to achieve their goals?

A: I keep coming back to this notion of a long hard look at oneself, ideologies, strategies, objectives and structures. One thing is for sure there is a huge disparity between what was promised to all Eritreans and where we are actually at today. I do not see enough acknowledgement of the shared responsibility of the entire class of Eritrea´s political echelon. It is easy to blame the government (and blamed it should be, for much of what has occurred in the country) but the political organisations opposed to the government also need to look at their inner workings to see if they really are fit to lead and ensure that they remove ALL barriers preventing them from being a viable solution.

Q: You have been one of the most outspoken and most courageous detractors of the existing Eritrean system of government. How is it like to be in that position?

A: I don´t think I have done anything extraordinary ...not yet anyway... I simply joined others and included my voice to be the voice for the countless voiceless, it is a privilege to have the opportunity to be part of something noble.

A: To me national unity comes from stakeholdership; if people have equal stake in the notion that they will be united to protect that mutual benefit. Unity is not endowed, it is arrived at through commitment to create a nation that is for all and by all, and you can´t have that without peace and democracy. I wouldn´t be here if I didn´t believe a peaceful, democratic Eritrea is achievable and worth fighting for.