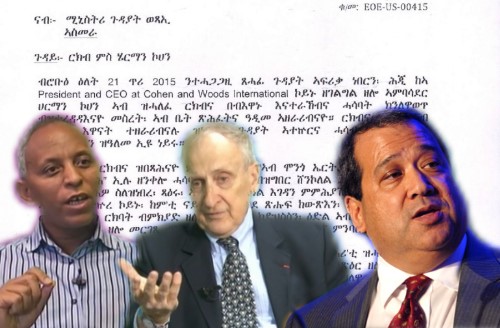 Asmarino Independent  presents the English translation of the letter forwarded by Eritrean Embassy to the Foreign Minister of Eritrea concerning the DC Embassy ongoing conversation with Mr. Herman Cohen on how to manipulate perceived "difference" between the State Department and the office of the Presidency.

Beyond giving us an insight into the thinking and working process of the Eritrean regime as represented by its Embassy in Washington DC it offers us a window into the regimes strategy to induce a difference between US and EU and between the branches of the US government in a desperate maneuvering to remove the UNSC imposed sanctions.

As usual, the use and throw regime, has accessed Mr. Cohen to do their bidding. How long this relationship will last is anyone’s guess. But the connection is in line with the usual PFDJ subterfuge approach. The issue is not about the Eritrean regime’s approach but about the bewildering behavior of a seasoned diplomat going to bed with the most repugnant totalitarian in Africa.

Here are the critical questions that flow from this document:

We in the Eritrean Diaspora have the duty of methodologically following up the detail facts about the intervention to illegally influence the US foreign policy on behalf of a brutal tyrant.  We must expose this machination.  The voice of the people of Eritrea suffering under the brutality of PFDJ regime has to be represented.

We ask you to help us circulate this translation widely. Please forward it to your local representative, newspapers, human right organizations etc.

We will keep you posted on any development pertinent to this issue.

Below is the English translation of the original memo written in Tigrigna.

EMBASSY OF THE STATE OF ERITREA, WASHINTON DC, USA

Re:         Communications with Herman Cohen

Following our on-going exchange of ideas and understanding, I invited Herman Cohen, former Assistant Secretary of US Affairs for Africa and now President and CEO at Cohen and Woods International, on the 21st of January 2015.  The purpose of our meeting was to follow up and focus on issues we previously discussed.

It is recalled, he had raised the issue of resolving tensions between Eritrea and Ethiopia in our past meeting.  He agreed with the conclusion we had reached that there will not be any resolution due to the endless discussions with the Weyane.  We had an agreement that his efforts would therefore shift to raising issues on sanctions and improving relations between Eritrea and the USA, produce a report and explore the position of US Foreign Affairs and, whenever possible, work further on ways to influence US policy in favour of Eritrea.

I appreciated the on-going interest and efforts he has shown.  After updating him on the initiatives taken and the real challenges Eritrea has been engaged in and the urgent matters of diplomatic relations with neighbouring and other countries, I asked him about recent developments on the issues we discussed before and those he was working on since our last meeting and, if there are any outcomes from his communications with US Foreign Affairs.

Ambassador Cohen said that he has been working on those matters, on the lifting of sanctions and improving relations between Eritrea and the USA.  In the area where Eritrea was accused, the final report of the Control Committee of the UN Security Council declares that Eritrea is free from any wrong-doing and, based on this outcome and after studying the wish of several members of the Security Council, to have the sanctions lifted and the US being one of the influential powers that should play a vital role towards that end, he shared his views and observations with various members of staff of the Office of African Affairs.

In his meeting with Principal Deputy Assistant Security of State for African Affairs Ambassador Donald Teitelbaum and Nancy Cohen, Director of East Africa, and in view of current conditions in East Africa and the Middle East, it is in US national interest to improve relations with Eritrea and Eritrea’s stability in the region could be of advantage to US security in the fight against terrorism.  He further discussed the issue that, in its potential to play a role in this endeavour, Eritrea’s soured relationship with the US could be normalised and those countries that are friendly to the USA but are being forced take a stand against lifting of sanctions, could be persuaded to support and change their stance in favour of Eritrea.

He also reported that in relation to what Ambassador Donald Teitelbaum who openly expressed his thoughts, and his assistant Nancy Cohen have said that according to an assessment and position on the question of improving relations between two countries, it is in his area of interest and of the department of Foreign Affairs; that it can play a role in raising the issue of lifting of sanctions and that they have submitted their conclusion to the US Government to support the idea of normalising relations with Eritrea.  However, according to the White House ‘Eritrea is not ready to improve its relations and work with the USA and instructions are still in place to block any motions to lift sanctions.’

Herman Cohen further asked Ambassador Donald Teitelbaum and Nancy Cohen if there are ways by which relations with Eritrea could be returned to normal.  They said that since normalising relations with Eritrea is of great interest to the US, they will work towards that end.  In order to cross the strong opposition posed by the White House, it would have been helpful for Eritrea to show Cuba-like gesture since it would soften that opposition.  Moreover, another helpful gesture would be to release from prison the two US embassy staff and, in relation to improving and upgrading diplomatic relations and exchanging ambassadors, it would be more favourable if Eritrea could take initiatives.  The position of the department of Foreign Affairs would be in a better position to influence and strengthen the US Representative’s (Susan Rice) stand in the Security Council.

It would be good, Herman Cohen said that these communications be sent to the Government of Eritrea.

Herman Cohen was expressing his overall assessment and pointing out the stark difference between the positions of Foreign Affairs department and the White House on the issue of lifting sanctions and improving relations with Eritrea when I interrupted him to what extent and how supportive was the position of Foreign Affairs.

He said that for geo-political reasons and referring to ever evolving and disturbing developments in Yemen, Ethiopia, Sudan and Somalia; there is a clear understanding within the department that working with Eritrea would be of interest to US policy and that this a view that is also shared with the Department of Defence (Pentagon).  However, he added, the unfavourable position of the White House is influenced by Susan Rice and her followers.  She thinks she is an expert on African affairs.  Her job, instead of focusing on diplomatic matters, tends to revolve around injustices and she makes decisions on what she likes or dislikes; and because she tends to be guided by personal grievances, he was of the opinion that one would not find her suitable for diplomatic responsibilities.

Moreover, concerning the lifting of sanctions and based on conversations he had with his close acquaintance, the current French Ambassador in Washington DC, who was a Permanent Representative in New York, he [Herman Cohen] has learned that even France and Great Britain would have liked lifting of sanctions and that there is a feeling of discomfort with those who support the continuation and nursing of these sanctions; and since the US is holding a strong position while Eritrea has been unable to work much harder on improving its relations with Washington, it has complicated the issue further and is more difficult to resolve without the support of the US Government and that of the White House in particular.

In conclusion, Herman Cohen raised the issue on the attempts made to end tensions between Eritrea and Ethiopia, the low priority and expectation that it was given and the limited assessment he made.  His sources from Addis Ababa have informed him that there are EPRDF members who are interested to resolve the tensions between Ethiopia and Eritrea but that there also those, although few in number but with higher influence, who are blocking initiatives to end the tensions by holding the position that the Government of Eritrea will collapse of its own accord and there is no need, at this stage, to engage in matters of withdrawing the army and demarcate the border.

From my side, I presented a summary with the following key points:

Finally, we agreed we will continue with our on-going correspondences, share information and renew our efforts.  Moreover, on the occasion of the 35th anniversary of the National Union of Eritrean Women, I invited him and his wife to join us on our regional symposium on the 7th of March 2015.  It is a day of great celebration that is being prepared and organised in Washington DC and especially oriented for foreign participants.  It is about the role of women in Eritrea in the struggle and development.  He has accepted the invitation.

VICTORY TO THE MASSES!!
Stamped and Signed

email: This email address is being protected from spambots. You need JavaScript enabled to view it.