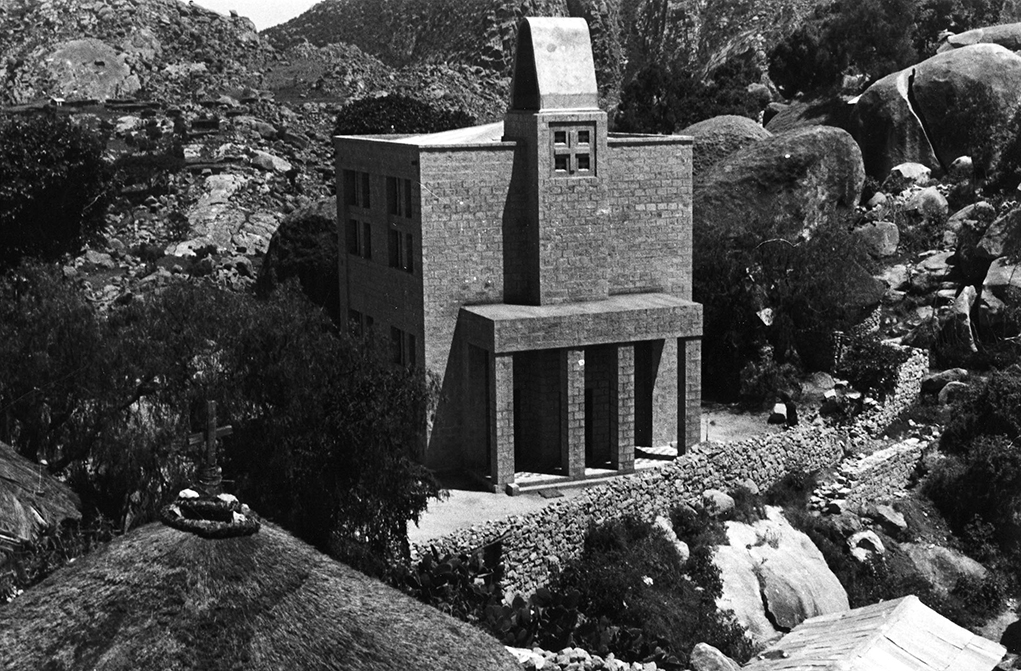 St. Mary of Debre Sina: The Unseen “Lalibela” in Eritrea

Ethiopians and Eritreans are one people, said in Amharic the foreign minister and the president of the State of Eritrea to the Ethiopian people during their visit of Addis Ababa, in July, 2018. Isaias was feted as a hero and received traditional Ethiopian warrior outfits and a live camel: the emblem of his state. He also attended with fanfare the opening of the old Eritrean embassy. The irony is that these figures, who are the elite of the war for separation from Ethiopia, banned for years Amaharic songs from bars and other recreation centers in Eritrea, and were tirelessly working to either diminish or erase the cultural and civilization legacy of not only Axum, Zagwe, but anything that followed it. When such a project seems daunting and impossible, a revisionist narrative of a civilization that predates Axum, had lately been in vogue. When attempts to re-write the ancient history of the region is difficult and hard to convince, they promote, advance and perpetuate the Italian colonial period, as their identity.

Legend says that in the Ansaba region of Eritrea, St. Mary revealed herself to a shepherd girl in a little cave. The cave became a religious shrine, since the 14th century with both Christians and Muslims making long and difficult annual pilgrimages. The journey itself becomes a test of religious faith. There was not much for the pilgrims to feast their eyes on save for the cave and the traditional round-shaped hut of the Tewahdo Church. That is, until the 1950s and the growth of the architectural fame of Arturo Mezzedimi, who arrived as a young boy in Eritrea, to join his settler family.

Unlike the creed of Eritrean nationalists, the economy in the former Italian colony was growing and stable following the stagnation during the British Military Administration. Rich merchant families were commissioning the Italian architect to build them villas and other buildings. Among them is the famous Ba-Hubeshi high rise in Asmera. Luck came to him, when Emperor Haile Selassie noticed his exploits. Summoned to Addis Ababa, he played a critical role in the growth of modernist building, such as the lavish Adis Ababa Municipal building, the headquarters of the Organization of African unity, etc. Ruling over a conservative society in which religion played an important rule, Haile Selassie, launched the construction of churches, such as St. Stephanos and Debre Sina, and a beautiful mosque in Agordat. Indigenous and traditional design were in his mind. The particular interest of this short story is understandably St. Debre Sina. Jacopo Galli wrote about its Arturo Mezzedimi and the architecture in this way.

With this building Mezzedimi shows a deep understanding of and appreciation for his adoptive country’s traditional architecture. In Debra Sina, the new building is shaped spatially as a completion of the existing building. Reading the two elements as a single sequence of spaces, it is possible to identify the exonarthex, with two misaligned entrance doors, the main hypostyle hall with a square plan, and finally the old chapel, which can be accessed through a filter space. The sequence is the same as in Our Lady Mary of Zion in Aksum and the temple in Yeha: in this building the tripartite scheme is developed through a short narthex (quenē māhlēt), followed by a hypostyle room (queddest) in front of a deep altar (maqdas). [1]

His observation about the land scape is also noteworthy:

The new building designed by Mezzedimi is a pure cube in front of the existing chapel, built, due to the lack of infrastructural connections, entirely in stone carved from the nearby mountains. The modern building does not show any material discontinuity with the surroundings; it is the treatment of the material that differentiates the built structure from its context: the polish of the stone blocks gives the new church a perfectly smooth surface that contrasts with the hewn stone of the chapel, imperfect and wrinkled. The different treatment is used to distinguish the two volumes without creating a clear break: the two chapels are, in this way, dimensionally comparable, establishing a close relationship between the ancient sphere and the modern cube.

After its completion, things fell apart in Eritrea. The Zagwe-like church, located out of the main road and deep in the mountains, was also a contested area in the battle between Ethiopian troops and armed groups of first the ELF and subsequently of the EPLF. Incredibly, it weathered out all the years and survived all the calamities, until the end of the 30 (1961-1991) years of war of “liberation.” St. Debra Sina nonetheless remained arrested, forgotten and obscure for Asmara’s urban elites and the rest of Ethiopia. Italian era exotic buildings however fared much better.

The coming of the brief peace revived the fame of the villa fascio, or art deco buildings, particularly in Asmera, but neglected St. Debre Sina. It came with a disadvantage, for the Eritrean nationalists wanted to de-link any historical legacy and affiliation with the civilization in the south. Photography, which was used extensively for war propaganda by Eritrean nationalists, was understandably not used to popularize it. Except the single original photograph by an anonymous person displayed above, all other photographs available now, hide this marvel among the huge boulders, or leave it diminished. The fortunes of pre and fascist era buildings however were great. For example, the Italian church in Asmera.

The Seen: Church of Our Lady of the Rosary 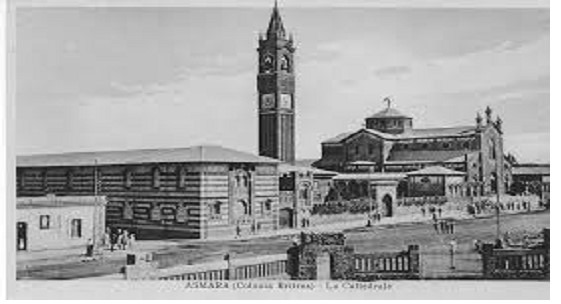 Despite the travails of the second war with Ethiopia (1998-2018), which isolated and ruined Eritrea for another 20 years; visitors and reporters from the West, rarely forget to exuberantly write about Italian architectural legacy. The ruling elite was helpful in accommodating and facilitating their stay and insuring the propagation of a different history and narrative from Ethiopia. The reward for the persistent efforts of the ruling elite resulted in the recent UN recognition of many Italian era buildings as a Cultural Heritage. The Church of our Lay of the Rosary is the most visible among them, stated a writer on the impact of Italian colonialism in Eritrea. Asked by the writer, about the famous landmark in the city, a number of Asmarinis, singled out the Catholic cathedral.[3]  “Hidden” somewhere from eyes of the incurious observer (in the perimeters of the famous La Cathedrale), is a memorial tablet from the 1920s. The name of the future architect of Fascism, Benito Mussolini is inscribed on the top. 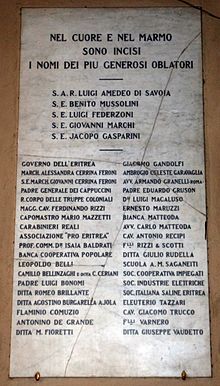 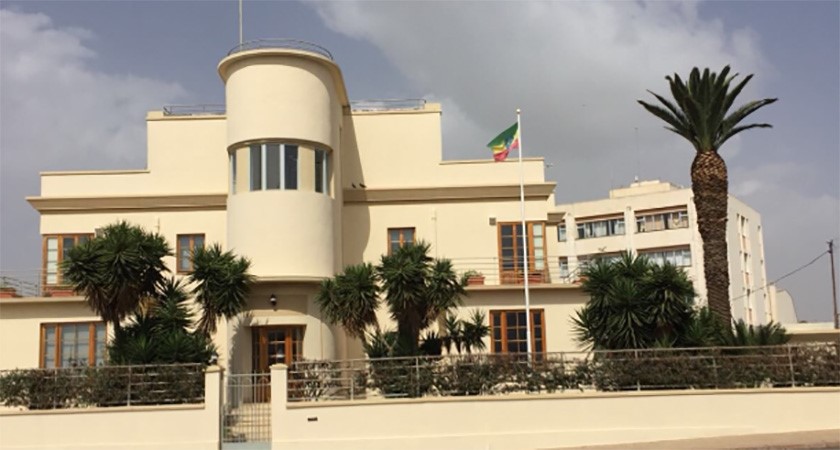 In July, 2018, the new elite rulers, who hail from a different ethnic group in Ethiopia, did their turn and came to Asmera, Eritrea, to inaugurate the opening of the new Ethiopian embassy. Led by President Isaias, the Prime Minister of Ethiopia and his entourage, the diplomatic guests walked the stairs, stood at the terrace and loitered in the premises; completely mesmerized by the old villa; oblivious of the historical legacy, like a bunch of naïve tourists. In the meanwhile, their host, Isaias Afwerki, relished his role. He appeared as if the villa and the other art deco buildings were commissioned and designed in his era. His guests did not mind it; they were in the “meddemer” nirvana. Nor did the large majority of traditional opposition to the old regime in Ethiopia; they believe they have risen out of the “Age of Darkness.”