“We are human beings”: The treatment of immigrants in Calais, France 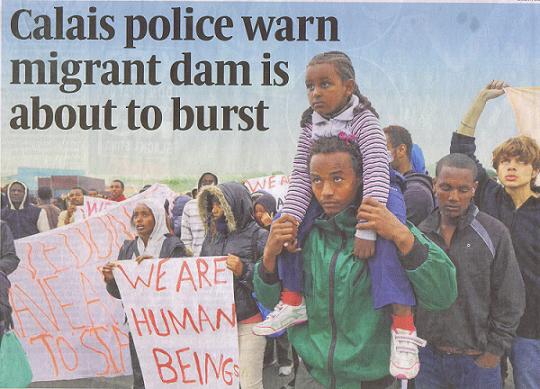 Friday September 5. The daily London paper Metro wrote,” Ferry companies have demanded security in Calais be improved after hundreds of migrants tried to storm ships bound for Britain. The group, thought to be mostly young Eritrean men, repeatedly tried to board the ferry until staffs raised the ramp and rushed in.  “On September 9 the Metro continued:  “Conflicts and crises in Libya, Eritrea, Sudan, Iraq, Syria and Somalia have led to surging numbers of migrants from North Africa.  Nearly 2,000 people have died trying to make the journey.” Among them are the 259 Eritreans, women and children drowned of the coast of Lampedusa/Italy in October 3, 2013.  This tragedy revealed the full extent of the horror the refugees are facing to reach a place of safety and freedom.

Their agony and desperation is reflected in one of the placards they carry during their demonstration in Calais against what they say is police brutality.  It says, “We are human beings”[1]

“Their plight raises fundamental issues of humanity compassion and sympathy.  In Calais some local people and other activists have demonstrated in their favour.  At the same time there were right wing groups who attacked them leading the French police to intervene.  These refuges are members of the human family and the international community has a duty to protect them.  Under the 1951 UN Geneva Convention it is right to do so.

European Union has a policy of preventing African and Middle Easter refugees and Migrants from entering Europe so that they can enact this right.  The United Kingdom and France aim to pursue this policy rigorously by building high fences and other obstacles so that migrants have no chance boarding ships that could take them to Britain.  There has been absolutely no debate so far as to how to settle the 1200 plus refugees and migrants stranded in Calais/France. Where do they want them to go?

Some Europeans perceive of the refugees as being attracted by life in the West. This is a justification that allows them to ignore the refugee’s plight and hardship and excuse to their indifference.  The Mayor of Calais Natacha Bouchart has said it unequivocally.  She blamed the British for providing   too many incentives that attract the immigrants to go to the United Kingdom.  It is quite rational to choose the United Kingdom rather than, for example Italy, where after they are served with a document permitting them to stay they are then shoved on to the street only to be rough sleepers.  Who in his right mind would want to be a refugee in Italy?   No accommodation or any help is given to start life in Italy.  It is the same in France.   It is  the  appalling conditions in Southern Europe rather  than the perception of the UK as “a land paved with gold” an “Eldorado” that forces refugees to come to the UK – contrary to what  the Mayor of Calais want the world to believe.

Migrants are not a burden to the host countries. They are hardworking people.  The United Kingdom has no tradition older than offering sanctuary to refugees. All its history teaches us their presence in the UK offers huge benefits – socially culturally and economically.  What is required to day is a fare policy towards refugees and immigrants that does not overstretch services like housing, health and education.

The world is interdependent.

The irony is while Europeans are complaining of the number of refugees entering Europe, they don’t hesitate to encourage their private companies to do business with the repressive regimes in Africa who are the underlining causes of flight of refugees.  The West is gaining far more lucrative profits from the third worlds than they give back in terms of aid and giving sanctuary for refugees. The world has become interdependent but the problem remains the double standard of the Western politicians.

For example the British Government has encouraged a number of mining companies to invest in Eritrea and a visit was recently led by a British Government official to facilitate contracts. A mining company named London Africa Ltd has recently been granted a license covering over 1500 square kilometres of Eritrea.   They have joined companies like Sunridge   Gold Corporation and   Bisha Mining Shared Co (BMSC). This is a real Gold rush like “El Dorado” in contrast to the asylum seekers desperately seeking safety in European countries.

What is sad is that many of these companies are using forced labour to extract the ore. The director of Human rights concern, the outspoken Elsa Chyrum, has recently wrote an article on Asmarino.com of the injustices and violations that the mining companies are responsible for in Eritrea.    (Eritrea: The use of Forced Labour at the Colluli Potash Project in Eritrea)[2]

There is a serious danger that Eritrea will follow in the footsteps of the Democratic Republic of Congo - the most mineral rich country in Africa. While the Congolese Diamonds are plundered by foreign companies the spoils are shared between these companies and the government authorities, while the people are living in permanent poverty.  The film Leonardo DiCaprio’s “Blood diamond” reflects such immense African tragedies, greed and inhumanity.

September 18, 2001 the harbinger of the Gross Human rights violations in Eritrea:

On September 18, 2001 the president of Eritrea arrested a number of prominent government ministers and generals (known as G-15) as well as journalists and religious dissidents.   They have all been incarcerated without being formally charged and no family members are allowed to see them.  September 18 is a day that is now commemorated by the Diaspora in opposition: civil societies groups, political and human rights organisations in Europe, USA, Canada, Australia and other places. The UK one will be celebrated on Tuesday 23 /09/ 2014 at Amnesty International from 2 to 5 pm.  All mark these sad anniversary- as the Eritrean Black September. Today there are more than 10,000 prisoners of conscience in Eritrea. To add to the list of repression the Government had started rounding up Pentecostal believers and put them to prison unleashing religious persecution in a large scale.  The most devastating move by the Government is the one way ticket that young people are given to serve in the military. This forced conscription is supposed to last for 18 months but in practice has often turned out to be indefinite.   Young people are denied to exploit their potential to study, to work, to make a family of their own and to pursue a happy life.  These appalling human rights violations have given rise to a huge exodus of young people into exile. The Eritrean economy is in shambles, gross human rights violations is incompatible with economic and social progress and the relentless brain-drain is damaging the economy.    Numbers are estimated at up to 4000 people a month escaping across the border[3].

The Role of the Eritreans in the Diaspora

A conference was held by ERSA-UK[4]   at which a heated debate took place among which is  on  how to help Eritrean refugees who are being trafficked into Israel with many being tortured or killed in the Sinai desert.  A BBC correspondent asked the guest speaker – senior legal advisor from UNHCR: “What are you doing for Eritrean refugees who are being prosecuted in Israel? The UNHCR representative promised to convey these concerns to the higher authority of UNHCR.   The BBC correspondence then put the question back to the Eritreans who were present. His view was that   British Eritreans are not exercising their rights effectively.  As a voter you can contact your MP brief him/her about kidnapping in Sinai and ask him to raise this issue with the British Government and demand that they contact the Egyptian Government to address the issue of kidnapping.  Eritreans in the UK could have far more influence if they are organised properly.  Another speaker presenting at the conference was the amazing Dr Alganesh Fesseha – Director of the Ghandi Humanitarian organisation – Her talk was accompanied by slide show of people kidnapped in Sanai.  Along with a local Bedouin Sheik she had freed a number of Eritreans who had been trafficked and kidnapped and who were being held chained for ransom in the Sinai. But the Diaspora is not organised enough to render support to any of her projects particularly the feeding program in Ethiopia. There are over 2000 unaccompanied children in Shimelaba, one of the refugee camps in Ethiopia.

Eritreans in the Diaspora are failing to lobby their MPs on these humanitarian considerations. This deficit could be addressed by Eritrean communities and civil society organisations building the capacity of Eritreans to lobby and influence government in the UK.

To care and help the Eritrean refugees, the poor and the marginalized. Doing so enriches our human family. More importantly to work together in unity will make a great difference. Let the UK take the lead.

[1] Photo of placards being carried next to a picture of a young Eritrean man carrying a child on his shoulders. (Sunday Times 07/09/2014).

[3] According to the International Organisation for Migration (IOM)

[4]“ Making a Difference to the lives of Refugees” a conference held on 16th and 17 August 2013 at UK Amnesty International This conference brought together Eritrean community leaders and community members from across the UK, as well as representatives from a range of different charitable organisations offering support services to disadvantaged people, particularly those from BAMER backgrounds.