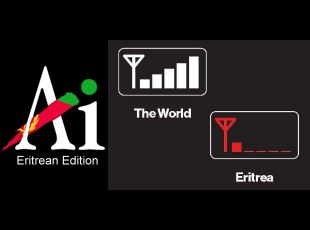 Asmarino.com has been despairing for years to make itself easily accessible to Internet users inside Eritrea. Now, with the availability of eritrea.asmarino.com, it hopes that users will have easy and fast access to the website.

One mechanism by which the Isaias regime keeps the masses inside Eritrea subdued is by keeping them misinformed. Now that the official media outlets like EriTv, Dimtsi Hafash and Hadas Eritrea have been totally discredited, the next best thing the government can do to keep the masses misinformed is by denying them access to information from outside. It denies foreign journalists free access to the country. Whenever it can, it jams opposition radios. But its most effective way so far has been to deny them Internet access. And that is understandable, given that the opposition’s literature is now mostly accessible through the Internet. Its tactics are crude but very effective: (a) curtail Internet use to as few people as possible; (b) make it painfully slow to access the websites; (c) monitor Internet Cafes through security apparatus; (d) make Internet access at private homes very expensive (even in Cafes it costs 20 Nakfa per hour [1]). And whenever a crisis seems to brew with a major news breakout, the regime has used this most crude but effective tactic: unplug the electric power to the entire city.

Among African states, Eritrea finds itself among the bottom in Internet use; less than 1 percent of the population has access to the web [2]; and, for most, only intermittently for the briefest of times in Internet Cafes.  When this hurdle is coupled with the very slow bandwidth and the high expense, you can imagine, this is not something that one is willing to go through to access any website. And since most of the people go to Internet Cafés to access the internet, the risk of someone trying to access an opposition website in such public places where the regime’s security men are lurking everywhere has to be multiplied by the time it takes. By shedding all those heavy items that encumber asmarino.com – pictures, videos, radios, etc – eritrea.asmarino.com makes it a lot faster to access the essentials of the website. What used to take painfully long time to access the website has now been cut to mere 75 seconds!

Here is what Bloomberg Businessweek has to say about the general condition of Internet in Eritrea [3]:

“Today, fewer than 1 percent of Eritreans go online, according to ITU. The Internet is available in a handful of places, including Asmara, the capital—but it’s almost always via dial-up and requires Zen-like patience. ‘Even after waiting half an hour, you might not get to the page you want,’ says Salem Solomon, an Eritrean-American journalist who attended college and worked as a reporter in Asmara. ‘Connectivity is very, very, very, very bad.’ Eritrea was the last country in Africa to get a V-SAT (very small aperture terminal) connection linking it to the World Wide Web and remains one of the continent’s only two coastal nations without fiber-optic connections. There are only 146 fixed-line broadband subscriptions in the entire country. A handful of residents get dial-up connections at home for about $200 per month, says Tes Meharenna, who runs the diaspora site asmarino.com.”

A more comprehensive report on Internet use in Eritrea has been done by Reporters Without Borders [4]. Under a subtitle “Technical barriers”, it says:

Telecom operator EriTel, which owns the network’s infrastructure, is directly controlled by the government. The Eritrean Ministry of Information granted a licence to the country’s four Internet service providers from whom EriTel rents its bandwidth. Since EriTel is under the authorities’ orders, network surveillance and slowing down bandwidth speed are easy tasks. …

In fact, most of the Eritreans who connect to the Web do so from cybercafés, since they cannot access the Internet from their cell phones. To enjoy private access, netizens need to obtain a high-cost special authorisation from the regime.”

Under the subtitle of “Intimidation of netizens: Arrests, blocking tactics, and surveillance”, it goes on to add:

“Sometimes surveillance and self-censorship are enough. The two other Internet access providers, Eritel and Tifanus, do not block opposition websites, since they know that the great majority of Eritrean surfers would never dare to openly consult them for fear of being arrested and imprisoned.

… It is commonplace for the authorities to intercept e-mails from individuals whom they consider “suspect.”

The forty-odd Internet cafés, most of which mainly operate in Asmara, the capital, and in two or three other Eritrean cities, are constantly closely watched, particularly during periods of social unrest, or when compromising news about the regime is circulating abroad. At least two cybercafés are said to have been closed in 2010 and their owners arrested. The official excuse was that they were used for showing pornography to young netizens.

In January 2011, several Internet users and bloggers were allegedly arrested in cybercafés, most of them in Asmara. Questioning such people has had a dissuasive effect on other Internet users.”

It is in light of all of the above that a fast access to a website is found to be necessary to meet the many hurdles put by the regime. And it is in that sense that we believe eritrea.asmarino.com meets this challenge.