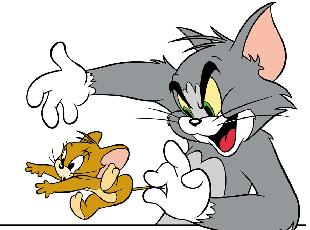 The Tom and Jerry Game with a Twist

It is said that Issayas enjoys the Tom and Jerry cartoon. Indeed he has on a number of occasions referred to the running around in the cartoon in public. Presumably he fancies himself to be the smart alec?? Jerry giving the bigger and stupid Toms of this world, the US, the Woyanes the run around and outsmarting them completely. If that is indeed the game that our Jerry has been playing for more than a decade now, the game is over or rather there is now a cruel twist to the game.

Our Jerry is mortally crippled and is unable to run around. He is completely at the mercy and in the pawns of the local Tom, the Woyane. This particularly evil Tom does not seem to be interested in finishing off Jerry and swallowing him whole. He just seems to be interested to give him a good spank here and a nasty pinch there, throwing him to the air and watch him land with agony. This particular game is now being played over and over again.

First it was Knin and Kinito. Issayas could do nothing but vacate these indisputably Eritrean villages and never attempt to recover them. Then there was the operation in the Southern Red Sea and the environs of Adi-Teklai. Both are said to have lasted less than an hour each and “brigade” sized units of the EDF were put out of action without any response from good old Jerry. The latest one is the operation around Deda and the 21st “division” of the EDF is said to have been put out of action again in less than an hour. All Jerry could do was to lob some artillery shells from time to time for some hours until the evil Tom took care of that too.

So why has the old Tom and Jerry game changed so radically? And what is the evil Tom up to? Let us take each question separately.

Over the past decades evil Tom has collected all the trump cards in his hands. Tom found himself in an uncomfortable position diplomatically when he found himself on the wrong side of the Boundary Commission. He maneuvered well to make sure that the Security Council limits itself to endorsing the delimitation decision of the Boundary Commission but not the Commission’s attempt to “demarcate” the boundary on the map. Once Tom assured himself this obscure but very significant victory he declared that he accepts the delimitation decision unconditionally and is eager to demarcate the boundary through dialogue consistent with international law and practice. By so doing he placed himself squarely on the right side of the Security Council.

In the mean time good old Jerry became more and more frustrated and began to threaten and mishandle the peace keepers in his country. This not only lost him the ‘moral high ground’ gained as a result of the prevarication of the Woyane but started the process of Jerry’s isolation from the international community. Jerry then became very angry and resolved to show the biggest Tom of them all - the evil CIA who is the boss in the Horn of Africa. Jerry was confident that by showing he can mess the region at will, he will convince big brother Tom that the only way he could protect his interests was by bringing old Jerry back to the fold as the “local cabo”. And so Jerry began dilly dallying with the Shebab terrorists, attacked Djibouti, was caught red-handed trying to engineer a terrorist outrage in Addis during the AU summit. Contrary to Jerry’s expectations these acts turned him into a despised pariah in the region, in Africa and earned him two Security Council’s sanctions that further curtailed his military capability. And so smart alec?? Jerry ended up running around the world to reach his final destination – a tiny and isolated cage under the control of the evil Tom – Woyane.

In the military field Jerry has always prided himself as being head and shoulder above everyone including the Woyane. He therefore decided to build the largest army in the whole region by mobilizing every able-bodied person and remold the whole lot through physical labor and all kinds of hardships. More like the labor camps of the red-guards that Jerry saw firsthand in China during the Cultural Revolution and that he practiced in the Sahel days. Evil Tom seems to have been quite pleased with Jerry’s strategy. Tom knew of course that demography will have its final say and decided to mobilize the same number of people that Jerry did. Jerry has to take one from every family causing enormous strain on society. Tom had to take one out of 20 – 25 families to match Jerry’s effort and that did not cause social strain, on the contrary it may have served to reduce youth unemployment.

Once Jerry had all the able-bodied persons of the nation under his control he took another page from the red-guard book and decided to transform the economy through the unpaid “revolutionary” labor of the masses, to limit to the maximum extent the opportunity for the “exploitative” capitalists. He felt he could kill two birds with one stone just like the red-guards tried. He could remold the whole society through hardship and physical labor and at the same time achieve economic miracle through mobilization of captive labor. A decade after the experiment the results are in for everyone to see. All the youth have gone AWOL (Absent –With-Out-Leave). The social and economic crisis has deepened. Everyone particularly the youth are completely disillusioned with the regime and are eager to see the back of the regime. As a result, the biggest standing army that he envisaged is an empty shell. Those few in the army have no will to fight. Those very few who may venture to fight have inadequate supply to sustain any meaningful operation. And so Jerry ended up with all four limbs paralyzed and ensconced in a tiny cage with Tom the Woyane breathing down his neck.

In the mean time Tom the evil Woyane spent the last decade engineering the biggest boom in the nation’s history nearly a decade of double digit growth of the economy. He added a massive economic advantage to his already massive demographic advantage to look like a veritable elephant in the eyes of poor old Jerry. Hence the new Tom and Jerry game where paralyzed and captive Jerry has become the plaything of Tom the evil cat. This brings me to the last question what is the evil Tom up to?

It can be safely assumed that Tom is fully aware of the defenselessness of Jerry. After all more of Jerry’s Army must have passed through Tom’s refugee camps than are in Jerry’s Army and Tom must have listened to all they had to say. More specifically the most recent operations must have proved to Tom that he can do as he pleases with Jerry without Jerry doing anything about it. So why does not Tom do the greedy cat thing and gobble up poor old Jerry? Various theories have cropped up in recent weeks.

There are those who still call the twisted road bear Keren Libi Tigray and who insist that Tom is watching for Jerry to declare war in frustration and/or launch a desperate sizeable operation. As soon as that happens, the evil Tom is going to once again declare his country has been invaded and gobble up Jerry without any fear of the possible international consequences of such an act.

There are those who take note of Collin Powell’s dictum – if you break it you own it. They suggest that if the Woyane were to carry out full scale invasion of Eritrea the EDF would crumble in no time as indicated by its response to the recent operations and Eritrea could become a failed state. Tom would be saddled with the enormous burden of another failed state on his border which could seriously jeopardize his project for economic growth and transformation. The Greedy beast that he is he seems to have opted for wealth and thus to keep poor old Jerry to his own devices in his paralyzed and caged state.

The third theory I have come across is that Tom is playing around with Jerry to show him and his constituency that he is indeed in the tender mercies of his enemy – that he is totally incapable of defending himself vis-à-vis Tom. We all know that the single selling card of Jerry has been his military prowess and his capacity to defend the nation. Tom is very visibly and publicly shredding this myth. The theory that follows is that Tom is doing so to eradicate Jerry’s sole source of legitimacy which could then lead to regime implosion in the not distant future. I am sure more theories can and will be concocted as time goes by. The important thing is to analyze and discuss the new Tom and Jerry game and come up with a well considered option for the Eritrean opposition. But, as they say that is for another day.