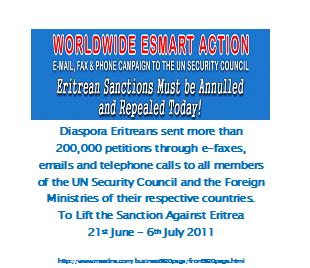 There has recently been a concerted campaign to rally Erirteans in diaspora in protest against the Security Council sanction imposed on Eritrea.
This has involved thousands of emails, faxes, phone calls and signatures on petition brought about by the usual regime cadres, supporters and in the embassies exercising their authority on diaspora Eritreans.

What are these sanctions?

How do these compare to having no independent judicial system, no universities, no freedom of speech, no religious tolerance, no constitution, no free press, etc. and no food?

Would all this energy and effort not be better employed by drawing the world’s attention to the horrifying conditions under which the average Eritrean tries to survive? To the fact that the reality of Eritrea is that if you queue for a piece of sorghum bread at three in the morning and then complain that there isn’t any, you might be led away at gunpoint and never seen again.

Is this what Eritreans in diaspora are trying to protect? Who do they want to protect – the citizen who needs bread and the right to complain about its absence, or the soldiers, probably conscripted and also under pressure, or are they trying to protect the wealth of a president and his cronies who are sending arms and money to terrorist groups which kill their own people in Somalia?

Should they be protecting an elite few who will be the ones who benefit from the Eritrean Mining Project, a natural resource which should be nationalised and administrated by dedicated parties such as the Ministry of Mining and the National Bank of Eritrea rather than a 3 – people company consisting of  Hogos Ghebrehiwot (Kisha), Yemane Gebremeskel (Charlie) and Berhane Habtemariam (Eritrea’s Auditor General).

The historical record will show that these groups of Eritreans in diaspora did nothing to lessen the suffering of Eritreans in Eritrea while relentlessly campaigning against largely ineffective sanctions and while having full access to the facts of what is really going on in Eritrea.

History will show that when their people were suffering through the brutality of Isaias Afewerki’s regime, these Eritreans in diaspora actively supported that regime thereby making life even harder for those in Eritrea who so much needed their help.

We live in an age where no amount of repression can block out the truth because of the technology available providing evidence on a second-by-second basis.

The evidence is out there, on film, on video, digital, written, and otherwise stored. Emails bearing testament to the evil doing in Eritrea will still be available in the future when the emails coerced by these organisers will be shown up for the lies they are.

What will be their excuses then? How will they be able to say they didn't’ know?