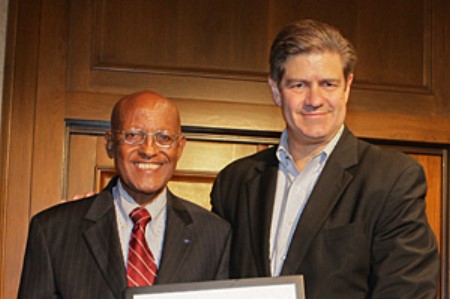 Araya Debessay, professor of accounting and management information systems in the University of Delaware's Alfred Lerner College of Business and Economics, has won a 2010 Ernst and Young Inclusive Excellence Award for Accounting and Business School Faculty.

The award honors five faculty members from across the country who have had a significant impact on diversity and inclusiveness within their business schools and universities.

“I am humbled to have received this award from Ernst and Young and I will take it as a reminder of the work I need to continue,” said Debessay. “The University is surely making impressive strides toward achieving its diversity, inclusiveness and equity goals and in creating a welcoming environment that celebrates diversity. However, we must continue to make efforts in these areas.

“I am also very pleased that the award will give visibility and publicity to the University's efforts in promoting diversity, inclusiveness and equity,” Debessay said.

Bobby Gempesaw, dean of the Lerner College, said that Debessay was most deserving of the award.

“Prof. Debessay has played a critical role in attracting and advocating the hiring of underrepresented groups in faculty, professional and administrative positions,” said Gempesaw. “He has contributed so much in making UD a more welcoming institution to diverse members of the faculty, staff and students. I am very pleased that he is honored with this award to recognize his three decades of promoting inclusiveness, equity and diversity.”

According to Guido Geerts, chair of the Department of Accounting and MIS, Debessay is the embodiment of diversity at UD.

“For Prof. Debessay, promoting diversity is not 'just another thing to do' -- it is part of his daily activities,” said Geerts. “For example, in the '90s he served as the chair of the President's Commission to Promote Racial and Cultural Diversity. It was during this time that the African Heritage Caucus, the Latino/Latina Caucus, the Asian and Pacific Islanders Caucus and the Lesbian, Gay and Bisexual Caucus were formed and still function today. These are accomplishments beyond measure.”

Francis Kwansa, associate chair in the Department of Hotel, Restaurant and Institutional Management, served on the Commission to Promote Racial and Cultural Diversity while Debessay was co-chair.

“Under his leadership, he created caucuses for underrepresented constituent groups on campus with the purpose of providing representation and a means of advocacy for them,” said Kwansa. “When I was chair of the commission, I found it to be an invaluable mechanism for promoting inclusiveness on this campus.”

Patricia Plummer Wilson, vice president and chief of staff at UD, wrote in her nomination of Debessay that as co-chair of the Diversity Task Force, he co-authored a Diversity Task Force Report that “was excellent and provides important guidance for moving the University of Delaware forward on its Path to Prominence.”

Michael Vaughan, senior assistant dean in the College of Engineering, worked with Debessay on the Diversity Task Force when Debessay served as co-chair with Edward F. and Elizabeth Goodman Rosenberg Professor of Sociology Margaret Andersen.

“He did an absolutely outstanding job in providing thought leadership for our intensive deliberations,” wrote Vaughan in his nomination of Debessay. “It is clear that the Diversity Task Force's final report to President Harker was guided, in large measure, by the insight, professional commitment and personal investment so eloquently exhibited by Araya.”

“I am speaking not only for myself but on behalf of many African students who graduated from UD when I say that Prof. Debessay is an icon of hope, a supportive mentor and an excellent role model,” wrote Hidrue in his nomination. “If awards are recognition for outstanding contribution, I cannot think of anyone more deserving for the Ernst and Young Inclusive Excellence Award.”

Debessay currently serves as co-chair of the UD Diversity and Equity Commission, and chairs the UD Building and Nurturing a Welcoming Campus Climate Committee, the UD African Heritage Caucus Board and the Department of Accounting and MIS Teaching Advisory Committee.

He holds a master of business administration and doctorate from Syracuse University, and is an advanced fellow at the UD Institute for Transforming Undergraduate Education.

As an advanced fellow, Debessay receives hands-on experience in employing active learning strategies, specifically problem-based learning and the effective use of technology in his courses.

Debessay, who also holds certifications as a public accountant, management accountant and internal auditor, joined the UD faculty in 1978. Prior to that, he began his teaching career in the 1960s in Dekemhare, a small rural town in what was then an Eritrean province in northern Ethiopia.

His research interests include inflation and behavioral accounting, problem-based learning in accounting and Eritrean studies.

The award winners were publicly announced Aug. 1 by James Turley, CEO and chairman of Ernst and Young, at a reception during the American Accounting Association annual meeting in San Francisco.