While the Director of PRIO may be a relevant commentator on the issue, his speculations do not confirm, nor endorse, any candidate, and are not in any manner based on privileged access to the decision-making of the Norwegian Nobel Committee. Neither the Director, nor the Institute he leads, have any form of association with the Nobel Institute or the Norwegian Nobel Committee. Read more here.Each year, PRIO Director Kristian Berg Harpviken presents his own shortlist for the Nobel Peace Prize. He offers his opinion on the most likely laureates, based on his independent assessment. The PRIO Director’s view on the most likely Nobel Peace Prize laureates is widely covered by international media, and it has been offered since 2002.

The Norwegian Nobel Committee bases its decision on valid nominations received by the 1 February deadline (in addition to potential nominations put forth by the Committee members at their first meeting after the deadline). Anyone can be nominated, but only a number of people have the right to nominate, including members of national assemblies and governments, current and former members of the Committee, Peace Prize laureates, professors of certain disciplines, directors of peace research and foreign policy institutes, and members of international courts. The Director of PRIO holds such a position, but, as a principle refrains from making nominations, given his active role as a commentator. The laureate is normally announced at 11 o'clock on the Friday of the first full week in October.

In 2015, Harpviken’s favourite is Mussie Zerai, the Catholic Priest of Eritrean origin who resides in Italy, and whose widely distributed phone number has been the last hope for many desperate refugees aboard brittle boats crossing the Mediterranean. Number two is Novaya Gazeta, the newspaper that continues to challenge political developments in Russia and its immediate neighbourhood, despite the loss of several of its journalists in violent attacks. Third on the list is Iraq Body Count, for pioneering civil society monitoring of war casualties and proving its importance for ethical accountability. Number four is Article 9 Association, working to preserve Article 9 in the Japanese constitution, which renounces Japan's right to engage in war or to maintain military forces capable of engaging in war. The fifth and final suggestion is for a combined prize to Zainab Bangura and Denis Mukwege, who in their different capacities stand at the forefront of the global struggle against sexual violence. 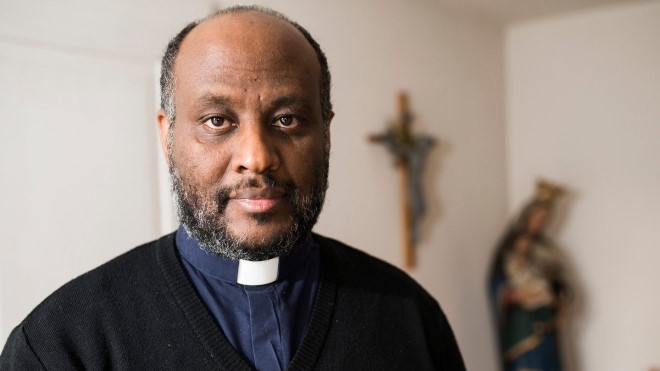 Mussie Zerai is a Catholic priest, who combines his duties for the Eritrean Catholic community in Switzerland, with running the Agenzia Habeshia, a charitable trust he set up in 2006 to campaign for the rights of North African refugees. His phone number is widely shared by migrants waiting for the risky trip across the Mediterranean, who call him if in distress, with Zerai conveying the reports to the rescuers. Occasionally, he appears in the media to place responsibility on those who could have prevented the deaths on sea. ‘I don't encourage anybody to come to Italy, or Europe in general…’, states Zerai, ‘these people must flee in order to save their lives’. The migration across the Mediterranean is an escalating humanitarian disaster, and Europe struggles with how to respond. Worldwide, migration caused by war, economic scarcity, and environmental change, is also increasing dramatically.  A Nobel Peace Prize to reward the courage and moral integrity of a single person seems particularly timely this year. One alternative candidate, amongst many, who would speak to the same cause is Giusi Nicolini, the mayor of Lampedusa, the Italian island which has impressed the world with its humble hospitality and insistence on the dignity of the refugees reaching its shores.

The space for independent media is shrinking in Russia, with the newspaper Novaya Gazeta impressively holding on to the principles of journalism, despite severe costs. Independent reporting and free media is widely seen to positively contribute to peace, holding governments and others accountable. Despite of this, no peace prize has been awarded to the media. With Russia’s state security apparatus have severely restricting the space for public expression, drawing attention to its few remaining independent media. The Novaya Gazeta was set up in 1993 at the initiative of Mikhail Gorbachev, who devoted part of his Nobel Peace Prize money for the purpose. The newspaper has since experienced the killings of several of its journalists. Its website has been exposed to numerous cyberattacks, and more recently, to policy ransacking and threats of closure. There are other leading media outlets in Russia that could merit similar attention, including the Echo of Moscow radio station and the TV station Dozhd, but Harpviken believes Novaya Gazeta is the more likely candidate.

There is an old dictum that the first casualty of war is truth. Docfumenting the real term impact of war, though, remains critical to an informed public debate, to holding the parties to war accountable. The Iraq Body Count was established in direct response to the resolute statement by General Tommy Franks, who led the invasions of Iraq and Afghanistan during his time as head of US Central Command, that "We don't do body counts." The Iraq Body Count is based in the UK, founded by John Sloboda and Hamit Dardagan, and engages a group of academics and activists who were critical of the 2003 intervention in Iraq. They employ a fairly rigid methodology, using mainly English media sources, cross-checked and supplemented by various other information. The entity is as often criticized for being one-sided as for being overly cautious in its estimates. A prize to Iraq Body Count would underline the importance of credible documentation of conflict, and send a strong signal to parties waging war about their responsibility for monitoring its impact. Other candidates here would be the Syrian Observatory for Human Rights (less stringent methodologically, but, in the absence of other sources, frequently cited), or the Human Rights Data Analysis Group (methodologically the gold standard, covering multiple countries, but less visible in the public domain).

Institutions matter and constitutional principles matter, particularly when rooted in popular support. Article 9 of Japan’s constitution says that the state will abstain from ‘the right of belligerency’, and that it will ‘forever renounce war as a sovereign right of the nation and the threat or use of force as means of settling international disputes.’ In Japan, a large part of the population sees this non-aggression commitment in its constitution, effective as of 1946, as the main cause the country has stayed out of war ever since. In a regioncharacterized by deep tensions, there are concerns that the 2014 reinterpretation of Article 9 by Prime Minister Shinzo Abe’s government is the precursor of armed confrontation. A number of entities are working for the preservation of the clause. One of them, which Harpviken sees as the most likely candidate for a Nobel Peace Prize, is the Article 9 Association, set up by a group of nine senior academics and cultural personalities, including Kenzaburo Oe, a former Nobel laureate in literature. One member of the group, Yasuhiro Okudaira, passed away on 26 January 2015. The same cause could also bring attention to other initiatives, including Nihon Hidankyo: The Japan Confederation of A- and H-Bomb Sufferers, and Ms. Naomi Takasu, who has been spearheading a civil society campaign to bring international attention to the threatened constitutional clause.Those working for the preservation of article 9 see international recognition – such as the Nobel Peace Prize – as important for what they perceive to be a basic national value. We may have come to think of wars between states as virtually extinct after the end of the Cold War, but events in Ukraine and simmering tensions in East Asia remind us they may reappear, and a return to a principle often hailed in earlier periods of the Peace Prize would be well timed.

Sexual violence follows war and often takes on forms both during and in the aftermath of armed conflict. Two personalities that are currently at the lead in the global fight against sexual violence are Zainab Bangura andDenis Mukwege, one with a governmental and UN background, the other from a medical and civil society platform. Ms. Bangura is the UN Special Representative on Sexual Violence in Conflict. Appointed in mid-2012, Bangura hails from Sierra Leone, where she has, amongst other things, served as minister of health and sanitation. Now in charge of an increasingly outspoken UN, at a time when sexual violence in war is a central global concern, a prize to Zainab Bangura would reward not only her, but also her organization. Denis Mukwege, a gynaecologist  offers medical treatment to survivors of sexual violence. In 1999 he founded the Panzi Hospital in Bakuvu, DR Congo with a primary purpose of taking care of victims of sexual violence. Apart from having treated thousands of women and being considered one of the globally leading experts on repairing the physical damage from rape and sexual violence, Mukwege is a grassroots hero in DR Congo and one of the world's most visible advocates of combatting sexual violence [For the sake of transparency, it should be noted that PRIO researchers are collaborating with Mukwege and the Panzi Hospital for a research project on female empowerment]. Other possible candidates, on the same topic, are actress Angelina Jolie, UK foreign secretary William Hague, and the Colombia’s civil society group the ‘Butterflies’.

Nominations for the 2015 Nobel Peace Prize

The list below attempts to reflect all confirmed and possible nominations, and is based on available information in the press, on the web or provided to us directly. The list is not quality assured in terms of whether the nominator is eligible, nor as to whether the committee indeed has received a nomination letter.