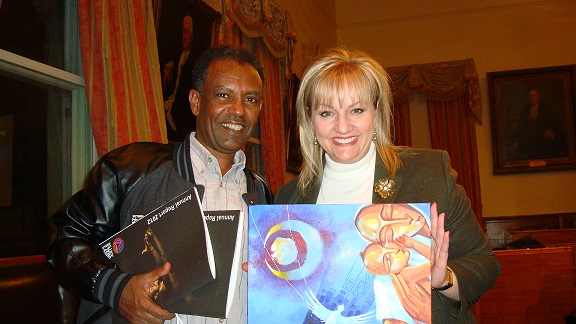 Eritrean-born artist Michael Adonai is one who believes art can show artists´ inner emotions rather than his objective observations. His own style, a combination of ‘Coptic’ and realism, is internationally recognized. He was selected as a participant of the 3rd Art Camp by UNESCO, and was recently featured in the Dictionary of African Biography (DAB) published by Oxford University Press. Michael is now a resident of Wyndham and is keen to share his talents with his new community.

Many artists of the twentieth century were experimenting with ways to convey their feelings through art. Michael aims to reflect the African culture with a different view on the traditional way of looking at the world: through the soul of his people. He calls himself ‘obsessive admirer’ of the harmony of the Eritrean people also during difficult times. “In Asmara, we have 11 months with sunshine. Can you guess how gorgeous our environment is? Plenty of bright, colorful, warm and joyful!. We´ve got 9 ethnic groups living together. No religious problems in centuries even though there are Christians and Muslims. God gave a gift to this people: the unity.”

In Eritrea, the first paintings of the ancient orthodox churches – colorful Coptic art styles – are believed to be of Egyptian and Syrian Christian Missionaries who reached Africa through Eritrea, in order to preach the Gospel. “I love my country. I grew up in its culture. I´ve taken the character that represents the peoples’ lives to show the world how we are. My Eritrean Traditional art was influenced by the Coptic style and what pushed me to use vivid colors and fine brushstrokes to spring the sense of energy and hope through my work.”

Even as early as seven, Michael was following in his artist brother’s footsteps. Berhane Adonai was ten years senior to Michael. Later he was approached to join an art courses in Fine Art at the EPLF Cultural establishment in Arag. “But not only attending this study I felt the explosion for the art. I travelled along the high and lowlands of Eritrea and around the world and I saw other cultures that fed my imagination and the aesthetic taste,” he says.

His works have been exhibited in the USA, Europe, the Middle East, Singapore and Japan. Today, he is a bestselling painter, muralist, cartoonist and teacher as well as author. He has written a number of award-winning books and dramas. Also, one of the three great Eritrean personalities chosen for Dictionary of African biography – the first biographical dictionary covering the lives and legacies of notable African men and women from all periods and walks of life – published last year by Oxford University Press. This is an important achievement for Michael and as one of the most prominent figures in the contemporary Eritrean Art, Michael feels that he could be a kind of Art Ambassador in Australia.

“Altona was the place where I held my first exhibition since coming here in November. It was held at the Joel Gallery with the help of wonderful local friends. I am expecting to have my solo exhibition soon and hope to start teaching classes to young and promising artists. I am grateful with this community for giving me the opportunity to show part of the beauty of my motherland,” says Michael.

He recently met the Minister for Arts in Victoria and gave her a painting as a gift. The event was organized by Multicultural Arts Victoria. “It was really a marvelous opportunity. The painting given to the minister is entitled “The Messenger”.”

Michael says that with 30 years of experience working as a professional and full-time artist, that each artist is an individual and every work of art unique. “I have been to the Melbourne Art Gallery and Australian Centre for Contemporary Art (ACCA) to see Australian art. In this field we all use the same medium. Art is an universal language with different approach but common components. Every work is complementary in this art environment and can leave a mark in one period of the art history”.

You can see the artwork of Michael Adonai in: http://michaeladonai.net/