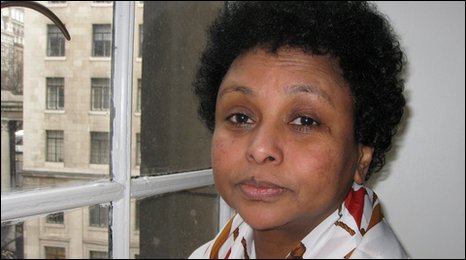 Ian Brimacombe reports on a woman who fought in the Eritrean struggle for independence from Ethiopia. She was just 13 when she became a soldier. She spent the next 16 years fighting in a brutal guerrilla war.

Meriem Omer began her life as a girl soldier in 1976.

"I joined the cause voluntarily. I felt like I had to do something," she told the BBC's World Update programme. "It was a hot political situation. I saw villages burning. I was surrounded by war. The regime was imprisoning many people. One of them was my father."

"In the battlefield, you could be as aggressive as a man and as merciless as a man"

She was in sixth grade when she saw him dragged from the family home and thrown into the back of a van.

He was taken to a high-security prison where he was tortured, and she never saw him again.

"I felt so sad that my dad was in prison," she says, "he was my role model and I couldn't bear it."

"The feeling that creates in a human being - whether man or woman - it's a feeling of revenge."

Meriem Omer's story is remarkable, but not unique.

It is thought that about a quarter of the soldiers in the Eritrean rebel "Popular Front for the Liberation of Eritrea" or EPLF were women, and in many instances, girls.

WOMEN AT WAR
The conflicts in Iraq and Afghanistan are the first in which tens of thousands of women have fought alongside men for prolonged periods. This week the BBC World Service is taking an in-depth look at women's stories from the frontline.

They left the traditional world they knew to join Marxist-inspired guerrillas who espoused equality between the sexes.

"That mentally and physically prepared me to carry a gun," she says.

Today she still recalls vividly what it was like to fight.

"In the battlefield you could be as aggressive as a man and as merciless as a man," she says.

"Physically we were not the same as the men, but we would double the men's efforts to be seen to equally participate in the battle."

She also remembers how gender was never much of an issue.

"We were assigned equally, like men, to the front-lines," she says. "Women were very important to the revolution."

She says the aim of the organisation was to bring about social change and, therefore, it wouldn't have been able to do without women - from feeding the army, to providing information and support.

"That's why they included the rights of women in the military code. The role of women actually changed the attitude of men," she says.

Thousands of young women participated in the struggle. Some of them even became commanders of tank units.

Ms Omer says she felt a sense on empowerment but, as a woman at war, she says she knew she also faced additional risks.

"We were more vulnerable than men," she says. "Boys would be tortured, but women would always be raped and tortured and ultimately killed. I never liked that idea, so I would have killed myself before I would be captured."

The revolution was a long drawn-out affair. Eritrea only emerged from its war of independence in 1993.

After feeling the euphoria of seeing the fight for freedom won, Ms Omer fell out with the new Eritrean authorities and was eventually exiled.

She moved to the UK where, until last year, she was involved with an Eritrean organisation that supports a network of Eritrean diaspora communities across the world.

Now she helps run a family business in Sweden. She remains a staunch opponent of the Eritrean government.

Meanwhile, the tradition of women in the Eritrean military continues to this day.

The country remains one of the few places in the world where women are drafted to fight alongside men in combat roles.

But Meriem Omer says the picture is depressing for women conscripts.

"They are kept against their will," she says.

"There is no battle to fight. It's just military service servicing the officers' needs. They are really not happy."

It may be because of the Swedish way of life, but she says she has also seen the bigger picture.

"The experience of that conflict made me learn and grow up and believe in negotiation and peace," she says. "It's not always a solution to carry a gun and fight."

You can listen to the BBC World Service series on Women at War on World Update all this week until Thursday 18 February.