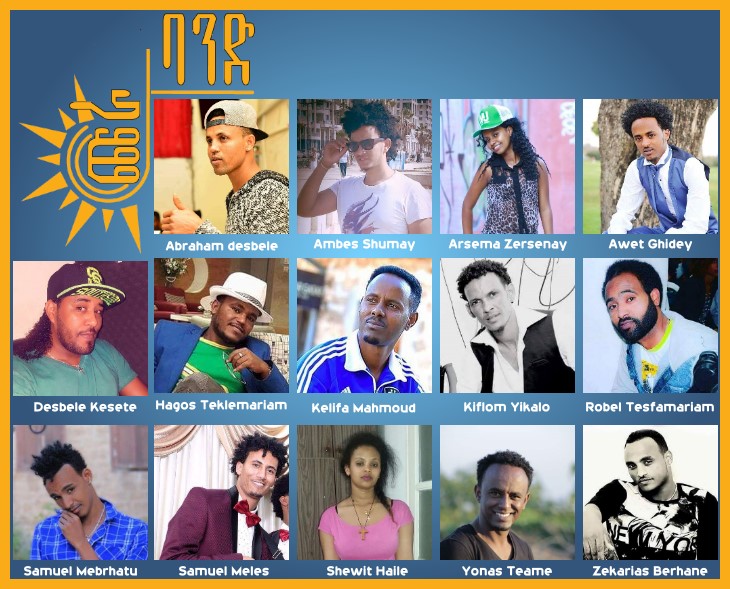 Bright Emission of a Ray of Hope from Tel Aviv

If anyone listens to the sound of the Tel Aviv-based Chura Band, a group of energetic, talented and highly artistic Eritreans who left home due to the prevalent human, social and political calamities, will be deeply moved by the experience.   The group is composed of 12 members within the age range of 22-35. Their sound depicts the painful experience today’s Eritrea is going through – a country that provides no prospects or hope of success in young people’s future.  This post-Badme generation has somehow managed to capture that very essence of the Eritrean tragedy.  Their lyrics reflect the stories of the repressive nature of the government, the plight of the Eritrean boat people, and those who continue to cross the Sahara desert at great peril.   What has become of this once promising country is mind-boggling, and the members of the band are victims of its waywardness.

To many of the young Eritreans who took up residence in Tel Aviv, the city is fine because it is located on the country's Mediterranean coastline - close to home, but it is not home.  Yes, south Tel Aviv may be inhabited by thousands of young Eritreans and yet it is far from providing the amenities of home.  At least the sun, just like in our beloved Asmara, shines most of the time. Palm trees grow here and there in their crowded and poorly maintained quarters – faint reminders of ‘Godena Harnet’.  And the sea beckons memories of Eritrea’s long coastline as it dances between shores.  The Chura Band, however, is endeavoring to create an atmosphere of home away from home for its audiences.

The young musicians/campaigners, like the rest of their fellow Eritreans, are lost along the shores as they struggle to make sense of what happened to them and theirs.  Thoughts of home won’t let go and the emptiness deep down their souls is reflected in their sad and heart-wrenching songs. ‘We are Eritreans’, they sing, as if the shores of Tel Aviv are listening.  They sing about their mourning mothers, ailing fathers, lost siblings and broken homes for the world to listen.  And surely Asmara is listening.  As their spirits soar, their messages glide towards the shores of Eritrea and perch on the branches by the country’s conscience.

Asmarino.com had a chance to talk to Robel Tesfamariam, the band chair, who has an important job in directing and keeping the band going. According to him, a three-year-old band is a group of musicians, lyricists, vocalists, performers and of various other professions who have come together to make a difference in their world, and of course that of their countrymen, through their songs. Robel told us of the commitment of the Chura Band towards its audiences, in their immediate surroundings and beyond.  He is a highly motivated and inspirational individual whose modesty is infectious.

Members of the Chura Band are not only artists but staunch activists as well.  Many of them knew each other back home – in the national service, the music department and the zoba spheres.  Their members, such as Zaki Berhane, a gifted vocalist and an accomplished kirarist, Sami Mebrahtom, the soulful vocalist, Kuflom Yikealo, the impassioned performer, Awet Ghidey, the utter virtuoso, Yonas Teame, the awe-inspiring soloist, are self-contained artists who can bring the house down, so to speak.  They have other members who are equally impressive – Shewit,  Arsema, Samuel Meles, Hagos Teklemariam, Abraham Desbele, Desbele Kesete whose stories we will cover as we get to know them in the future.

Many of the band members have full-time jobs; they work for 10-12 hours a day. ‘Making music while struggling to make ends meet and raising a family is not easy’, Robel said.   It is widely reported that life in Tel Aviv is tough.  It does not offer the musicians a peace of mind. Those who understand Eritrea to its core argue ending the perpetual uncertainty and unending ordeal of Eritreans in Israel is a moral imperative.

Members of the Chura Band are products of that poorly managed country of ours.  They represent the restless and angry generation of today’s Eritrea.  Indeed Eritrea went through stages of hardship and successive betrayals.  When our fathers brazenly sold Eritrea in the 1950s and 1960s, the young rose up against them to reclaim the squandered land. Now we are witnessing history is being repeated once again.  The leaders of the fighting forces who liberated the country at a great cost sold their souls to the devil to deny Eritreans to enjoy the fruits of our martyrs’ labor.  They squandered so many opportunities the country’s young are fleeing by the thousands every week.  This tragedy is intensely reflected in the band’s music.

The 30,000 strong youngsters living in Israel are a large portion of our society.  There are larger groups living elsewhere.  The country is losing its young at a rate that will eventually bleed its population dry. But Chura Band is trying to bridge the distance through their sweet sound.

In this post-Badme era Eritrean musical culture has really broadened and developed. Its scope is wider, and many of today’s artists reflect the reality of life in the country. There’s a sense that the diaspora, just like in the olden days, is rallying behind artists such as Chura Band.  However, Eritreans all over the world should do better to support our artists in order to compensate for the emotional and inspirational support they are providing us with at a great personal cost.  We need to set the record straight in our hearts and the depths of our souls. We owe them a lot – let’s aim higher to be counted among these bright stars.

Knowing the Chura Band is just like finding a ray of hope at a lonely moment.  We believe that the resolve of these young artists can be a life-shifting exercise.